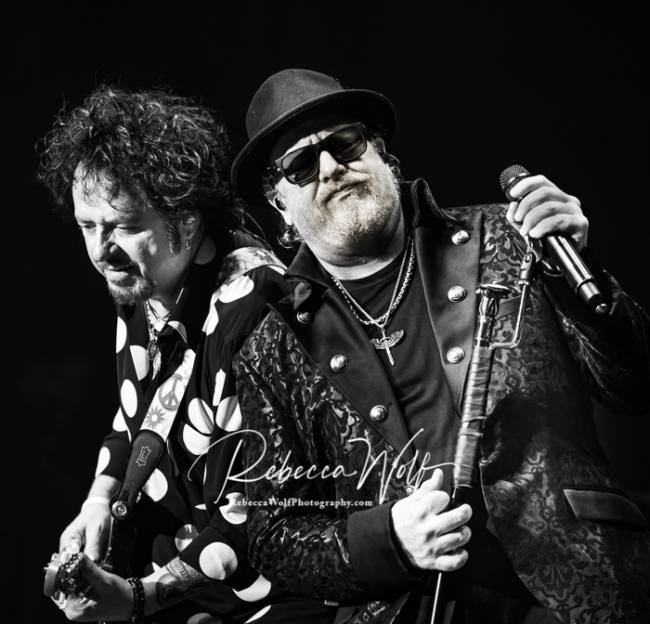 As the announcement came that Toto would make its last performance on Sunday, October 20th, I felt a sense of honor at having had the opportunity to not only attend, but shoot one of their final performances. On stage at Bergen Performing Art Center, with boundless energy, enthusiasm and spirit, there was no outward indication that a mere few shows later the band would be hanging up their collective musical instruments and putting Toto to rest after 40 years. While Steve Lukather remained Toto’s only constant member since the band’s inception, several musicians who’d been in and out of the band during the past 4 decades were part of the group’s final ensemble.  The connection between the band members was evidenced by the banter between Lukather and several individuals, in-between songs. Chuckling at something said unintelligibly, Lukather commented to the audience with a smile on his face, “Sorry for the laughing but I’ve known some of these guys since we were teenagers!”  Now I was smiling. How fun and rewarding that must be.  To think about teenage boys, enthusiastically playing in their newly formed band, never realizing they would ultimately sell over 40 million albums, win Grammy Awards and play on stages across the country and the world over the next 40 years!

Founding member of Toto, singer-songwriter and keyboardist David Paich, responsible for much of the band’s songwriting, performed with the band through 2018, but took a leave due to medical concerns during the past year. However, on their final performance, Paich returned to play with his band as they performed their iconic song “Africa,” followed by encore, “Home of the Brave.”  During the Bergen PAC show, the keyboards were phenomenally played by 27-year-old Dominique ‘Xavier’ Taplin (formerly with Prince), who was breathtaking to watch and listen to. Given the stage to perform a solo on his double keyboard, Taplin’s classically trained fingers flew swiftly and expertly across both sets of keys. All audience members were transfixed during his several minute solo performance. Even more astounding was learning from Lukather how quickly Taplin gained the expertise playing Toto’s catalogue, as he’s only been with the band for a brief period.

Playing bass and performing vocals as a touring member of the band since 2017, Shem von Schroeck was a formidable presence on stage.  Looking like he spends as much time at the gym as he does playing bass guitar, von Schroeck has developed both his physique and his musical talents. Introducing von Schroeck to the audience and commending him on his musical skills, Lukather, with a grin on his face, teased von Schroeck that he needed to spend more time working out. Von Schroeck has large musical shoes to fill in the band, as he follows in the footsteps of the band’s prior revered bass players, founding member of the band David Hungate, 1977-1982, and Mike Porcaro, 1982 – 2007, who departed the band due to a diagnosis of ALS. While von Schroeck might not look the part of a  “typical” rock and roller, his vocal abilities and strong skills on bass were clearly evident throughout the performance.

Joseph Williams on lead and background vocals, began belting out Toto’s music as a member of the band in 1985 (after the departure of original lead singer Bobby Kimball) and remained with the band until 1988.  Kimball, returning to the band for 1989, departed and rejoined again from 1998 – 2008.  After disbanding for a short period, Toto reformed in 2010 with Joseph Williams on lead vocals. For almost a decade, Williams has continued to showcase his powerfully smooth, rich voice, while trading center stage with the band’s ever present leader, and guitar wizard, Steve Lukather. Lukather’s incredible guitar-playing skills, his passion for performing Toto’s vast catalogue of music (from the hits to the deep cuts) and his devotion to Toto for the past 40 years came shining through as he traveled  across the stage to jam alongside fellow band-mates, and share his vocal abilities.

Rounding out the Toto lineup was Steve Porcaro on keys, Shannon Forrest on drums, Lenny Castro on percussion, and Warren Ham on saxophone and vocals. Steve Porcaro, a founding member of Toto, is the last surviving Porcaro brother (after the deaths of his older brothers, Jeff and Mike), both of whom were Toto members, Mike on bass and Jeff on drums. Porcaro wrote or co-wrote at least one song on each of Toto’s first six albums, with the exception of Isolation. While Porcaro left Toto in 1987 for a more full-time songwriting and composing career, he continued working with Toto in various supporting roles. When the band reformed in 2010, Porcaro rejoined Toto for live performances and has remained with the band for almost a decade. Rocking at his keyboards/synthesizers, wearing a blazer, black rimmed glasses, and his shock of white hair, Porcaro’s appearance had an air of sophistication…not unlike one would expect from a “serious” composer.

The audience at Bergen PAC was obviously filled with longtime Toto fans….singing along and cheering to the band’s hits and less well-known cuts. However, Lukather was aware what song would bring everyone to their feet.  “Is everyone having a great time?” he shouted. “This is a PARTY song. Everyone on your feet! I want to hear you sing!” Cheers erupted from the crowd as the first notes of “Rosanna” began and all audience members rose to their feet.

Sitting on a stool to begin the acoustic portion of the set, Lukather spoke about the nursery rhyme “Georgie Porgy” that was adapted for Toto’s “Georgy Porgy, the first song he ever played with Toto at age 19. Singing with a soft, sweet tone, it was obvious that Lukather could stretch his musical abilities from strong and powerful, to tender, smooth and warm.

Sharing with the audience the origin of the song he had written, “Human Nature,” from Michael Jackson’s bestselling selling album, Thriller, Porcaro told how his daughter had been bullied by a boy at school and asked dad…’Why?’ Porcaro explained, ‘It’s probably because he likes you.’  “Human Nature,” a hit song due in part to the life experiences of one young lady. The song, sung by von Schroeck, was a beautiful rendition of this Michael Jackson classic.

Paying ode to the Beatles, Lukather announced to the crowd, “This next one means a lot to me. This song is for my friend.”  With a voice filled with aching and warmth, and passion emanating from his guitar, Lukather’s love for his friend, George Harrison, was evident as he played, “While My Guitar Gently Weeps.”

As the show was coming near to a close the enthused audience waited for the “big” number of the night. With a broad smile across his face Lukather shouted to the crowd, “Are you ready for THAT SONG?”  With all audience members on their feet, and every voice in the house singing along, the band members all joined in for Toto’s #1 hit song “Africa.” The enthusiasm on stage equaled that in the house. What those on stage knew was something that their fans were unaware of at the time…..this would be one of Toto’s final performances. They were winding down….enjoying the music, the performance, the crowd, and the thrill of Toto. They were enjoying and experiencing the last of their “40 Trips Around the Sun.”  And what an amazing 40 trips it’s been!! 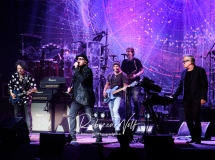 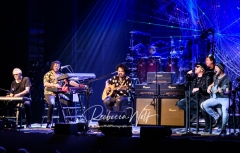 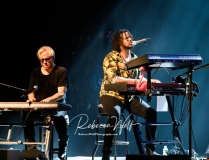 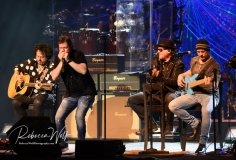 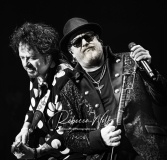 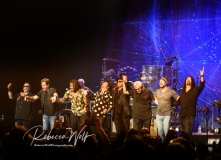 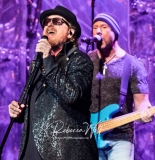 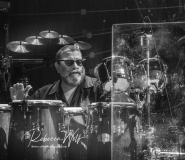