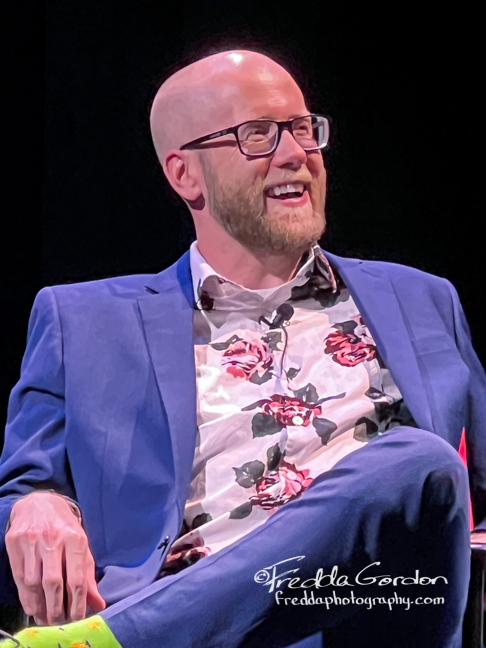 ad his first public appearance since the pandemic and I was lucky to be able to attend. His book, The House in the Cerulean Sea, is at the top of the charts and deserves to be. As was Klune’s intention, it’s full of love and hope and defies any attempt to put it in a specific genre. He said, “This book is for everyone and anyone who wants to believe in hope.” The time spent with Klune, along with a full house at the brand new Sacred Heart Community Space in Fairfield, CT, was as fulfilling as the book. The evening was organized by the Fairfield Public Library as part of the One Book One Town yearly event and was a great way to celebrate community.

Through the night Klune openly shared the path that led to this book and how his life struggles intertwine with all that he does. His messages of love, acceptance, and hope is heard loud and clear through the humorous, wonderful characters he has created. As proven by the cheering for each one of the quirky, lovable children at the end of the evening, the audience confirmed their love and showed that these characters live outside of this book. As further proof, when I first arrived and heard Chauncey mention Fairfield over the loudspeaker, the smile under my mask was big. Although I recognized the voice from the audio book, Klune said that he worked hard to make sure that “If you took every single tag out you would still know who is talking” and his goal was accomplished. Each character is well developed and by the end of the book you feel like you know them well and wish for more time with them. Klune’s message that everyone should be accepted for who they are, not who or what they appear to be, is comforting in this time of social and political divisions. On a personal note he would have loved to have had that message growing up as a queer man (his labeling) with other attributes that may have not been accepted by all. One of those was ADHD and he shared that at that moment he had 30 to 40 things going through his head including books he is writing and something he forgot to do before he left home. He also writes a lot about the seemingly simple act of being kind. This level of caring comes through in everything he says and does. He ended the evening grateful to be able to speak and then reminded everyone to check in with their family and friends during these difficult times. Along with his compassion, Klune’s imagination is wild and wonderful and I look forward to reading more of his books. He explained where the new n The Lives of Puppets got it’s start. He said, “It exists because I bought a Roomba vacuum and put googly eyes on it,” and thought “If you could speak…”. His energy and stories in person are as interesting as his writing. He is vivacious and colorful as accented by his lime green socks with pineapples. I’m pretty sure his sock choice was well thought out by because the first time we meet Arthur Parnassus, Linus notices his red socks, so socks are a thing for Klune.

We also learned a bit about this great author’s process. One tidbit is that he writes while listening to NPR and edits to classic old time Christmas music. Although he did’t say for sure, there was a slight hint that there may be a sequel to The House in the Cerulean Sea. I sure hope so. Turn that radio on!