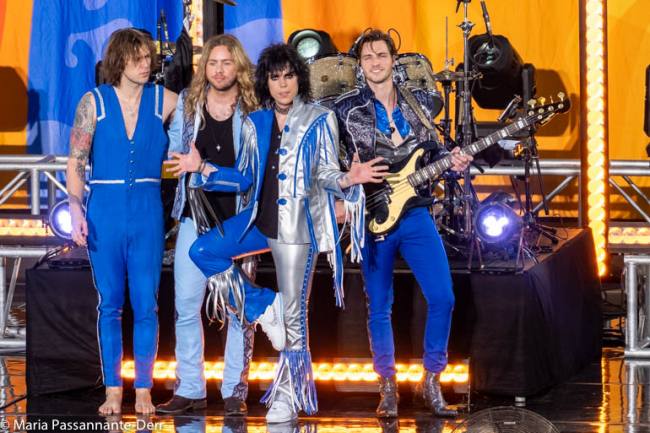 The Struts, the UK band  that recently finished  their “Body Talks Tour” (2018), “burned” up the stage at  Good Morning America’s Summer Concert Series. They performed “Kiss” and “Could Have Been Me” from their 2014 debut album, and “Everyone Wants” and “Body Talks” from their 2018 “Young and Dangerous” album. Luke Spiller, the frontman,  energetically “struts” around the stage from end to end in “Mick Jagger like”  fashion, has been referred to as “the musical child of Freddy Mercury and Mick Jagger”. Clearly, you can see and hear their influence. With their trademark glam/alternative rock sound and their rock star visual spectacle of bright blue and glitter costumes designed by former Queen designer, Zandra Rhodes, The Struts have impressively opened for  Guns and Roses (2016), The Who (2017), The Rolling Stones (2017) and The Foo Fighters (2018). The fans, animated by the engaging persona of Luke Spiller, sang and danced throughout the show. The final song  was their wildly successful version of the David Bowie/Mick Jagger classic, “Dancing in the Street” (non-album single released in 2019).
Members: Luke Spiller, lead vocals; Jed Elliott, bass; Gethin Davies, drums; Adam Slack, guitar. 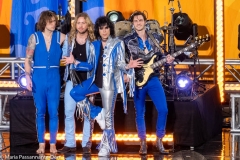 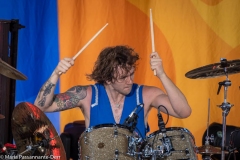 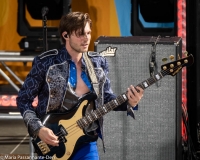 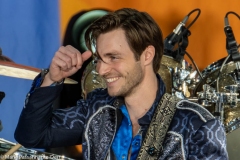 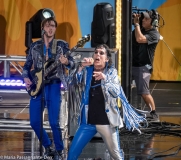 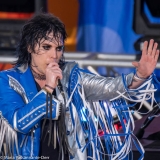