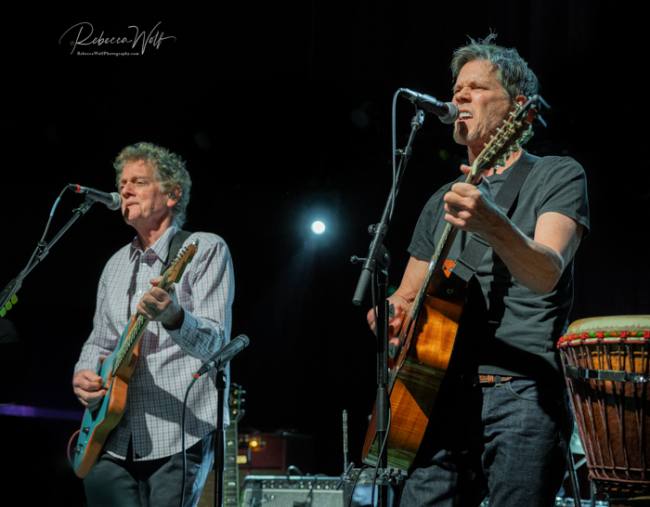 I’m always fascinated by witnessing siblings performing together…. be it musically or in other artistic performances. A sibling connection is like no other.

There’s no one else with whom you’ve shared your youth and unique family dynamics in quite the same manner. Regardless of the quality of a sibling relationship, from highly negative to extremely positive, it’s the uniqueness of the interpersonal experiences that help mold individuals into who they become.

For many siblings, shared childhood interests and abilities result in years spent honing skills on the home front, be it shooting hoops in the driveway, catching passes in the backyard, or performing musical and theatrical productions for captive family members and friends. When siblings develop interests together some may ultimately become competitive and vie for superiority; some may be supportive of one another but remain on separate playing fields; and, some may continue to combine their talents and further develop what they began in their youth. It’s these latter relationships that have the potential to create something very unique, especially in the world of musical collaboration.

Looking back at the sibling dynamics in bands such as The Bee Gees, The Allman Brothers Band, The Jackson 5, and The Carpenters, or at current bands like Jonas Brothers, Haim, Good Charlotte, and Billie Eilish and Finneas, one may view the success of these musicians as due to their familial talents and years of early collaborative development. However, what’s really a major key to the flourishing of these bands is the distinct, extraordinary bond between the siblings that adds depth, authenticity and passion to the music they’ve created. There can be nothing quite like finding success through a joint, cultivated interest and enjoying that moment with the sibling(s) who shared in the creation of the dream.

The Bacon Brothers, comprised of older brother Michael and younger brother Kevin, are surely enjoying what they created and the positive reaction they’ve been received over the past 25 years. The Bacon Brothers began playing music earlier in their lives, having been raised in their Philadelphia home on a combination of classic rock, 70s singer-songwriters, and Philly soul. Both Michael and Kevin pursued their own career paths, Michael as a composer and musician and Kevin in the film industry.  However, their mutual love of American roots music kept the two musically connected and creating, albeit for themselves. However, a one-time performance in 1995 ultimately led to the creation of The Bacon Brothers, and subsequently to the release of their first studio album in 1997.

Over 25 years The Bacon Brothers have continued to release albums and tour nationwide, garnering a legion of fans. Their eleventh release, Erato, an EP due in June, has been described as showcasing big sound and quiet moments, instrumental and electronic textures, and self-written pieces, as well as collaborations. These musicians do not envision themselves as boxed into one genre or format. They consider their music to be a combination of folk, rock, soul, and country. As songwriters, they want to be free to explore whatever sound and feel each song generates, with every new release an opportunity to create something new and explore avenues they’ve not yet ventured.

How apropos for The Bacon Brothers’ show on April 5th to be at The Ardmore Music Hall, on the outskirts of Philadelphia, nicknamed the “City of Brotherly Love.” For brothers raised in Philadelphia, this was a homecoming, with a highly enthused hometown crowd. What better place for two brothers to be showcasing their incredible sibling bond than the “City of Brotherly Love.”

Watching these gentlemen perform, listening to their music, and learning tidbits of family history, it was easy to feel the passion, connection, and genuineness they have towards one another and the authenticity they brought to their songwriting and performing.

The general admission area at The Ardmore Musical Hall was packed well before the band’s entrance onstage. These concert-goers were not casual listeners, but avid Bacon Brothers fans. Philadelphians are known to be loyal; just look at the diehard Eagles fans. So, when hometown guys “make it” and come back for a “visit,” Philadelphians will be there to show “brotherly love.” The crowd erupted in cheers from the moment the band emerged onstage, and their energy and enthusiasm never wavered throughout the over two hour performance. “Is there anybody here over under fifty?” Kevin queried the audience. When cheers erupted in the crowd a bemused Kevin amusingly responded with, “You’re kidding; at a Bacon Brothers’ show?” as the crowd joined in the laugher.  “So, how does it feel to be seeing live music?” questioned Kevin, to continued crowd applause. “We’ve not been out playing at all, for a very long time, for obvious reasons.  It’s very fun to get out and play in front of people. We really do appreciate you being here with us!”

The enthusiasm throughout the venue was equally met by the high spirits on stage. It was difficult for your attention to not be drawn to Kevin Bacon, who exuded positive energy and joy throughout the performance. Kevin appeared to be right where he belongs, on a musical stage, as he danced around, strummed the guitar, beat the congas, and displayed his lead vocal abilities. For those who’ve only had the fortune to see him performing as an award-winning actor, and wondered if an actor can also be an accomplished musical performer, look no further than Kevin Bacon for evidence of this dual ability. This man is an incredibly multitalented artist. While Michael Bacon might not have possessed the outward charisma displayed by his younger brother, this multi-instrumentalist, singer-songwriter, and composer, showcased his range of musical talents throughout the night’s performance. Playing guitar, ukulele, cello, and autoharp, and taking turns on lead vocals, there was no doubt that Michael Bacon is a foundational and creative force supporting the band.

The band opened the night with “Let Me Happen,” from the forthcoming Erato. Additional numbers from the new EP included the title track, as well as “In Memory (Of When I Cared),” cowritten with songwriting legend Desmond Child, and “Dark Chocolate.” “Anybody enjoy pasta? Anybody enjoy dark chocolate?” Kevin shouted to the “Yays,” in the crowd. “This is the song for you!” Sharing with the crowd about the creation of Erato, Kevin noted, “I wrote one song during lockdown and then got stuck real quick.” That’s when he explained, they summoned Erato, the Greek Muse of romantic poetry for some inspiration.

Throughout the evening’s set The Bacon Brothers played songs from a range of their albums, including “She-Zee-Zee,” “Play!” and “Picker” from the 2020’s The Way We Were.  “My brother likes to make my childhood into fodder for his songs,” Michael amusingly stated. “I don’t know how he knew about this because he’s nine years younger but he wrote this song “Picker” because I liked to go to all these pawn shops.” The smirk on Kevin’s face was the  perfect sign of what you do to a sibling…tease. “36 Cents,” the title song from the band’s 2014 album, was written and sung by Michael Bacon for his wife Betsy, “who’s put up with me for fifty years now!” “Tom Petty T-Shirt,” a crowd favorite from the band’s self-titled 2018 album, was sung by Kevin Bacon, with the sentimentality reserved for a song about the ending of a relationship.

While The Bacon Brothers are the heart and soul of the band, their sound and onstage performance wouldn’t have been possible without supporting musicians, Paul Guzzone (bass/backing vocals) and Frank Vilardi (drums), both since 1995, and Tim Quick (lead guitar/mandolin/back vocals) since 2018.

Having watched The Bacon Brothers over the course of the evening, I remain throughly fascinated by the connection of siblings who perform together, celebrating during triumphs and supporting each other during challenges. Together pursuing a shared goal and owning a shared past….how special and unique is that! 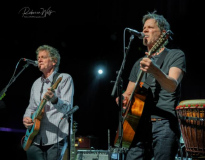 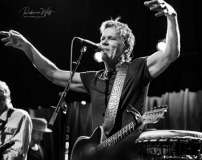 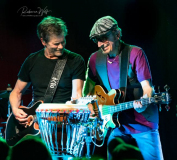 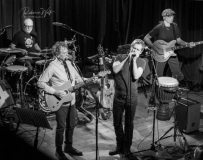 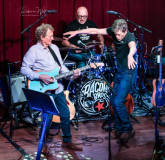 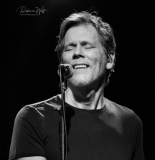