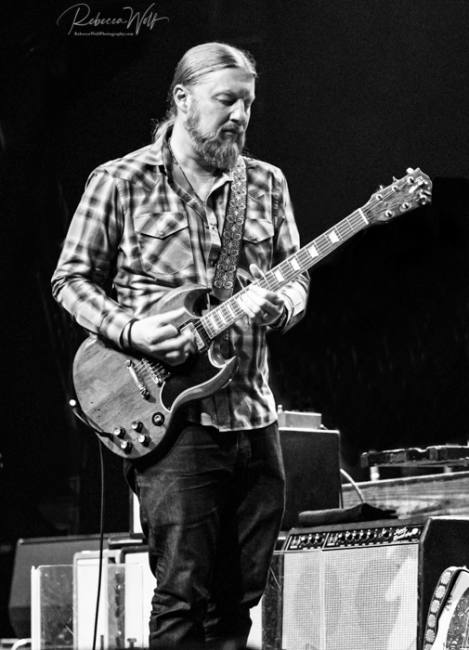 Count Basie Center for the Arts

What do you get when you pair a guitar prodigy, who happens to be a phenomenal songwriter, with an equally talent songwriter, who happens to be a tremendously gifted blues singer? Before answering that question, add a 10-piece band that includes three harmony vocalists with voices of lead singers, a three-piece horn section with a highly-respected and recorded trombonist, an acclaimed jazz trumpeter, and a Grammy award-winning tenor saxophonist, a rhythm section with a double dose of amazingly energetic, passionate percussion skills, a life-long, jazz-trained bass player and a noted keyboardist. Now, what you get is an incredible blues rock group. You get the Tedeschi Trucks Band.

The Tedeschi Trucks Band is no “ordinary” blues rock band. They are “extra-ordinary” in large part due to the combined talents of these 12 super musicians; you know the saying, the whole is greater than the sum of its parts. However, the band began with a leg up towards extraordinary due to the foundation set by the prodigious guitar skills of Derek Trucks and the beautifully powerful, gritty vocals of Susan Tedeschi. When these two musicians joined forces in 2010 to create the Tedeschi Trucks Band, it was the beginning of a blues rock group like no other. In this youth-driven, pop culture era of millennials and Gen Zs, where new bands are few and far between, and rock music has felt like a dying breed, this band has amassed a tremendous following and earned considerable accolades.

Both Susan Tedeschi and Derek Trucks are veteran musicians, who’ve been invested in their artistry since their youth. Tedeschi began performing in musical theater, singing in church, and joined a band from the start of her teenage years. By the time she was 18 she’d formed her own band. Trucks, nephew of famed Allman Brothers Band drummer, Butch Trucks, had played alongside Buddy Guy by 13 years old, formed his own band by 15, by 20 had played with the likes of Bob Dylan, Phil Lesh and the Allman Brothers, becoming an official member of the Allman Brothers Band at 20 years old. That year, 1999,Trucks had the good fortune to meet Tedeschi, who was opening for the Allman Brothers in New Orleans. Two years later, Trucks and Tedeschi were married. Over the next 9 years, Tedeschi and Trucks continued to play with their individual bands, often touring together. In 2010, they joined forces to become the Tedeschi Trucks Band. Four studio albums, and three live albums later, this band has continued to focus on writing and performing original material that draws sold-out crowds to their shows across the US.

I was fortunate enough to be at one of these shows on March 19th at the Count Basie Center for the Arts in Red Bank, NJ. The Tedeschi Trucks Band was in such demand they played for three nights at the Count Basie. On this Saturday evening, the theater was bursting (physically and with excitement) as the audience awaited the band’s arrival. Time ticked away as the 7:30 start time passed and the house lights remained lit. The additional wait time only increased the eagerness in the crowd as everyone was abuzz. The fact that this may have been the first concert for many since pandemic restrictions were lifted may have added to the excitement in the air.  As the lights suddenly dimmed, figures appeared on the darkened stage. The volume in the room briefly plummeted before exploding into applause and cheers, as the stage lights rose and the band members stood colorfully aglow. With the audience on their feet the band opened the night’s performance with the upbeat “Let Me Get By,” the title track from the band’s 2016 album.

There is no doubt that Tedeschi Trucks has ardent fans. From the evening’s first musical note audience members of all ages were on their feet, dancing, singing and fixating on the band the for the better part of the 2 1/2 hour show. This was no surprise, as the music emanating from these 12 artists was so engaging and rich, with the mixture of instrumental tones and harmonizing of voices, that the resulting sound enveloped the room and mesmerized the crowd. The two-set performance included Tedeschi Truck Band originals, as well as covers of a number of legendary blues and rock artists. Each song chosen gave an opportunity for members of the band to display their incredible talents.

During the cover of “Derek and the Dominos “Why Does Love Got to Be So Sad?” saxophonist Kebbi Williams, performed an incredible, spirited solo. Williams again demonstrated his expertise on the sax during, “Part of Me,” from the band’s 2013 album, Made Up Mind. This number had the crowd clapping along, as Williams jammed and danced along with his saxophone partner, while never missing a note. The title track from Made up Mind was an extraordinary showcase of musicianship, from the beginning of the number, with Tedeschi’s powerful, gritty voice, to Truck’s fantastical guitar jams, to Gabe Dixon’s fingers passionately flying from one keyboard to the next. However, no one can deny that while every aspect of the song was eye-catching and ear-grabbing, it was Mark Rivers’ gospel-like solo performance that took the song to the next level. Later in the evening, Rivers again demonstrated his incredible vocal prowess during a beautiful bluesy rendition of James Taylor’s “Fire and Rain.”

With talent in this band at a premium, vocalist Mike Mattison’s incredible range and power was not unexpected. However, it was still amazing to listen to his passion and depth, and the rasp in his voice, as he performed renowned blues musician Bessie Smith’s “Gin House Blues” and Taj Mahal’s “Everybody’s Got to Change Sometime”.  This display of premium skill and talent continued during Tedeschi Trucks’ “Idle Wind,” from Made Up Mind. It was a perfect vehicle for Dixon to again showcase his abilities on the keys, as well as the opportune time for the spotlight to focus on the band’s pair of drummers, Tyler Greenwell and newcomer Isaac Eady. With wo drummers fiercely playing their drum kits in unison, an abundance of rhythm permeated the stage and created a phenomenal cacophony of sound.

The music of Tedeschi Trucks consistently had a feel of improvisation, as their songs often stretched into long instrumental jams. When Trucks played his signature extended slide guitar solos it was impossible not to remain fixated and in awe, as his hands flew along the neck of the guitar.  During these jams the audience was additionally enthralled by solos from the brass members of the band, trombonist Elizabeth Lea and trumpeter Ephraim Owens. With such a range of musical instruments the overall sound emanating throughout the venue felt multi-textured and dynamic.

“Bound for Glory,” from the band’s debut 2011 debut album Revelator, brought the evening of incredible blues rock to a close. This was not a simple close but a glorious anthem-like fanfare, highlighting Dixon on keys, showcasing Alecia Chakour’s breathtaking vocal abilities, and resulting in the entire audience’s  enthusiastic clapping along until the very end. While this was the band’s third night in a row at the Count Basie, there was never a point when the musical energy on stage did not equal the enthusiasm in the crowd. So, what do you get when you pair a guitar prodigy and a superb talented blues singer, mix in some great songwriting and add 10 incredible musical artists? You guessed it….the one and only Tedeschi Trucks Band! 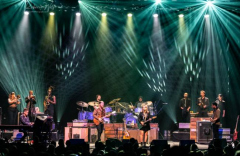 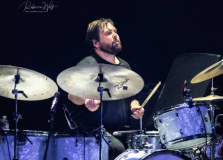 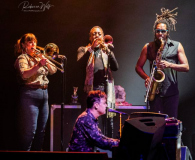 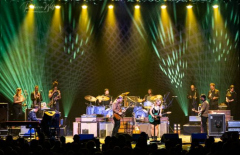 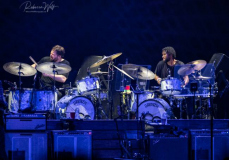