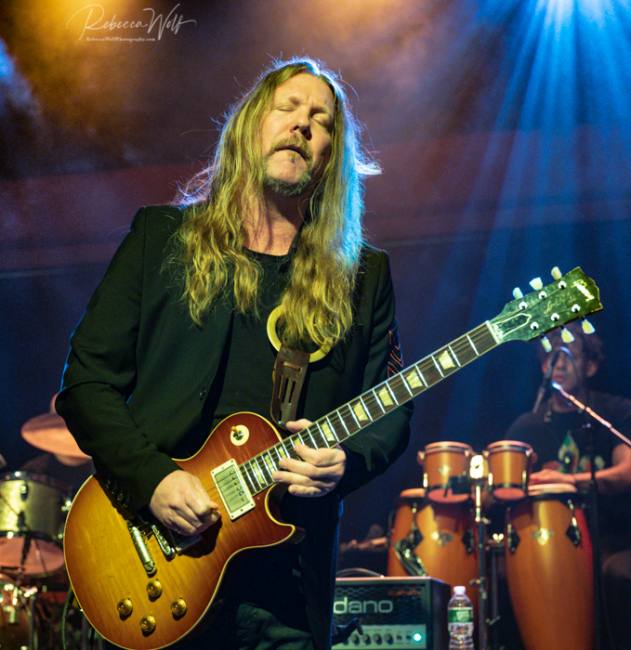 In was late January when a sudden announcement on social media left fans of the Allman Betts Band confused and in a bit of a tizzy. The announcement stated that the band was going on a hiatus (until the Allman Family Revival shows in December) and previously scheduled shows would instead be performed by the  Devon Allman Project. The emotions online (particularly Facebook) ran high, as the devoted fan base, many of whom were/are devout Allman Brothers Band fans, feared this to be a repeat of the dissolution of the first generation band.  The question on everyone’s mind was, and remains, “Are we really ever going to see the Allman Betts Band together again?”

In the time since the announcement the heightened emotions have died down and fans have seemingly come to an acceptance that for now we are not getting further answers. However, as each band member continues on his own musical path (some recording new music, others touring), we are lucky enough to continue to be able to experience the incredible individual talents each has to share. Unlike the Allman Brothers who became a band when they were very young and at the onset of their careers, the gentlemen in the Allman Betts Band were considerably older when they formed Allman Betts and already had their individual careers. It’s not surprising that possibility a need for independence and self expression came harkening back.

For fans of the Allman Betts Band, who are hopefully fans of each individual band member, this is an opportune time to get out there and support what each musician has to offer. That is what I did on March 16th at Musikfest Cafe in Bethlehem, PA, a night promised to be jam packed with music. The Devon Allman Project, with its typically Southern rock vibe, is touring with award-winning blues/roots rocker Samantha Fish, as well as with an opening act appearance from the folk due, River Kittens. While each of these bands has a distinctly different sound and feel, there’s a sense that they share a connection through their musical roots.

The River Kittens, who’s EP Soaking Wet was released in 2021 on Devon Allman’s label, Create Records, add a dash of sass to their folky Americana sound. Mattie Schell and Allie Vogler, hailing from St. Louis, presented with a warm, down-home spirit that was immediately engaging. However, there’s no mistaking these women for timid mid-Western girls. Their lyrics, cheeky grins, and jesting with the crowd were quick signs that these women have spunk.  It was impossible not to smile while listening to the blending of their voices, which perfectly intertwined with the twangs from Mattie’s mandolin and the strums from Allie’s guitar. Whether it was songs like, “Trouble,” and “Dressing on the Side,” with relatable, fun lyrics or covers, of Springsteen’s “Atlantic City” or Small Faces’ “Ooh La La,” these women had the crowd at the Musikfest Cafe enthralled. I am eagerly awaiting the release of their new music this week.

As the general admission area suddenly increased in headcount, it became apparent that those awaiting the arrival of Samantha Fish knew the amazing performance they were about to experience. Entering the stage to tremendous applause, Samantha Fish looked to be the quintessential cool “rocker chick,” with black leather pants, a black leather jacket adorned with silver hoops, and sparkling silver boots. Fish is a reminder of the earlier generation of female rockers, the likes of Pat Benatar and Chrissie Hynde, who are powerful and irreverent, and have continued to blow audiences away with their bravado and musical prowess.  Fish did just that, as well, as she opened her set with “Bulletproof,” from Kill or Be Kind, with her fierce bluesy rock and roll sound, her phenomenal guitar skills, and her command of the stage.

“How you feeling out there, Bethlehem?! It’s so, so good to be back here! We got some new stuff for you, too….from the new album,” Fish announced to audience cheers, as she began playing “Loud,” from the album Faster, released in September 2021. While the number began with the feel of a soulful ballad, it transitioned to an energetic blues-filled rock number. Additional songs from Faster, included “Twisted Ambition,” with fiery guitar riffs and “Better Be Lonely.”  “Kill or Be Kind,” the title track from the 2019 album was sultry and powerful, while “Hello Stranger,” a cover of Barbara Lewis’ 1963 number, from Fish’s Chill’s and Fever, had a smooth, alluring tone. Fish invited the River Kittens back on stage to sing “Dream Girl,” before ending the set with the title song from her 2013 album, “Black Wind Howlin’.”  The song began with smooth blues feel before Fish broke into a powerful rock and roll vibe, with fierce guitar jamming and frenetic hair flipping.

The different energy and sound of each song served as a perfect testament to Fish’s ability to create and play music along a wide spectrum. Throughout the performance Fish remained totally in her zone; she was so engaging to watch you didn’t want to take your eyes away.  Fish’s band includes, Sarah Tomek, who Fish described as “beating the holy hell out of the drums,” as well as bass player Ron Johnson and keyboardist Matt Wade (who also played for the Devon Allman Project), all of whom added passion, power and musical expertise to Fish’s incredible artistry.

The Devon Allman Project, originally created by Allman in 2017, has returned for a limited tour and has brought different guest musicians on stage each week. That so many artists want to join Allman and his band on stage is a testament to the level of respect for Allman and his musicianship. This week the guests included the legendary singer and harmonica player Jimmy Hall, from the band Wet Willie, and the incredible blues guitarist and singer, Larry McCray.

Allman has an abundance of personality and spirit on stage….the ultimate showman. From the passionate expressions on his face, to his intensely spirited guitar playing, no one could ever say Allman doesn’t completely invest himself in his music and in performing for the audience. Having a general admission area at Musikfest Cafe, with an extraordinarily enthused crowd packing the floor to the front of the stage, increased the already high spirits of the musicians. It would seem nearly impossible for the band to not amp up their energy level to match the abundant enthusiasm emanating from the fans, as they sang along, cheered, raised arms in the air and danced throughout the eleven song set (including two encore numbers.)

Everyone on stage remained in the groove and there was a smooth transition from one song to the next.  During “Fired Up!” Allman, guitar player Jackson Stokes (who’s played with and frequently opened for the Allman Betts Band), and bass player Justin Corgan, were indeed fired up as they jammed on their guitars and took command of the stage. Drummer, John Lum (Allman Betts drummer) and percussionist/sax player David Gomez held down the back end of the stage with their fast playing, rhythmic percussion beats. During the song “Sahara” Gomez transitioned from congas to performing an incredible extended saxophone solo.  When Larry McCray and Jimmy Hall joined the band they raised the already high spirts on the stage and in the crowd. During the blues number, “Sweet Home Chicago,” popularized by The Blues Brothers, the audience members were enthralled by McCray’s power and passion on the guitar that made the strings of his red Gibson Flying V sing.

Jimmy Hall followed suit on the spirited, upbeat blues number, “Trouble No More,” written by Muddy Waters. Hall’s voice remains strong and clear and belies a man who began his career in the music industry more than 50 years ago. His harmonica playing was equally, if not more impressive, as there are few musicians still playing this tiny instrument and making such a melodic sound. Additional songs in the evening’s set included, the Allman Betts Band’s “Down to the River” and “Southern Rain,” where Allman was able to showcase his full, rich vocal abilities. The band ended the set with The Allman Brothers “Dreams,” before bringing the night’s entire cast of musicians back onstage for Fleetwood Mac’s “Dreams.”

From the first recognizable notes of this beloved classic rock number a hush came over the room. It was impossible to not be completely mesmerized as Samantha Fish began smoothly and eloquently singing, “Now hear you go again, you want your freedom.” As they reached the refrain, Allman, Hall and the River Kittens joined in, adding a beautiful layering of voices, before the River Kittens took lead singing the following verse with their sweet, folk tones.  An extended instrumental ending allowed moments for Schell to showcase her mandolin playing, McCray to display his blues guitar expertise, and Hall to add a touches with his melodic harmonica. The evening could’ve ended on the last note of this beautiful rendition of “Dreams.” However, wanting the night to finish in an upbeat state, the band played an energetic, high-spirited, up-on-your-feet performance of Wet Willie’s “Keep on Smilin’,” with Jimmy Hall leading the charge. Hall’s joy was infectious as he took command of stage and encouraged the audience to participate in responsive singing, while the music played on for close to 10 minutes.

What a night of incredible music! The artists Devon Allman has congregated for this tour of the Devon Allman Project, with Samantha Fish, are unbelievable musicians, and bring an abundance of energy and spirit to the stage. While this tour may have not been what was originally planned, sometimes the best things are unplanned! 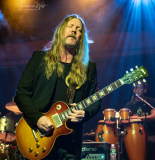 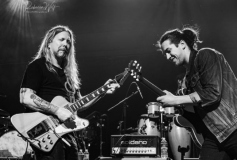 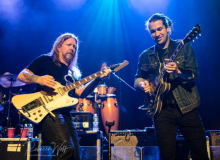 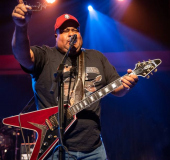 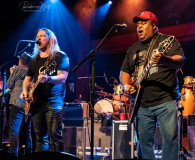 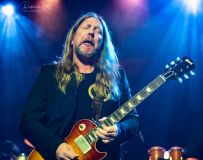 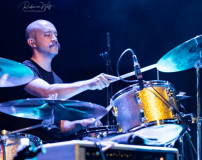 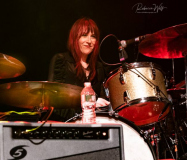 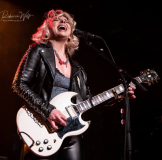