As multiple decades have passed since the heydayof 70s and 80s musical artists, you might think the majority would slip away into blissful retirement. However, that thought would be incorrect as many musicians, regardless of their age, remain passionate about creating new music and continuing to perform. Likewise, many fans have maintained an interest in these bands, whether they are performing their new work, showcasing their classic hits, or both. Those who grew up in the 70s and 80s often remained attached to these musicians and their music as it connect them to pivotal times in their lives. There’s a  feeling of nostalgic for the past, and one’s youth, as well as nostalgia for music created and performed with instruments, rather than computers. Many 70s and 80s artists still on the road today have found success by creating a multi-artist bill, with overlapping fans bringing larger crowds to larger arenas. One of the most thrilling aspects of attending performances of these artists is being surrounded by the passion emanating from these decades-long fans.

This enthusiasm and passion was on full display at PNC Bank Art Center on August 20th for a musical bill that included Styx and REO Speedwagon, with an opening by Loverboy. If you’re looking for nostalgia and bands with hits from the 70s and 80s, look no further than these artists. Styx, who’s celebrating their 50th anniversary this year, released four consecutive albums between 1977 and 1981 that were certified Multi-Platinum. By 1984, they’d earned seven Top 10 Billboard Hot 100 hits, and followed with a #3 Billboard Hot 100 hit in 1990. Since the new millennium Styx has released four studio albums, including2017’s The Mission, and in June 2021 released their 17th studio album, Crash of the Crown. REO Speedwagon’s musical history includes thirteen Top 40 hits. Hi Infidelity (1980) is the band’s best-selling album containing four of the Top 40 US hits. REO Speedwagon has continued to tour regularly over the past several decades, frequently with Styx, as well as Chicago, Don Felder and Def Leppard. Loverboy achieved commercial success with their 1981 album, Get Lucky, which reached #7 on the Billboard album charts, followed by 1983’s Keep It Up. They have released nine studio albums and in the past decade have released several singles, including 2022’s new single “Release.”

The PNC Bank Art Center seats, as well as the lawn, were filled to the brim with fans ready for an incredible 4-hour trip down memory lane, and none of the three bands disappointed. There was excitement in the crowd from the moment Loverboy hit the stage and began rocking the night with “Notorious.” The 45-minute set included “Lucky Ones,” “The Kid is Hot Tonite” and “Turn Me Loose,” ending with the hit “Working For the Weekend,” which revved the crowd into full gear. REO Speedwagon brought further excitement, opening with “Don’t Let Him Go,” followed by fan favorite and crowd participation number, “Take It On The Run.” Lead singer/guitar player Kevin Cronin was full of energy, as he hopped, skipped and criss-crossed the stage and joined forces to jam with Bruce Hall on bass and Dave Amato on lead guitar. The lightning bolt on drummer Bryan Hitt’s shirt matched his fierce energy and personalty on the drum kit, while Neal Doughty, wearing his signature hat, added the beautiful keyboard melodies that he has for every REO Speedwagon album.  Additional songs in the REO set included, “That Ain’t Love,” “Tough Guys,” and “Time For Me to Fly.” Of course no REO Speedwagon performance would be complete without “Can’t Fight This Feeling” and “Keep On Lovin’ You.”  It was no surprise during these songs to hear thousands of voices passionately singing along.

The crowd’s passion easily flowed from REO Speedwagon to Styx, as band members emerged with a fanfare of stage lights to begin the set with Crash of the Crown’s “The Fight Of Our Lives.” The exuberance emanating from the musicians matched that of the crowd and remained heightened throughout the performance. Lawrence Gowan on lead vocals and keyboards was nothing other than a wonder to watch, as he leapt, raced around the keyboard, and played keys behind his back. The incredible Tommy Shaw displayed lead guitar skills with his signature flair, as well as vocal abilities that defied the passage of time, as he jammed with fellow lead guitarist James “JY” Young. Bassist Ricky Phillips, guitarist Will Evankovich, and drummer Todd Sucherman increased the energy level on stage with their passionate rock and roll energy, and founding band member Chuck Panozzo (who joined for several numbers) added a spark of history and sentimentality.

The band performed classic hits, “Blue Color Man,” “Grand Illusion,” “Too Much Time on My Hands,” and “Fooling Yourself,” as well as newer numbers, “Crash Of The Crown,”  “Sound The Alarm” and “Khedive.”  While a chorus of thousands could be heard for every classic Styx number, the moment the band began the first notes of the beloved “Come Sail Away,” every voice in the arena began to sing in unison, while cellphone lights illuminated the darkened night air. The moment felt powerfully special. This incredible 45 year old song continues to bring back a multitude of memories and feelings for all and created a shared connection between the band and their fans, as well as audience members with each another. That’s what music from the 70s and 80s still does for many of us. It allows us to travel back in time, to close our eyes and get happily lost for a moment. How lucky we are to still have these wonderful musicians sharing their music and taking us these magical  journeys. 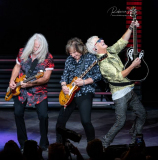 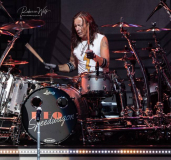 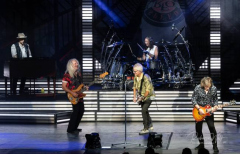 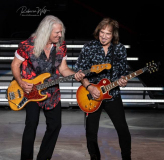 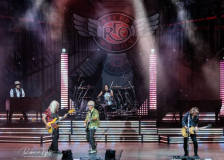 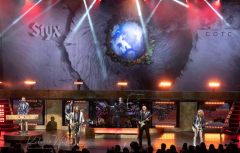 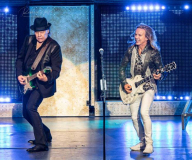