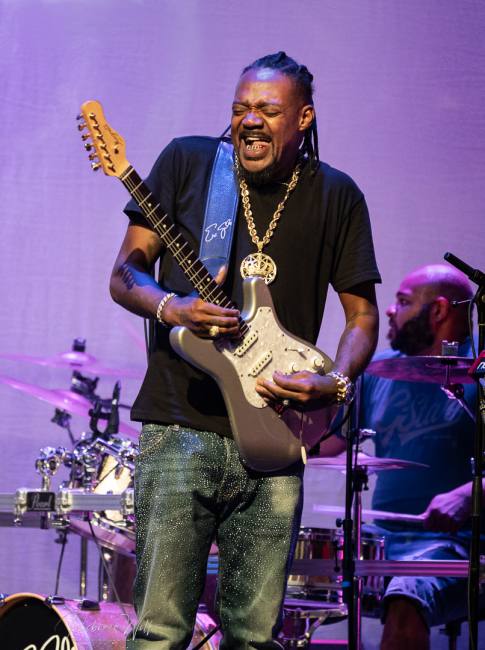 While the name Eric Gales may not be a household name, those in the music industry, or anyone who’s heard Gales play, knows this is a guitar virtuoso who warrants his name and incredible skills to be known far and wide. Beyond his artistry on the guitar, Gales is a fabulous songwriter, performer and singer, who began his guitar journey as an elementary school student. Releasing his first album in 1991 with The Eric Gales Band, and his second in 1993, Gales began his career with two rock hits on Mainstream Rock radio, “Sign of the Storm” and “Paralyzed.” Over the past 30 years, Gales has performed and toured with a multitude of artists, and has released 19 studio albums. In 2017 and 2019 he was awarded the Blues Music Award for Blues Rock Artist of the Year. January 2022 brought the release of Gales’ newest album, Crown, with lead single “I Want My Crown” featuring Joe Bonamassa. Upon the album’s release it debuted at No.1 on the Billboard Blues Album chart.

On August 18th I had the privilege of seeing Gales perform at The Newton Theatre, in Newton, NJ. While the crowd that evening was small, they were mighty, mighty lovers of Eric Gales, and Gales most certainly treated his fans to an incredible performance. From the moment Gales hit the stage he was enthusiastic, high-spirited, and engaging. It was impossible to take your eyes away from Gales as his personality radiated as brightly as his large gold necklace and sparkling pants.

It was immediately obvious that Gales loves to perform and to share this experience and knowledge with the audience. After opening the set with a showcase of his jamming guitar skills Gales shared, “On the way over here I informed the band we were going to change things up tonight. It was just a 5 minute ride, so there wasn’t much time but I decided that’s what we were doing. So, that’s what you are getting tonight,” he said with a cheeky grin and a touch of excitement, to which he received cheers from the crowd. “You are going to be treated to a buffet of music….a buffet. Now, that first number was definitely blues, right? The second number…that was rock, right? With some R&B and some pop….and some blues added in.” As I listened to Gales impart this information, I was enthralled, as was the audience, with receiving this music appreciation lesson from none other than Eric Gales. “Thank you for paying for us to have band practice this evening,” Gales continued with a big laugh. “This is actually how hard we practice.” There’s no question all audience members felt this “practice session” was well worth the fee, as Gales and his four band members were completely on-point the entire evening, including Gales’ wife, LaDonna Gales, on percussion and vocals, and Smoke Face bass (wearing a slasher mask, and partially shrouded in smoke.)

Throughout the evening, no matter what song Gales played, whether it was an extended guitar jam or a song from his new album Crown, including “I Want My Crown,” “The Storm,” “My Own Best Friend,” or “Take Me Just as I Am” (with LaDonna beautifully singing lead vocals), Gales played passionate, rocking blues guitar with his entire mind, body and soul. “It’s not about you liking the music,” Gales shared with the crowd, “It’s about you feeling it. That’s what this is about!”  The blues has always been music that comes from the soul, from deep within, and Gales put his soul on the stage. If his fingers moving at lightening speed along the neck of the guitar weren’t enough of a sign, one just had to take a look at the expressions on Gales’ face to know that he was completely in the music and in the moment.

During the hour and a half set, the audience at The Newton Theatre remained fully engaged and enthralled. It was impossible not to glean energy from Gales. With his effusive and endearing enthusiasm, Gales repeatedly motioned to the crowd to increase their volume, to cheer, and to embody his spirit. The crowd took up this challenge and managed to sound like an audience twice their size. It’s wasn’t surprising that a line quickly formed at the end of the show to meet this incredibly talented, positive, enthusiastic performer.  Eric Gales’ new album “Crown” has this title for a reason. After so many years in the music business, and with such virtuoso guitar skills, it’s time for Gales to wear his much deserved crown. Eric Gales might not be a household name, but he should be! 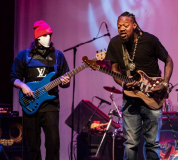 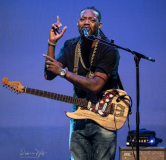