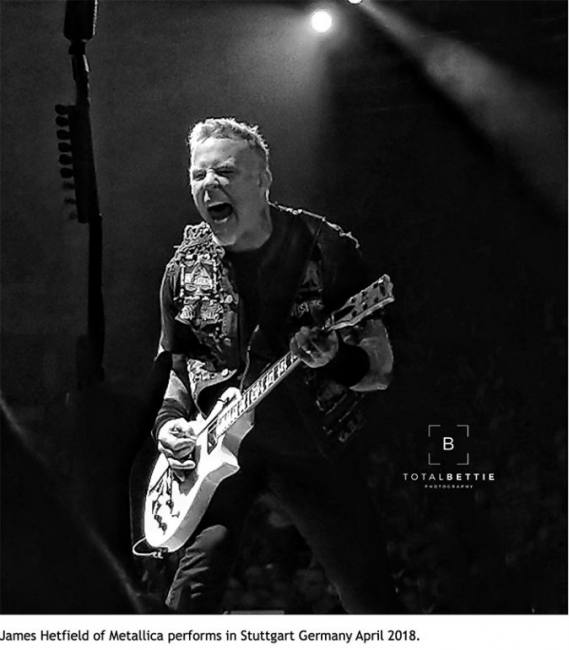 Metallica played a two-night stint at Hanns Martin Schleyer Halle on April 7 and 9th in Stuttgart Germany and I was fortunate enough to be a part of the sold-out crowd. I have seen the band several times before but in much larger venues – usually outdoors and with over 80,000 other fans. The Schleyer-Halle was downright intimate by comparison; the capacity maxed out at just under 15,000. The excitement had been building for some time as I was staying in Berlin and made the special 8-hour journey by overnight rail to Stuttgart to catch this performance. The hotel that I stayed at was in the same building complex as the arena and when I arrived early in the day, fans from all over Europe were already celebrating at the sports bar within where the beer flowed and Metallica blasted over the loudspeakers.

Scoring tickets to this show was a miracle each was assigned by name and guards checked every stub for ID before allowing entrance. Even with this added security measure getting into the arena was relatively smooth and fans complied happily.  And for good reason, the band was absolutely on fire! Though their usual light/video/pyro was understandably scaled back a bit to accommodate the smaller indoor location it didn’t disappoint. They played many of their classics including Fade to Black, Seek & Destroy, and Master of Puppets. The show also included a duet by Kirk Hammett and Rob Trujillo performing a popular German song “Marmor, Stein und Eisen Bricht.” Naturally the crowd went wild.

It was somewhat surreal to see them in such a different setting. And really cool to hear the German fans singing and chanting along in perfect English!  Hands down one of the best concert memories of my life.

Photos and Review by Kimberly Palumbo