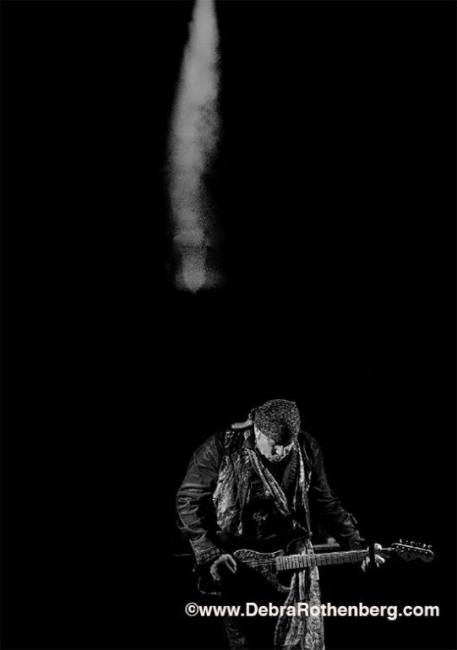 Staten Island On a beautiful Wednesday evening on the stage of the historic and magnificently restored St. George Theatre in Staten Island, New York, 90-year-old Bea Slater stepped on stage to introduce Little Steven (Van Zandt) and the Disciples of Soul as “the swingin’-est, ginchiest, rockin’-est, awesomest super-rad band in the land.” Slater’s opinion was soon validated.

As the curtain rose with lights flashing and siren sounds blaring, musical director Marc Ribler led the mighty Disciples on a run of power songs.
Not to be outdone by his “Boss” Springsteen, Van Zandt is irresistibly cool although competing, at times, with his three wildly talented backup singers for attention. Treated to solos by every musician in the group, the audience responded with spontaneous delight. The horn section, led by original Disciple Eddie “Kingfish” Manion rounds out the powerful sound of this band. So many of Little Steven’s songs that were written over 25 years ago have as much meaning today with what is going on in the world as they did when he wrote and first performed them.
The sound in the St. George Theatre is second to none. It is comfortable, the staff is courteous and helpful. This is definitely a must see show if it comes to your town. “Sweet Soul Music”
“Soul Fire”
“Coming Back”
“The Blues Is My Business”
“Love on the Wrong Side of Town”
“Until the Good Is Gone”
“Angel Eyes”
“I Saw the Light”
“Standing in the Line of Fire”
“Saint Valentine’s Day”
“Salvation”
“The City Weeps Tonight:
“Down and Out in New York City”
“Princess of Little Italy”
“Solidarity”
“Leonard Peltier”
“I Am a Patriot”
“Groovin’ Is Easy”
“Ride the Night Away”
“Bitter Fruit”
“Forever”