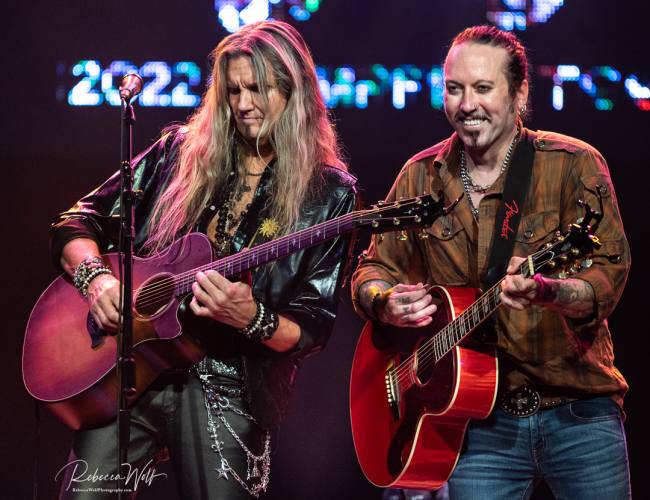 The Landis Theater in Vineland, NJ had an intimate crowd on September 23rd for the Joel Hoekstra and Brandon Gibbs 2022 Campfire Tour. The intimacy perfectly fit the evening’s personal, storytelling theme…..sharing stories and songs as friends would around a beautiful fall campfire. Whether the songs are energetic and joyful, or heartfelt and contemplative, an acoustic show (especially those with solely one or two guitarists), brings with it a level of intimacy. Without the fanfare of a high energy, multi instrumental band, it is the sound of the reverberating guitar strings, the clarity and beauty of the vocals, and the artists’ personal connection to the music that comes to the forefront and builds a bond between musicians and an audience. This was the vibe throughout The Landis Theater for Hoekstra’s and Gibb’s Campfire Tour.

Both Hoekstra and Gibbs are well-seasoned musicians, songwriters, and singers, who’ve performed individually, as well as with of a range of artists and bands. As a guitar player for Trans Siberian Orchestra, Whitesnake and Cher, Hoekstra consistently presents as the consummate rocker, with his rockstar appearance (complete with long blonde hair, black leather attire and silver chains), his energetic spirit, and his intensely powerful guitar skills. Even an acoustic show couldn’t diminish Hoekstra’s rock and roll persona and performance.

Brandon Gibbs is likewise a rocker, who writes and performs rock music, as well as pop, blues and country. Having formed the band Devil City Angels in 2014, the band released their self-titled album in 2015. Over the past few years, Gibbs has continued to write, record and perform acoustically and with his own band. In 2022, Gibbs released two singles, “First Friend” and “Rich for Life.” At the Campfire Tour, Gibbs presented his musical passion very differently than Hoekstra. Gibbs is a passionate storyteller, and verbal communicator, who writes and sings from his soul. Throughout the performance he frequently shared personal stories behind his self-penned tunes, and painted vivid pictures with both his spoken words, and his lyrics. Gibbs appeared intimately connected to his thoughts and feelings and wanted his music to be that touchstone for others as well.

The evening’s acoustic mix included originals from each artist’s catalog, as well as a number of fan-favorite covers. There was an easy, comfortable flow between Hoekstra and Gibbs, whether trading lead vocals, lead guitar, or playing in unison. The evening’s set opened with “No Angels” and “Boneyard,” from Gibbs’ band Devil City Angels, followed by Poison’s “Every Rose Has Its Thorn.”  Additional Gibbs songs included, “This Town,”“First Friend,” and “The Hero,” the last number beautifully written in honor of Gibbs’ twin, a dedicated and heroic police officer. Hoekstra numbers included, “Hard to Say Goodbye” and “Until I Left You,” from Joel Hoekstra’s 13, the latter song written in reference to leaving alcohol behind, as explained by Hoekstra. The duo performed Whitesnake hits, “Is This Love” and “Here I Go Again,” as well as rock classics, “Stuck in the Middle With You” and “Love Me Two Times,” with Hoekstra singing the beloved song by The Doors with incredible, growling, powerful rock vocals, that brought down the house.

An acoustic performance is an opportunity to truly put a spotlight on an artist’s talents and skills. It’s a chance to peel away the big lights, sounds, and stage performance and to hear the simple sounds of a guitar, along with pure untouched vocals. Hoekstra’s and Gibb’s intimate evening of storytelling and song sharing provided that incredible musical experience. If only all campfires were this great! 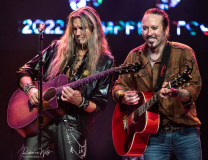 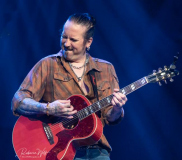 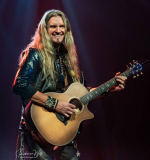 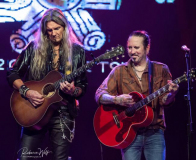 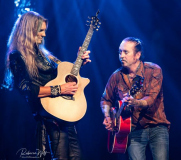 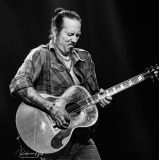 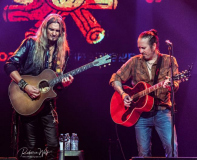 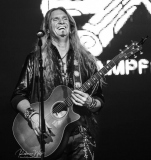 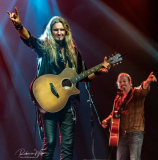