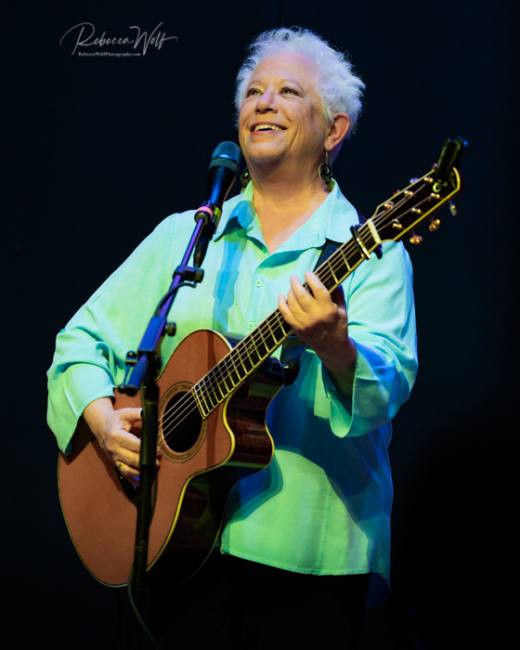 The phrase “touched my heart” is often said casually, to describe a sweet gesture or a moment. However, there are situations where you actually experience something at such a deep level that you feel as if your heart has been touched. This was the feeling I came away with from Janis Ian’s performance on May 1st at The Newton Theatre. This feeling was not related to being a long-time fan and finally having the opportunity to see that beloved artist perform. Admittedly, prior to May 1st the only song I knew (and loved) of Janis Ian was her hit single “At Seventeen.” However, I did not need to have any further familiarity with Janis Ian’s music to come away from that evening touched by her performance.

Being a fan of folk music, particularly 70s folk, it’s not surprising that I’d enjoy Ian’s live musical performance. There was something more to it though, than the artistry of her music. From the moment Ian entered the stage, with a warm, kind smile across her face, there was a calm, centered aura surrounding her. While the crowd’s cheers were thunderous (as they were throughout the evening) once the applause quieted, the feeling of peacefulness that Ian brought to the stage blanketed the audience. All in attendance sat blissfully engaged as Ian opened the evening with “Through the Years,” from her 1993 album Breaking the Silence, followed by “When the Party’s Over” and “From Me to You,” both from 1975’s Between the Lines, which reached #1 on the Billboard album chart. More than four and half decades since the album’s release, Ian’s voice remained as astonishingly warm, smooth and pure. It forced you to relax, like the feeling of relaxation after taking a deep breath.

Between songs Ian shared bits of funny, sweet, real moments from her life and musical career.  She spoke with a soft, even tone, like one would imagine a whisper; however, Janis’ voice was clearly audible. It was rather the peaceful, flowing cadence of her voice that took ahold of everyone’s attention and mesmerized the crowd. While the audience attending a performance is obviously filled with the artist’s fans, the adoration for Ian that evening felt even grander in nature. I took notice of the volume of the applause, as it felt strikingly more impassioned than one would have expected from the intimate crowd that evening. Between each song, there was a palpable feeling of joyful anticipation, as audience members excitedly awaited the beginning of each treasured number.

Additional songs on the setlist included Ian’s 1967 hit “Society’s Child,” as well as “Bright Lights and Promises,” “Tea and Sympathy,” and “Watercolors” from Between the Lines and“My Autobiography” from her 2006 album Folk is the New Black. This year Ian released what’s to be her final album entitled, The Light at the End of the Line. After more than 50 years of writing and performing that’s an apt title. On this evening, Ian performed songs from the new release, sharing inspiration behind these creations. “Resist,” was born from a need to protest

societal constraints and behaviors towards women. Ian shared being told as a teenager, ‘Girls don’t play guitar,’ to which at the time she acquiesced. This was the first of many instances she recalls being told what she could not do. The lyrics of “Resist” are open and direct, just “Society’s Child” was viewed to be 55 years ago. “I’m going to play this song at the end my career, just like I did at the start of my career,” Ian proudly stated, to the cheers of The Newton Theatre crowd.

Ian also shared about her musical influences, most prominently Nina Simone, stating she learned more from Simone in ten minutes than from any other artist. With love in her voice, she spoke of Simone as a genius, as well as a challenging individual. It was with this admiration that she performed “Nina,” from her final album, as well as “I’m Still Standing,” a testament to her over half-century long career. Of course, no Janis Ian performance would be complete without the 1975 #2 hit, “At Seventeen.” I must say, I felt chills (okay, I almost cried) upon hearing Ian’s still beautifully soft, melodic voice, singing the song I’ve loved since I was almost 10 years old. When a song makes such an impression on you as a child it really sticks with you! The evening’s encore “Better Times Will Come,” the last song on Ian’s final album, speaks to the belief that, “better times will come when this world learns to live as one.”

When I say, Janis Ian’s performance that evening “touched my heart” I speak of leaving the theater that evening with a sense of awe and a sense of calmness. I believe Ian’s beautiful voice (what she had to say and how she said it), both speaking and singing, and the peaceful joy she sent emanating through the audience, touched everybody’s heart. So, let’s all join together and make a reality of “Better Times Will Come.”