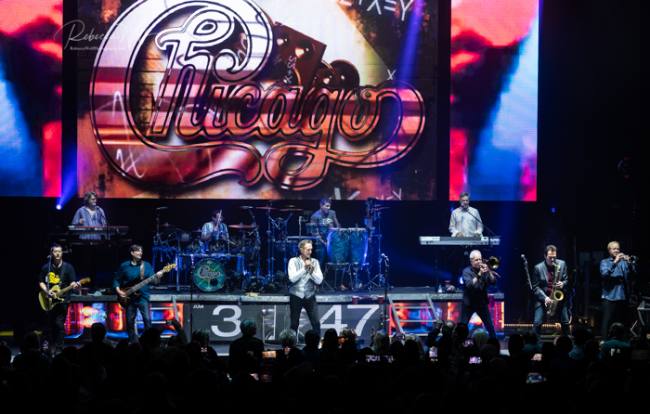 This year marks 55 years since the formation of the band Chicago. After attending their May 6th performance at The Capitol Theatre, I encountered several people who were shocked when they heard I’d just photographed the band. “They’re still playing?” they exclaimed, looking almost confused at the thought, calculating in their minds how young they were when they first heard Chicago’s early hits. Well, not only is Chicago still playing but their sound and stage performance remains spectacular!  What makes their performance infinitely more amazing is the three original members of the band who continue to perform and light up the stage, Robert Lamm (keyboards and vocals), Lee Loughnane (trumpet) and James Pankow (trombone.) It’s phenomenal to watch these musicians on stage and for a moment to consider the incredible musical history they’ve been integral in creating, and have remained with for more than half a century. What a legacy!

The band has seen multiple changes over the years with their additional members, most especially in recent years. However, what they have continually been successful in accomplishing is securing phenomenally talented musicians and singers who perform Chicago’s music with brilliant authenticity. With ten musicians on stage, each with his individual part in the sound and production, this cannot be an easy feat. However, to visually watch Chicago on stage is to witness a theatrical performance. Each musician knows his role, his stage cues, whom to interact with and when. Their motions are a natural ease and flow, like a dance.

This was especially impressive for the band’s bass player and backing vocalist, Eric Baines, whose first night with the band was that very evening. The band has had two additional members join the Chicago family within the past year, Loren Gold, keyboards and backing vocals, and Tony Obrohta, guitar and backing vocals. Longest non-original member in the group is Walfredo (Wally) Reyes Jr., who began on percussion in 2012 and took over the drum kit in 2016. That same year Ray Herrmann, who’d been a touring substitute since 2005, took the reins on saxophone, flute and clarinet. Neil Donnell joined as lead singer and acoustic guitar player in 2018, while the same year Ramon (Ray) Yslas moved on percussion. This combination of musicians has had such a short time together, especially due to the pandemic. Yet they function like a long-standing cohesive unit. What a tribute to the skills of these band members and the leadership of the “founding fathers.”

From the formation of Chicago, originally billed as The Big Thing, then Chicago Transit Authority, being a  self-proclaimed “rock and roll band with horns” has set them apart from other rock bands. While there are now a few rock bands that incorporate horns, Chicago featuring horns throughout their music has set them apart. It’s the band’s unique sound, energy and incredible songwriting that resulted in their impressive string of hit songs and albums; twenty-one top ten singles, eleven of which rose to number one, as well as five consecutive number one albums, with twenty-five of their thirty-two albums certified platinum. Chicago has also won multiple Grammy Awards, was inducted into the Rock and Roll Hall of Fame (the original members) in 2016 and in 2017 Pankow and Lamm were inducted into the Songwriters Hall of Fame. On the evening of May 6th, fans at The Capitol Theatre were treated to a performance worthy of such statistics and accolades.

The show began with “Introduction” from their  debut self-titled album Chicago Transit Authority, opening with an energetic blast and transitioning to a slower more melodic pace, both showcasing Chicago’s horn section, before turning focus to Obrohta’s ripping guitar solo.  As the crowd cheered this impassioned show starter, the band moved to the upbeat, clap-along feeling of Dialogue Pt.1 & Pt. 2 from their 1972 album Chicago V.  As if the crowd wasn’t already engaged by these two opening numbers, moving onto their beautifully sentimental hit “Call on Me” truly had everyone enraptured and many probably transported somewhere back in time. The cheery “Wake Up Sunshine” returned the light and breezy feeling to the venue.

Throughout the evening the setlist included 70s hit singles, “Make Me Smile,” “Does Anybody Really Know What Time It Is?,” “Just You ’n’ Me” and “Saturday in the Park,” as well as 80s hit singles,  “You’re the Inspiration,” “Hard to Say I’m Sorry,” and “Hard Habit to Break.”  No matter the mood of the song, there was never a moment when the audience was not completely fixated on the stage and absorbed in the moment. When the songs were upbeat and energetic fans danced in their seats and enthusiastically sang along with broad smiles on their faces. When the songs were slower and more heartfelt they joined in quietly, and rocked slowly to the beat.

Pankow on the trombone was a wonder to watch, moving with immense physical expression and joy while he performed. Herrmann’s passion on the saxophone was no less evident as he played with the spirit of his entire body. Every time Pankow, Herrmann and Loughnane congregated in a trio to showcase the horn section it was amazing to take in, as their energy and passion was significantly multiplied. Electricity emanated from the rear of the stage all evening, as Reyes, Jr. and Yslas enthusiastically performed with drumsticks and arms held high in the air. However, one of the most eye-catching displays of impassioned musical skill was their five minute non-stop drum and percussion showcase. The power and speed at which these percussionists coordinated their rhythm, switched positions and never missed a beat, all the while displaying utter joy, was awe-inspiring.

Donnell, lead singer since 2016, performed with incredible range of powerful, beautiful vocals that felt perfectly suited to fill the vocal space left by those who preceded him. While Donnell sang lead on most numbers, Lamm hit center stage on several occasions to play keytar and sing, his voice continuing to have a warm melodic tone. As the lights dimmed and the background screens morphed into soothing shades of blues, Loughnane, put his trumpet aside and sang lead on the heart-touching “Colour My World” with a soft, smooth voice.

Throughout the performance the background screens were lit with incredibly vibrant colors, designs, band logos and photos from Chicago’s early years. The lighting added another dimension and level of energy that exponentially raised the spirits in the venue. The evening’s last song, “25 or 6 to 4,” left no one seated, as the crowd sang with full gusto and joined in the energy ad elation of the band members on stage. While it’s been 55 years since Chicago emerged on the music scene, and created their “rock and roll band with horns,” nothing has  stopped them yet. And, it doesn’t look like they intend to be stopped, as this summer the band will be releasing a new album! So, here’s to year 56 and beyond! We are all looking forward to it! 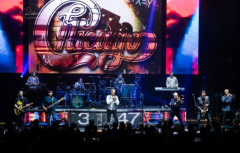 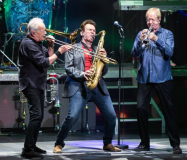 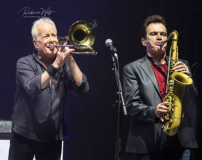 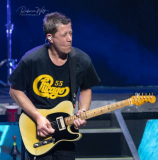