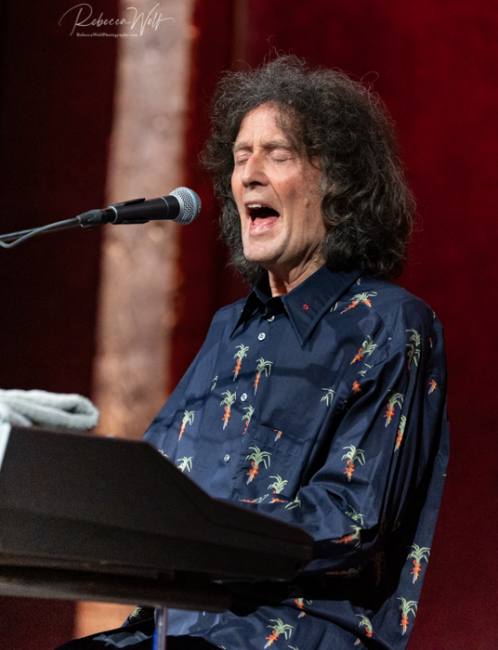 This month marks two years since the COVID-19 pandemic sent the US into what would become periods of lockdown, isolation, social distancing, mask-wearing, and general panicking. All interactive activities, as we knew them, came to a halt, and the world learned how to socialize via computer screens. We even became acquainted with, then accustomed to, listening to live music via online performances, and we wondered if the world would ever return to “normal”?  Music is such an integral part of our lives. For some it’s at the forefront and for others it’s merely a backdrop. However, most people would agree that music, at least certain songs, are a force that connects them to various life moments. While some enjoy listening in the comforts of their home, or singing at full lung capacity in their cars, there are plenty who get the greatest pleasure from experiencing live musical performances, where they can feel the vitality of the music, the passion of the musicians, and the energy of the crowd.

During the pandemic, previously scheduled shows were either canceled or postponed; some were postponed more than once, as the pandemic raged on longer than anyone could’ve imagined. Dedicated fans blocked new dates in their calendars, held onto tickets, and remained hopeful the next date would actually occur. In some instances, this hope was also tied to a bit of trepidation. Would the passage of time affect an artist returning to the road? As a passionate fan of 70s music, I’m thrilled to have the opportunity to attend performances of my favorite musicians from this era. I’m also keenly aware that as time moves on many of these artists will no longer be  able to perform, some sooner than later. As concerts were cancelled during the pandemic I frequently wondered how the passage of two years might affect the health and abilities of many performers.

Last summer venues began to slowly reopen their doors for concertgoers, albeit with much tentativeness and restrictions. Certain musicians quickly returned to the road, while others opted to make a slower reentrance. The same held true for fans; some returned quickly, while others remained more cautious and took a slower approach.  While each state has had their own regulations regarding vaccination status, proof of negative testing, and mask wearing in venues, in the were requirements of one form or the other in the NY/NJ area. That was until Monday, March 7th, when restrictions were removed.

On March 9th, two days after restrictions ended, I entered City Winery New York for Gilbert O’Sullivan’s twice rescheduled show, feeling quite unaccustomed to not have to whip out a vaccination card and ID at the front door.  Although COVID-19 has not been eradicated nor forgotten, as fans filled the beautiful new event space (which first opened for shows in a limited capacity last April, at its waterfront location) there was a sense of freedom and excitement in the air.  Awaiting O’Sullivan’s onstage arrival, audience members could be heard enthusiastically chatting about this long-awaited performance.

As the lights dimmed, O’Sullivan entered the stage and made his way to the keyboard with a grin on his face and a twinkle in his eye. The crowd erupted in cheers as the evening opened with the spunky, engaging, “January Git,” from his debut album, Himself.  It was apparent from this first number that the two year delay had not diminished O’Sullivan’s spirited vibe or sweet melodic tone. During the evening’s two sets, with a total of 29 numbers, O’Sullivan included songs ranging from his first 1968 single, “What Can I Do,” with its rhythmic, foot-tapping beat, to several songs from his self-titled 19th album, released in 2018.  More than 25 years after O’Sullivan’s first album,the 2018 album is as creative and fresh and boasts an incredible range of songs, from “The Same the Whole World Over” and “No Head for Figures but Yours,” both with an upbeat, 70s pop rock feel, to “I’ll Never Love Again,” a heart-grabbing song, made all the more beautiful at City Winery with the incredible guitar solo, performed by O’Sullivan’s accompanying guitarist, Bill Shanley.

When food is served at shows audience members are often distracted and only partially attend to the performance before them. However, throughout the evening O’Sullivan’s warmth and engaging demeanor kept the crowd completely enraptured. Whether singing fan favorites, like UK hits, “Nothing Rhymed” or “Clair,” (the latter a number two hit on the US Billboard Hot 100), or less familiar numbers, like 1975’s fun, energetic single, ”I Don’t Love You But I think I Like You,” or the sweet 2011 single, “Where Would We Be (Without Tea),” the audience was 100% drawn to O’Sullivan.  Before singing “Where Peaceful Waters Flow,” from his 1973 album I’m a Writer, Not a Fighter, O’Sullivan requested the crowd sing along during the refrain, then provided a mini practice demonstration. To O’Sullivan’s delight, at the expected moment the room joyfully erupted in song, leading O’Sullivan to stand at the end and give applause to his fans, who were simultaneously applauding him.

It felt impossible not to broadly smile and sway in your seat from the first notes of the cheerful, breezy, “What’s In A Kiss,” or the equally sweet and bright, “Can’t Get Enough of You,” both from the 1980 album Off Centre. As Shanley vocally accompanied O’Sullivan during “Can’t Get Enough of You,” the blending of their voices was so beautifully perfect, I felt momentarily transported to that musical era, more than 40 years ago (almost wiping away a tear.) “At the Very Mention of Your Name,” and “Forever Wondering,” both from 1989’s  In the Key of G, are quite different in tone and feel from O’Sullivan’s earlier work. While the two songs are themselves very different, “At the Very Mention of Your Name,” an 80s-style ballad and “Forever Wondering,” a catchy, spirited pop tune, both displayed more power and deliberateness than O’Sullivan’s previously light, airy numbers.

Periodically during the performance O’Sullivan shared stories in his kind, calm, Irish accent. As O’Sullivan spoke a quiet stillness filled the room (not often witnessed at performances), as all in attendance remained engaged in his every word.  O’Sullivan shared about his initial attempt at drumming and his early connection with Rick Davies, “the most important person to me.” Davies taught O’Sullivan to play blues piano and introduced him to Fats Domino.  However, O’Sullivan’s tenure with Davies was cut short when, “Rick joined a band that became Supertramp and I ended up being me.”  It was no surprised that O’Sullivan “being me” brought delighted applause from the adoring crowd.

As the evening was beginning to wind down there was a shout from the crowd with a request for, “All They Wanted to Say,” a song from O’Sullivan’s 2011 album Gilbertville. O’Sullivan paused for a moment, began to say he hadn’t intended to play the song, then quickly changed his mind stating, “I should do it; we are in NY and it’s about 9-11.” The crowd cheered as O’Sullivan began the beautifully sad tribute to a day that remains one of the most tragic in NY (and US) history.  No Gilbert O’Sullivan performance would be complete without the sentimental tearjerking 70s hit, “Alone Again (Naturally).” While it’s been 50 years since the song was released, O’Sullivan sang with incredible heart-wrenching beauty and wistfulness, while the audience eagerly joined during the refrain, “alone again, naturally.” The evening ended on an upbeat note with the fun-filled, energetic “Get Down,” as the crowd stood on their feet, clapping along, and some eager fans enthusiastically moved through the venue raising GET DOWN signs in the air.

When I originally planned to attend Gilbert O’Sullivan’s performance, about 2 years ago, I was excited to see him perform several 70s songs I loved. Little did I know I’d end up being drawn in by every song and so engaged by this immensely talented, warm, unassuming musician. While the pandemic may have pulled O’Sullivan temporarily off the road, it’s wonderful that he’s returned and is able to share his incredible body of work and truly engaging self with his multitude of fans. I’m already eagerly awaiting another O’Sullivan performance. 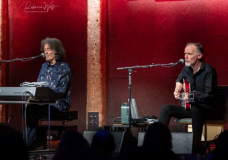 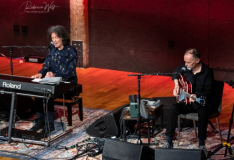