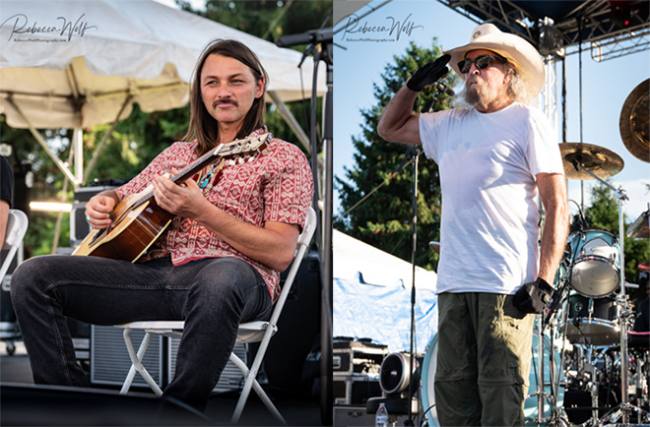 It was a steamy hot day at the 12th Annual Rock, Ribs, and Ridges Festival in Augusta, NJ. This three-day celebration of fantastic Southern Rock music, and barbecued delights brings an array of artists each year, along with crowds of music-loving, bbq-eating, cocktail-drinking fans. Well-known rock musicians perform at Rock, Ribs, and Ridges every year and this year was no exception. Over the course of the three days, performers included Dave Mason, Duane Betts, the Artimus Pyle Band, Don Felder, Molly Hatchet and Jim Messina (amongst others).  Attending the festival on Saturday June 25th, I was fortunate to be in attendance for Duane Betts and the Artimus Pyle Band.

This summer Duane Betts is performing his Dog Daze Acoustic Tour with Berry Duane Oakley on bass and Johnny Stachela on acoustic and slide guitar, both bandmates from the Allman Betts Band. Having frequently seen these three musicians with the Allman Betts Band, this was a vastly different musical performance. Hearing Betts, Oakley and Stachela as an acoustic trio felt like a calmer, more soulful experience. There’s nothing quite like listening to the layered sounds of three guitars and 3 intertwining voices.

The set opened with Betts singing “In and Out All Over Again,” a toe-tapping, bluesy rock number. This combination of blues and rock create the perfect foundation for the upcoming hour and a half of music. During various songs the trio’s sound felt soulful and melancholy, while in other instances it was upbeat and spirited. Regardless of the mood of each number, the sound was consistently full of  texture and dimension, built on multiple guitars and vocals.

The set included covers of Allman Brothers songs, several Allman Betts numbers, a Grateful Dead classic and a Black Crowes original. The band also performed a song from Betts’ first solo release, as well as  showcasing a new piece from Betts’ upcoming album, recorded with Oakley and Stachela.  The Grateful Dead’s “Althea,” was a perfect song to display Betts’ melodic and soulful vocals, along with Stachela’s impeccable guitar skills. Betts again sang lead, sounding much like his father, on The Allman Brothers’ “Blue Sky,” a song originally penned and sung by Dickey Betts. With Oakley joining in during the chorus, it was a superb combination of vocal abilities for this classic Allman Brothers’ jam.

As the bass player in the trio, Oakley was behind the rhythmic sound that added depth to the music. Oakley added flavor not only through the sound of his bass but from the emotional expressions that could be seen on his face and his body as he performed. Betts and Oakley voices again blended amazingly well together during a beautiful cover of the Black Crowes’ “Wiser Time.” Performing a vocal solo during the number, Oakley sang with passion and richness in his voice, while Stachela performed a beautiful slide guitar solo, and Betts added rhythmic guitar-picking, all of which created a touching melancholy sound.

Spirited, upbeat numbers in the set included the Southern vibe of “Taking Time,” from Betts’ first album, as well as “Shinin” from Allman Betts’ debut album. Both songs included the vocals of all three musicians, making a wonderful full-bodied sound. Additional Allman Betts’ songs in the set included  the cheerfully melodic “Rivers Run” and one of my favorite Allman Betts songs, the soulful “Autumn Breeze,” with Betts on vocals and Stachela playing his incredible slide guitar.  Stachela’s abilities on slide guitar again were on full display for the start of “Done Somebody Wrong,” a beautiful blues song originally performed by blues singer Elmore James, and later by The Allman Brothers. On this occasion, the song was expertly performed by Berry Duane Oakley, who sounded like a real “blues cat,” with a rumbling, bluesy voice.

Sharing with the crowd the song “Colors Fade,” from their forthcoming album, Betts’ heartfelt vocals melded with those of his bandmates, and Stachela’s slide guitar, to create a unique tone. This song was so engaging it made me eager to hear the rest of the album. The final song of the set was the Allman Brothers’ instrumental number “Little Martha.” The sound created as Betts and Stachela played their guitars in unison, combined with Oakley’s bass layer, was the perfect, soulful way to end an incredible Betts, Oakley and Stachela acoustic performance. Having previously heard these musicians as part of a larger band it was a wonderful to now experience them in an environment that more clearly highlighted their skills individually and as a beautiful acoustic trio.

Leaving the calm and peaceful behind, Duane Betts was followed on stage by The Artimus Pyle Band, led by the former drummer for Lynyrd Skynyrd, Artimus Pyle. In order to showcase the music written and performed by Ronnie Van Zant, Pyle has surrounded himself with four masterful musicians, including Brad Durden, keyboards and lead vocals, Scott Raines, guitar and lead vocals, Jerry Lyda, guitar, and Dave Fowler, bass. While Pyle carries an incredible musical legacy and remains an impassioned drummer, it’s with the skill and artistry of these four musicians that the bold Southern Rock spirit of Skynyrd has been recreated.

From his perch behind the drum kit, Pyle remained the iconic figure at the center of the band. Wearing a cowboy hat atop his shock of long gray hair, sunglasses, and a shaggy goatee, Pyle presented as the perfect picture of an original 70s Southern rocker. The beating of Pyle’s drums opened the band’s set, as Durden passionately sang lead on “Saturday Night Special.” Throughout the hour and 15 minutes of Lynyrd Skynyrd favorites, Durden and Raines shared lead vocals, Durden singing the numbers that embodied more passion and soul, including “Simple Man,” “Searching,” and “On the Hunt,” while Raines sang those with more of a rock flare, including “The Ballad of Curtis Lowe,” “Gimme Three Steps,” and “Street Survivor.”

The blazing sun did nothing to dissuade these die-hard Skynyrd fans, who were thrilled to see Pyle perform and hear the beloved music of this iconic band. Throughout the performance a large general admission crowd remained standing, as well as seated in lawn chairs, in the areas surrounding the stage. The VIP section in front of the stage and canopied areas were equally as packed. Regardless of location, fans energetically sang along, danced and cheered, some holding banners in dedication to their beloved band.

Raines and Lyda were an impressive guitar duo, each guitar adding a layer of rock and roll sound. Raines’ love for the music and performing was apparent by the passion in his expressions and his movements on stage. However, no one showed as much expression as the band’s newest member, bass player Dave Fowler. Fowler was a thrill to watch as he strut across to stage to jam with Raines and Lyda, and made a multitude of amusing, rock and roll, facial expressions that clearly portrayed his joy and passion for the music and performing with the band.

While the energy in the audience during the entire performance was electric, the voltage amped up to new levels as the band began “Sweet Home Alabama,”  accompanied by hundreds of enthusiastic voices in the crowd. Of course no Lynyrd Skynyrd set would ever be complete without the incredibly beloved Southern rock anthem “Free Bird,” to end the performance. After almost 50 years, this song remains timeless and carries with it the passion with which it was written and has been performed for almost half a century. As the first instrumental lines of the song began, Pyle stood at the center of the stage at attention, with his right hand in salute, before bowing his head and placing his hand on his heart. Returning to his seat behind the drums, Pyle began playing “Free Bird’s” passionate drum beats, while the iconic opening instrumentals continued. Singing lead vocals, Durden’s heartfelt, aching tone was the perfect match for this now larger-than-life song; a perfect ending to a this fabulous performance of the music created by Ronnie Van Zant and the original members of Lynyrd Skynyrd.

After experiencing two of the amazing performances at this year’s Rock, Ribs, and Ridges Festival, I’m certain next year I will have to return for even more incredible Southern Rock music! And, I just might even have to add in some of that barbecue as well! 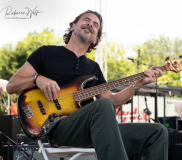 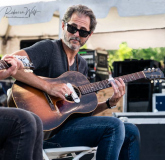 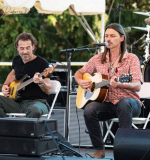 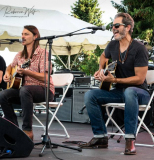 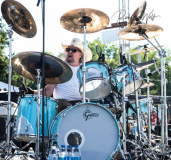 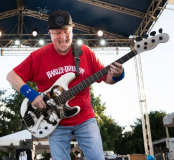 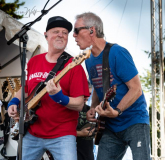 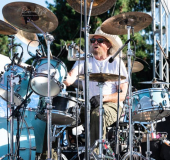