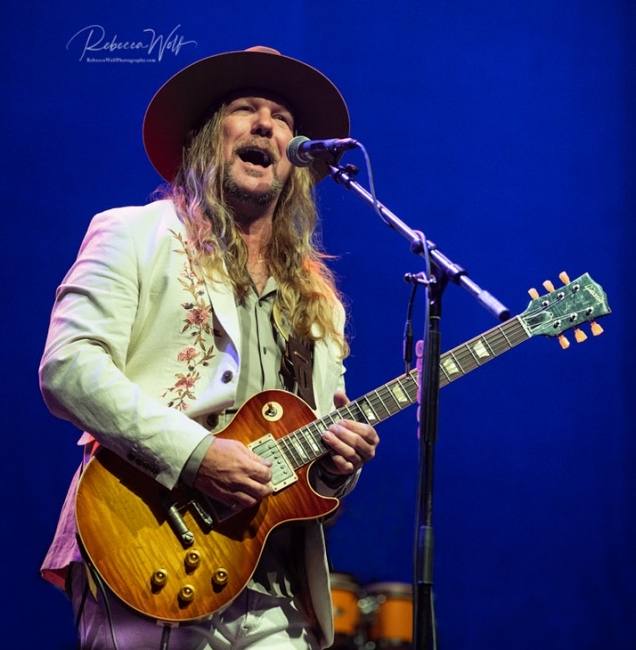 (with the Dirty Dozen Brass Band)

On a recent morning ride to work I was listening to SiriusXM Volume; a great station for hearing discussions on the current music industry, as well as connecting to the music and artists from the past several decades. A conversation was taking place regarding the fluidity of musical genres today and the loosening of boundaries that in the past were more definitive. In the earlier days of rock, Motown, and disco, and later on hip hop and rap, each of these genres appeared to have more clearcut parameters and a specific fanbase. However, in the last 15-20 years, even moreso in the past decade, the blurring of genre lines has increased. Coinciding with this blurring of boundaries, genres that were previously associated with certain locations and groups of people have been expanding beyond those bounds.

It would seem that the most likely explanation for musical genres spreading to people and places where there’d been limited exposure is the explosion of digital music and steaming services. When digital music became mainstream, an enormous range of music suddenly became easily accessible to the masses. As something becomes easy to acquire, people are more prone to taking a chance and checking it out. Music that someone may not have traveled to the store to purchase instantly could be sampled at home. And, once you try something you just might like it. Thus, with the general population exposed to a wider range of music, the result has became a greater interest in a variety genres. I believe this new openness has contributed to the blending of genres that we now frequently hear in today’s music. With this evolution in the music industry, it’s not unexpected that live musical performances would begin to evolve as well, bringing performers together who previously may not have shared the same stage or even the same concert bill.

I had the fortune to experience one such performance at the Count Basie Center for the Arts on June 16th. The Devon Allman Project has been on tour with Samantha Fish since early spring, along with a wide range of artists who joined the “project” during the course of the tour. The pairing of Devon Allman and Samantha Fish may initially seem surprising to some. Devon Allman presents as the consummate Southern, blues rocker. At the Count Basie he sported a wide-brimmed hat, white jeans and an embossed white blazer, all of which complimented his powerfully rich, textured vocals. Alternatively,  Samantha Fish appeared on the Count Basie stage as the personification of rock and roll, with platinum blonde hair, black leather pants, an iridescent jacket, and a high-spirited, rocker voice. However, while the expressive styles of Allman and Fish may differ, the energy, artistry and individual rock vibe of each artist perfectly aligned for an amazing double-bill performance.

This evening at the Count Basie was actually not a double-bill but a triple-bill. While one might think the obvious choice for a band to open for Allman and Fish would be a bluesy rock band, this evening began with a brass band that formed in New Orleans 45 years ago. The Dirty Dozen Brass Band initially became known for incorporating funk and “bebop” to New Orleans’ traditional jazz sound. While many of the musicians and the instruments have changed over the years, the Dirty Dozen Brass Band has continued to create their own fusion of jazz, funk, soul, and R&B that has kept their fans enthralled with their high-energy and pure sound.

The Dirty Dozen Brass Band filed the Count Basie stage with musicians and instruments, including a trumpeter, trombonist, sousaphonist, tenor saxophonist,  baritone saxophonist, drummer and guitarist. From the moment these incredible musicians hit their first dynamic notes the mood for the evening’s musical event instantly became joyful and energetic. With brass players performing across the expanse of the stage, everyone’s attention was immediately grabbed by the rhythmic, jazz funk beats, and passionate instrumental artistry. Whether playing in unison or highlighting the expertise of each musician, a positive, spirited vibe wafted through the venue.  It was impossible not to feel the need to move along to the beat, whether swaying in your seat, bobbling your head or tapping you feet. It was equally impossible not to notice the broad smile across your face and as your gaze remained fixed on the stage for the band’s 45 minute set. For those of us who came to the venue unfamiliar with the Dirty Dozen Brass Band and funky, rhythmic, jazz beats, this was a worthy introduction to the band, the sound, and the energy of the upcoming musical sets.

The theater remained abuzz, primed with a foundation of high spirit, as Samantha Fish fans eagerly awaited the arrival of their rock idol. In the 11 years since the arrival of her debut album, Fish has built up quite the loyal following. Ask any Samantha Fish fan to talk about her and before you’re done asking rave reviews come spilling forth; whether it’s regarding her phenomenal guitar skills, her wonderfully powerful vocals, her incredible songwriting, or everything rolled into one exceptional rock and roll package.

Like a bolt of lightning, the electricity in the Count Basic shot through the roof the moment Fish burst onto the stage with her larger than life stage presence. Fish’s passionate self-expression was evidenced through the intensity of her vocals, as well as her undeniable emotional connection to her guitars. It was as if the guitars were an extension of her body, as her fingers expertly and swiftly flew up and down the neck of the guitar. Throughout the hour and 15 minute set Fish’s skills on the guitar were a marvel to watch…..awe-inspiring. You couldn’t get anymore rock and roll than Fish as she jammed on the guitar, flipped her hair and put her whole body into each and every number.  At times it appeared as if she was in a zone….immersed in the energy and passion of the music. While Fish could be completely lost in her music, she consistently presented a sense of connection and dedication to her fans, who responded in return with  rapturous applause at the culmination of each song.

While Fish might be the white hot center of the fire, her band members, Matt Wade on keyboards, Sarah Tomek on drums, and Ron Johnson on bass, added fuel to the fire and with their own red hot flames. The evening’s set included Samantha Fish favorites, “Bulletproof,” “All Ice No Whiskey,” “Better Be Lonely,” “Bitch on the Run,” and “Black Wind Howlin’.”  Samantha Fish and her band delivered an electrifying rock performance at the Count Basie. With stellar vocals, spectacular musicianship and an amazing selection of songs, it’s no surprise that Samantha Fish’s performance was an incredible hit.

The excitement from Samantha Fish left the audience fired up and ready for the Devon Allman Project to hit the stage. While Devon Allman himself has been playing and touring for the better part of the past 30 years, the current line-up of the Devon Allman Project formed in just the past few months. Included in the band are Jackson Stokes on guitar, Justin Corgan on bass, John Lum on drums, David Gomez on percussion and saxophone, and newest member, Andrew Stephen on keyboards.

When Devon Allman walks onto a stage, any stage, there’s never a lack of enthusiasm from the audience. Allman exudes an air of confidence and charisma, even before the first note reverberates from the strings of his guitar. Allman’s energy and sound are very different than Samantha Fish, but equally as powerful and spirited. While it was after 10:00 when the Devon Allman Project hit the Count Basie stage, the energy from the crowd heightened with the band’s arrival. Opening the set with original instrumentals “African Introduction” and “Wash in G” was the perfect transition to the blues rock groove of the Devon Allman Project. There was a jam band feeling to the music that escalated in intensity, and crescendoed with Gomez’s incredible saxophone solo.

As the band moved into a cover of Royal Southern Brotherhood’s “Fired Up”  the mood in the venue seemed perfectly matched to the song’s title and spirit. Allman’s blues rock voice is rich and full of soul. When Allman sings there’s always the sense the music is coming from deep within, whether he’s singing a cover of The Spinners’ melodic “I’ll Be Around,” The Allman Brothers Band’s beautifully touching, “Melissa,” or the rhythmic  “Down to the River,” from the Allman Betts Band’s debut album. If it’s possible to hear “history” in someone’s voice that is what you hear and feel when Allman sings. It not that Devon Allman sounds like his father Greg….his tone is quite different and unique. It’s that his voice speaks of someone steeped in a lifetime and legacy of music.

As the clocked ticked past 11:00 the spirit on the stage and in the audience remained at peak level and no one had any desire for this incredible night of music to come to an end. The Dirty Dozen Brass Band and Samantha Fish joined the Devon Allman Project on stage to perform The Allman Brothers Band’s “One Way Out.” Adding a funk brass band to the classic Southern rock jam was the perfect mixture of multiple musical genres. With the brass band leaving the stage, Allman and Fish revisited the song that connected them nearly a decade ago, the Tom Petty/Stevie Nick’s duet “Stop Draggin’ My Heart Around,” a perfect combination of bluesy rock and roll. Of course no Allman performance would be quite the same without the Allman Brothers’ “Midnight Rider” to end the night….a song that always brings immense passion and cheers from the crowd.

How incredible is it that in this musical climate we have the opportunity to see and hear performances that cross boundaries, and incorporate music and musicians from diverse backgrounds, of varying ages and from different genres. The guest on SiriusXM Volume was correct; people today want variation, and boundaries and distinct categories are not necessary. Now isn’t that a good life philosophy overall?? 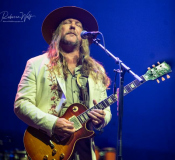 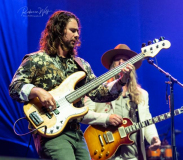 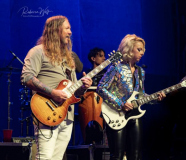 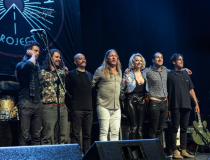 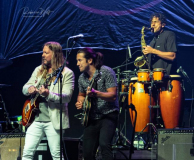 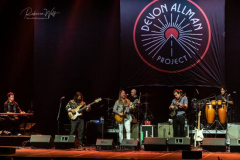 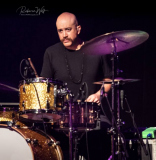 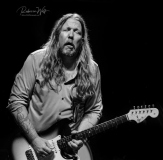 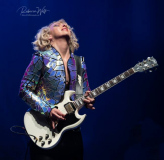 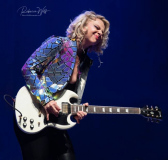