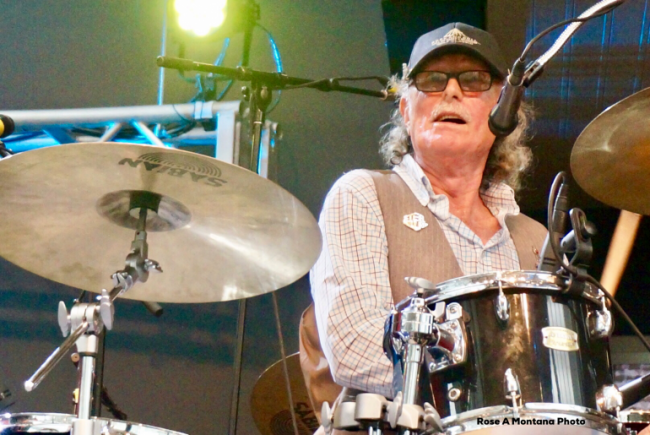 When sound check is show quality, be prepared to be blown away. With The Wonderful Winos, expect nothing less.
Their band lineup on the Klipsch Main Stage of the Rock & Roll Hall Of Fame on August 16, 2018 was Rock & Roll Hall Of Famer drummer and singer Vini “Maddog” Lopez; New Jersey Blues Hall Of Famer, lead guitarist and singer/songwriter Gary Cavico; well known singer, bassist and harmonica player, Jon Sebastian Brice; and substituting for Frank “The Flash” Frasche was E Street Band member, original Asbury Juke and original & current Disciple Of Soul touring with Little Steven Van Zandt, Saxophonist Eddie “Kingfish” Manion.
Introduced by Greg Harris, CEO of Rock & Roll Hall Of Fame on this, the day of Aretha Franklin’s passing, Manion opened the show with “Amazing Grace” featuring an emotional interpretation and backed by the band.
It was easy to see why these accomplished troupers were present as they engaged the audience in their presentation. Brice, Cavico and Lopez took turns on lead vocals and instrument solos on popular eclectic tunes, originals by Cavico, the legendary Bill Chinnock and Rock & Roll Hall Of Famer Bruce Springsteen while Manion wowed the crowd both from the stage and dancing throughout the crowd while his saxophone echoed in the six-story high ceiling of the venue.
Brice started off the set with “Little Sister” and, in his rotation, followed with classics “Great Balls Of Fire” and “Folsom Prison Blues.”  As a tribute to the late Tom Petty, Brice chose “Mary Jane’s Last Dance.” The last of his lead songs was “High Cost Of Living” however, his harmonizing and attributes as a bass and harmonica player were highly evident as the set progressed.
Cavico’s choices varied from the fun tunes of “All Liquored Up” and “Ooh Poo Pah Doo” to a mesmerizing song Cavico wrote with emphasis on saxophone, “Victim Of Justice.” During “Seventh Son” you can’t decide which you like better, Cavico’s singing or his guitar playing as both are top shelf.  Cavico and Manion, playing together again as they did in high school, were effortlessly synced. Whether Cavico was singing lead or backup, his guitar was smoking.
Always full of surprises, Lopez took the audience wherever he wanted to go and they happily followed. Taking his turn at lead vocals, Lopez proudly announced “Crown Liquor” was written by his dear friend, the legendary Bill Chinnock. Immediately, his clear voice seemed to reach every bit of space in the Rock Hall. With a smile, “You Can’t Catch Me” had toes tapping. Asked to play longer than planned, it was a quick decision. As always, when Lopez performs “A Pirate Looks At Forty” his voice is filled with emotion.
Three songs written by Springsteen were delivered. “The Train Song” and “Janey” were straight out of Steel Mill days. Lopez told the audience of Springsteen requesting Lopez sing lead on “The Ballad Of Jesse James” at a band reunion in 2017 and then quickly launched into it. Still making things fun, Lopez reminds everyone of his nickname as he sings Charles Sheffield’s “Mad Dog” and Manion leaves the stage wirelessly for the second time to engage the crowd.
The show was wrapped up with the previously mentioned “Janey” and Lopez shows us why he is a Rock & Roll Hall Of Fame Drummer.
The Wonderful Winos perform nationally.
[Show slideshow] 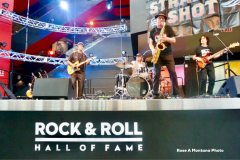 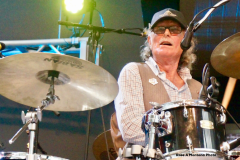 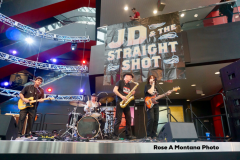 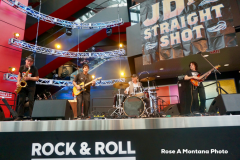 Photos and Review By Rose A Montana