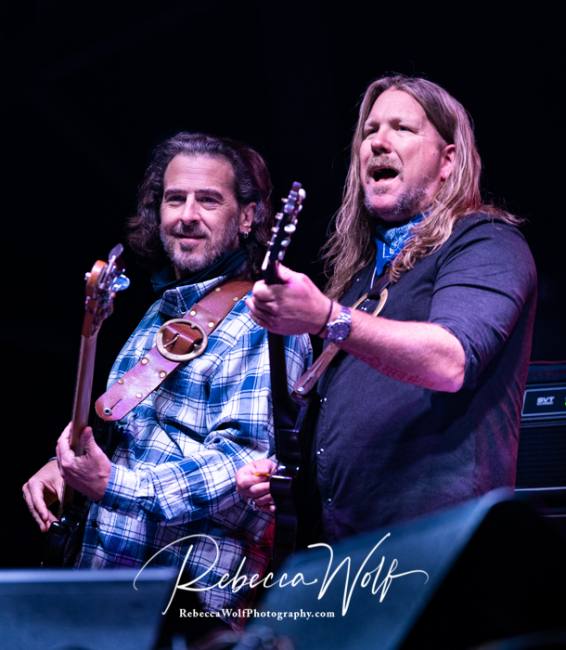 I felt shear excitement as I packed up my cameras for the first time in 7 months to head out to shoot a concert. This global pandemic put an abrupt end to life as we all knew it, and halted live musical performances more than half a year ago. Having the opportunity to attend a live performance and photograph a band was an experience I’d been longing for, and was unsure when would happen again. As luck would have it, the stars where shining down on me on the night of September 19th. Not only did I have the opportunity to be in the presence of live music and photograph the band, but it was a band that’s come to be one of my favorites since their emergence on the music scene less than two years ago. This band is the Allman Betts Band.

The names Allman and Betts have been revered in the rock and roll history books for decades and are associated with the roots of Southern Rock. While sharing a name and a family history might get your foot in the door, talent, skill, creativity and passion are required to keep you there. That is what this second generation, the sons of Greg Allman, Dickey Betts and Berry Oakley set out to do. With the recent release of their phenomenal sophomore album, Bless Your Heart, the Allman Betts Band is proving that while they are proud to be carrying on the legacy of their famous fathers, they are here to forge their own name and their own musical path.

This is a challenging time to release a new album. Recorded last December at the famed Muscle Shoals Sound Studios, Bless Your Heart, was intended for release earlier in 2020. With the country on lockdown, plans were stalled and touring the album became an unlikely possibility. However, music is created to be shared and to bring people together and this is what the Allman Betts Band was intent on doing. While the album’s release may have been delayed, the band pushed through the unforeseen barriers and released Blessed Your Heart on August 28th. This album release came with much anticipation from enthused Allman Betts fans, who’d already delighted in the tastes of what was to come, with the prior release of songs “Magnolia Road” and “Pale Horse Rider”, in both audio and video formats.

Longing to showcase and personally share their new music with fans, the Allman Betts Band made the decision to head out on tour…. albeit a different type of tour. The concert road has currently changed for musicians and their fans. There are no indoor venues packed with enthused fans, crowding the stage, dancing in the aisles, or singing and clapping from their seats. So, how could touring musicians do what they love…. play for their fans in an environment that provides safety of all, while offering that personal live experience? The answer came in the form of drive-in concerts. Drive-in theaters, popular in their heyday for showing feature films to those watching from the comforts of their own vehicles, have largely disappeared from the landscapes of modern America. Who knew these icons of American history, would become the savior of the day for musicians in search of a place to perform and for fans desperate to hear their beloved live music.

In late summer, prior to the release of Bless Your Heart, the Allman Betts Band dipped their toes into the drive-in concert experience, with a few shows in New England. However, traveling to the East Coast for three concerts this past week, was their first time performing live since the release of Bless Your Heart, and their live debut of several songs from the album. September 19th, at the Circle Drive-in Theatre in Scranton, PA, was the final performance of the East Coast shows. The skies were clear that night, the stars were bright, and the air was very brisk. Standing onstage, perched atop a hill, the band members looked down upon the field of cars and fans below. Fans sat parked in cars, pick-ups, SUVs and folding chairs…others stood wrapped in blankets. The stage was dwarfed by a monumental movie screen standing alongside. With two-story images of the band members projected on the screen, and enormous speakers flanking the stage, all in attendance were able to share in the Allman Betts sound and experience, regardless of their socially distanced location. Throughout the night, honking horns and flashing headlights replaced the cheers of clapping hands…. assuring that the band members, standing upon on the hilltop could feel the love and appreciation from below.

The band’s opening numbers, “Airboats ‘n Cocaine” followed by “King Crawler”, both from Bless Your Heart, began the night with the musical energy and enthusiasm that the musically starved fans were craving. The Grateful Dead classic, “Shakedown Street” followed, giving Berry Duane Oakley the opportunity to sing lead vocals, and to encourage the already enthused fans to sing and dance alongside their cars. While Oakley does not often sing lead, one has to listen no further than “The Doctor’s Daughter”, on Bless Your Heart, to experience his beautiful, soulful vocal expression.

Singing lead vocals, and playing lead guitar alongside slide guitarist Johnny Stachela, Duane Betts beautifully wove a tale of childhood, growth and moving on, in “Autumn Breeze”, from ABB’s debut album, Down to the River. Betts’ poignancy and yearning drew listeners in, and gave the feeling that these were personal, life circumstances experienced by Betts. Both Betts and Stachela are masters on the guitars and their extended jams during multiple numbers were remarkable to witness. One of the most impressive songs of the night was the 12-minute instrumental “Savannah’s Dream”, from Bless Your Heart. From keyboards (played by John Ginty), to drums and percussion (played by John Lum and R. Scott Bryan), to all four guitars, there was an ebb and flow throughout the song. As the name of the song states, you felt as if YOU were in a dream…. riding the waves through peaks and valleys, intensity and calmness.

Throughout the night there was a perfect combination of upbeat jams, mixed with smooth soulful pieces. Additional songs in the set, included the bubbly, “Magnolia Road”, the sultry “Down to the River” and the intense, aching “Pale Horse Rider,” the latter two with Allman’s incredibly textured, baritone voice on lead vocals. Adding more musical flavor to the evening was a dash of Tom Petty, and a splash of Allman Brothers. The final song of the night, “Midnight Rider” was the perfect tribute to the gentlemen and band from which this new generation, were created.

As the temperature dropped from brisk to downright cold, Allman commented to the crowd that they weren’t used to playing in such temperatures and it was hard to feel his fingers. “The guitar strings don’t like it either,” he laughed, while tuning his guitar. “We’re still GREAT, though!” Betts piped in….. something that there was no need to remind the fans, as it was obvious from the beeping horns and flashing lights that everyone out there agreed! 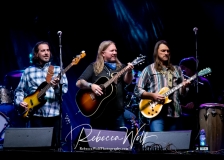 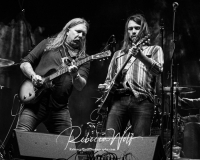 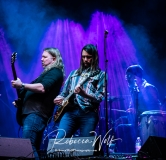 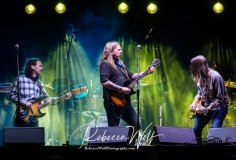 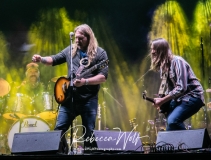 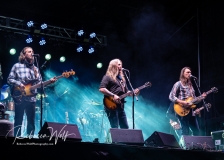 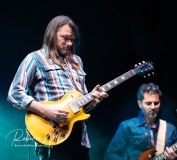 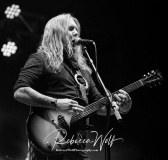 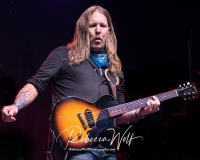