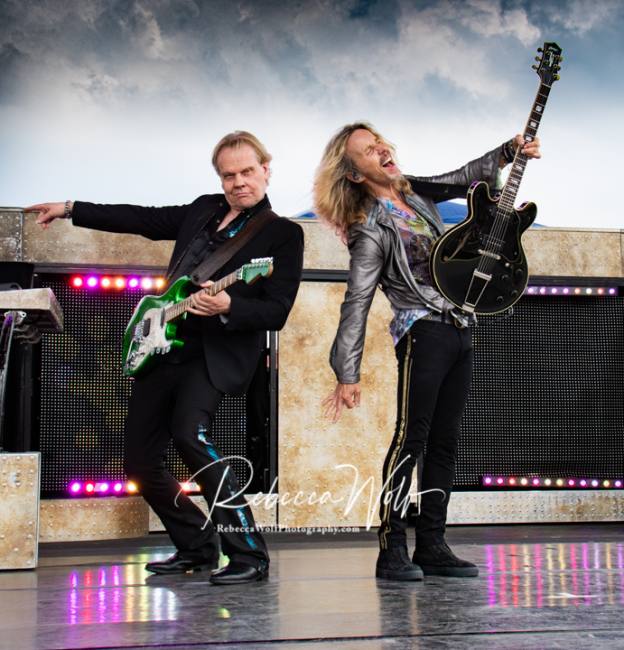 Styx – Crash of the Crown Tour

Sunday’s blistering heat did nothing to diminish the crowd at the main stage of The New Jersey Lottery Balloon Festival. Fans of the band Styx had no intention of being deterred by the sweltering sun or oppressive humidity. Having the opportunity to enjoy live music again, after more than a year barred from crowds and sheltered from interactive experiences, would’ve been motivation enough to draw an audience for an afternoon of music. But….when the music is being performed by an iconic band, one that’s been sharing their incredible musical skills for almost 50 years, that motivation is magnified tenfold. Fans packed the sold out seating area, and blankets and lawn chairs filled the hill looking down upon the stage. For the Styx band members, after almost a year and a half without performing, witnessing the sea of enthralled faces, must have been a thrill as well.

Over the past 5 decades, Styx has weathered periods of dissolution and reconnection, as well as changes in personnel. However, a driving force has kept their music and ultimately their band alive. The foundation of this force, and the carriers of the torch, have continuously been Tommy Shaw (guitarist/singer-songwriter) and James “J.Y.” Young (guitarist/singer), with support from original founding band member, bass player Chuck Panozzo.

Since the band’s inception in 1972, Styx has released 17 studio albums, each showcasing a unique energy and vibe. Their musical catalogue runs the gamut from songs with a mellower, pop rock, theatrical feel, to those with a harder more rock and roll edge. Styx’s commercial success began in 1973, with “Lady,” from the band’s second album Styx II. In 1974, the song began receiving nationwide airplay, after local success in their Chicago hometown, and reached #6 on the Billboard Top 40 in March 1975. By this time, the group had already released 5 albums. In December 1975, Tommy Shaw joined the band, leading to the release of their 6th studio album, Crystal Ball, in 1976. However, it was Styx’s 7th album, The Grand Illusion, released on 7/7/77, that was their breakthrough, reaching triple platinum, and including “Come Sail Away,” a #8 hit in 1978. The group’s 9th album, Cornerstone yielded Styx’s first and only #1 hit in 1979.

In 1981, the band released the concept album Paradise Theater, which became Styx’s biggest hit album. The album reached #1 on the Billboard pop albums charts, and included the #3 single, “The Best of Times.” After their 4th multi-platinum success, the band followed with a rock opera concept album, Kilroy Was Here, which went platinum in 1983, and included the #3 hit, “Mr. Roboto” and the #6 hit, “Don’t Let It End.” By 1984, Styx had amassed 7 top 10 Billboard Hot 100 ranked hits.

After parting ways in 1984, the band members rejoined forces in 1990, and released Edge of the Century, which produced their #3 hit on the US Billboard Hot 100, “Show Me the Way.” Throughout the 90s the band endured some short-term disbandments and reconnections, as well as several lineup changes. However, with the new millennium came a renewed sense of solidarity and direction. Styx’s recreated line-up released several live albums, and in 2003 released the studio album Cyclorama. In 2005,  they followed with an album of covers, Big Bang Theory.

Throughout the past 2 decades, Styx has continued to tour extensively, and have headlined with Yes, Foreigner, REO Speedwagon, Def Leppard, Tesla, and Don Felder. They’ve supported charity events, and participated in benefit concerts. In 2017, the band released their studio album, The Mission, a concept album about a mission to Mars.

During the pandemic, while sidelined from touring, the band was not sitting idle or prevented from their creative endeavors. Instead they used this precious time to write and record a new album, Crash of the Crown. Released on June 18, 2021, the album has been given rave reviews, including one that described the album as, “one of the very finest in their catalogue.” With the world now beginning to open their doors to live music, this was the perfect time for Styx to showcase their lockdown creation to the eager, concert-deprived fans.

Despite the heat, the band members burst onto the stage on July 25th with energy and electricity.  Throughout their 1hr and 45 min performance there was never a moment that their enthusiasm or positive spirt wavered. “We made the new album, Crash of the Crown, so you’d have something to come out to!” Tommy Shaw announced to the cheers of the crowd. In looking back over the entirety of the concert, the most appropriate word that comes to mind to describe the show is exhilarating.

Opening with Crash of the Crown’s “The Fight of Our Lives,” the band members sang in unison and solidarity, a perfect anthem of power after the “battle” we have all recently endured. The high spirit continued with crowd favorites “Blue Collar Man” and “The Grand Illusion.” Most eye catching and captivating to watch on stage was keyboardist and singer Lawrence Gowan. The splash of purple in Gowan’s hair perfectly suited this vibrant, bold performer. As Gowan’s keyboard rotated he raced from one side to the next, playing from the front, from the back, and leaping into the air, all while his fingers raced across the keys. As amazing as Gowan’s keyboard skills, his voice was equally as impressive. Transitioning from the opening numbers, to the ballad, “Lady,” Gowan’s incredibly rich, powerful voice was enthralling.

When Tommy Shaw stated to the audience, “It seems like Styx has always been here,” the resounding cheers were a sign the fans concurred. But really, hasn’t Styx always been? For many audience members Styx was part of the fabric of their youth and has continued to be woven into their musical adulthood. Hearing Tommy Shaw sing “Fooling Yourself” can bring you back in time, because Shaw’s voice remains as strong, clear, and melodic as it did decades ago. Even in the brutal heat, Shaw’s voice during “Crystal Ball” can still give you chills.

The additional songs performed from Crash of the Crown, including “Reveries,” “Sound the Alarm” and the album’s title song, all sounded unique, fresh and every bit grounded in “good old” rock and roll. In a time when the new generation of music is no longer rooted in the classics, and often times is devoid of even musical instruments, experiencing new rock, played by supremely talented  musicians, the “old-fashioned way,” was a gift to Styx’s fan and fans of rock and roll alike.

James “J.Y.” Young, a Styx member since 1972, continued to own the stage on his guitar, with a passion that belied the passage of almost 5 decades. Jamming with Shaw throughout the show, the strong connection these band brothers have with one another was obvious. With the exception of recent addition Will Evankovich, the Styx members have spent at least the better part of 20 years as bandmates (including Ricky Phillips on bass and Todd Sucherman on drums), and played like a close-knit family. Even Evankovich, who previously spent several years producing and co-writing with Styx, appeared to have been adopted into the folds of the band family. As would be common in a close family, there was pride in Shaw’s voice as he introduced the patriarch of the group, Chuck Panozzo, who joined the band on stage and played bass during “Fooling Yourself,” and returned for the encore.

Most audience members braved the heat from their seats for much of the performance…singing along, swaying in their chairs and raising their arms to the music. However, the heat and the sun were all but forgotten for the encore performances of “Mr. Roboto” and “Renegade.” The moment those first robotic notes came pumping through the speakers fans were up on their feet, putting every last drop of energy into projecting their voices and sharing their appreciation for the band and their music.

As fans filed out of the venue, I overheard the musings of one fan, as he turned to his friend and said, “Wow, either they sound exactly like they do on their albums…..or they are really good at lip-syncing!!” What a testament to the Styx band members after all these years. I can surely testify …. these are just incredible musicians and singers! 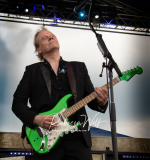 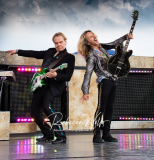 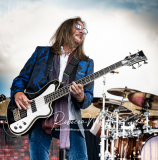