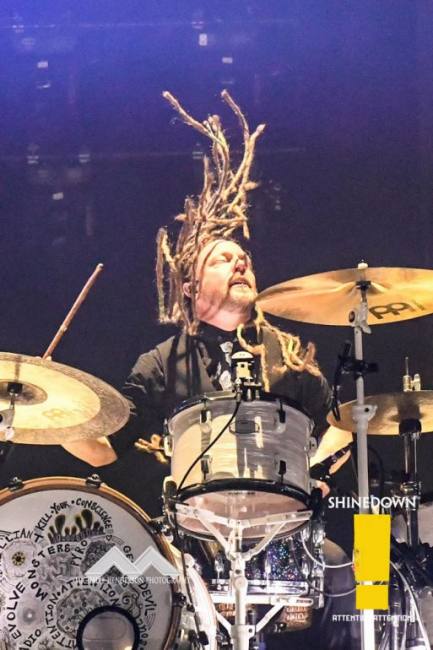 GET UP and See ATTENTION ATTENTION tour it’s BRILLIANT

I’m going to try not to “Fan Girl” this review too much, but I am not going to lie I am sure it’s going to show through so that’s why I figured I would just call myself out on it at the start.  A dream come true and a bucket list check for me happened on September 29th, 2019.  Being in the photo pit to cover Shinedown has always been on my list, but I am sure I am not the only photographer that would attest to that statement.

For those who have never attended a Shinedown concert before there is no way for me to prepare you accurately for how freaking amazing the show and experience will be.  However, I can tell you this, prepare yourself for every bell and whistle from Pyro, Fireworks, Smoke Machines, Laser lights, and strobes mixed with 18 years with of amazing jam pack hits.

Shinedown took the stage to a sold-out crowd of 8000 screaming fans at the Huntington Center in Toledo Ohio during the Attention Attention Tour, to opening song Devil.  A loud explosion and the large floor to ceiling white linen dropped to the floor and there appeared the members of Shinedown. Brent Smith wearing a burgundy plaid sports jacket and tie with Black tight jeans, shortly after a few belted words the pyro shot out from the flanking sides in the back of the stage and continued to the prominent drumbeats of the song.  Pure perfection in the timing of how everything was choreographed.

I can only imagine how difficult it is for a band that has been together this long to arrange a set to play to appeal to all the fans, wrap all the hits but still cover new material in a set that last for 1.5 hours.  Brent manages to soulfully sing every lyric, crisp and clean from beginning to end.  The heart and soul that is poured into each song and performance is well thought out, where he should be standing, who from the band is interacting with him.  He makes his rounds many times on the stage up and around the circular ramp, cross stage to each corner and of course front in center.

Zach Myers and Eric Bass made sure to switch sides of the stage frequently playing up to the crowd, including multiple guitar changes, jumps, and even climbing on railings to play to the sides of the arenas.  A complete treat was seeing both Zach and Eric take turns playing piano on different songs.  The rarity was seeing Zach actually play piano, and what a treat it was, whilethey performed Misfits.  It was the first time I ever seen them play it live and it was purely remarkable.

It is rare to be able to see a drummer so vividly, but how the drums and cymbals were positioned around Barry Kerch made him look like a Greek god sitting perched on the large circular ramp. I feel as if most people in the entire venue were most likely able to see a clear view of him playing his sole out, dreads swinging and sticks pounding.

Before starting to sing Enemies Brent took the time to talk to the crowd about how important it is to love everyone around you in the world, there is no room for hate.  He encouraged fans to shake hands of their neighbors and then bent over and shook my hand in the photo pit and thanked me for being a part of the day.  To say the least it made me feel as if I was going to pass out but I quickly bounced back realizing that I still had a job to do and photograph and cover the concert.  (Fan girl moment sorry).

As if many of the Shinedown songs aren’t emotional enough, getting to share an emotional uplifting moment with a room full of 8000 people and the members of the band was unreal.  Brent opens up and tells everyone let me give you all a gift that you all can feel.  He proceeds to talk about hope, despair, depression, anxiety and the troubles in the world and how no one is alone that we all have someone who cares.  It was a beautiful gift that was given to all of us right before they started to sing Get up.

I am sad to say we were not approved to cover Papa Roach for this review.  I am sure it was due to a late request on my part to cover this event.  It was definitely my loss in this situation as I’d love to brag to you about how amazing their performance was, hopefully I’ll be able to share the experience with all the viewers at a later concert.

This was my first time seeing Asking Alexandria.  I have been a fan of their music for a while now but never had the opportunity to see them until now.  They did not disappoint.  They opened their set with The Violence, it included a cool back drop for the new released single. I’ve already been a fan of the song before seeing it live, but live made the song 10x better.  However, they experienced a small technical difficulty at the end of the song, but thanks to the quick comedic response from Ben Bruce (Back up Vocals/guitarist) and lead singer Danny Worsnop and they continued to entertain the crowd and moved forward to the rest of the set.  I was pleasantly excited by the three levels of multiple smoke machines that were all over the stage and used heavily for 3 of the songs during the set.  It is definitely a plus when a band sounds exactly like their recorded music and can get up and give a solid rock performance on stage and that is exactly what you can expect from Asking Alexandria.  Their set included Into the Fire, Where Did It Go?, The Death of Me, Vultures, Moving On, When the Lights Come On and Alone in a Room.

I was excited when I learned that Savage After Midnight was the opening band.  I have had the pleasure of seeing them perform live eight times now.  This however was my first time seeing them play in a large arena.  The energy that Savage brings on stage is top notch, comparable to the larger bigger bands in that sense.  With limited room on stage they still managed to include a fully packed energized set.  Shi Eubanks(Lead singer) turns almost Savage as he rocks his body and pounds his fist on stage completely interacting with fans.  Jeremiah Lipscomb (Guitarist) and Landon Fox (Bassist) entertain fans with tuns of jumps and running around the stage,  James Thomas (vocalist/DJ) handles back up lyrics but comes out from behind his keyboard and pumps up the crowd getting them prepped for a rocking show, and Derek Bjornson (drummer) even climbs up on his stool before the show starts and puts on a small dance show, singling out screaming fans by pointing at them with his drum sticks.   A nice addition to the large arena stage was a small stair case with SAM logo that raised Shi up and additional 5-6ft placing him almost in the illusion of the hands of the Savage Doll pictured on the backdrop.  If you haven’t caught one of their shows they are a band to put on your list and catch.  Their set list included: Unleash, King, You Oughta Know, Overrated, and 10 feet tall. 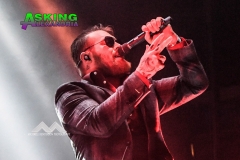 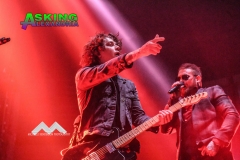 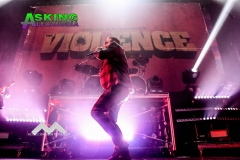 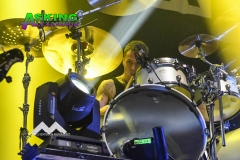 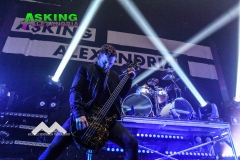 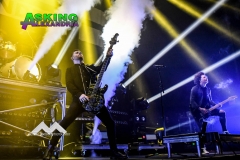 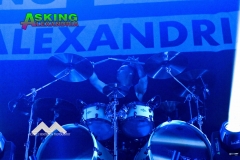 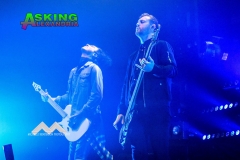 Photos and Review By: Michalle Henderson