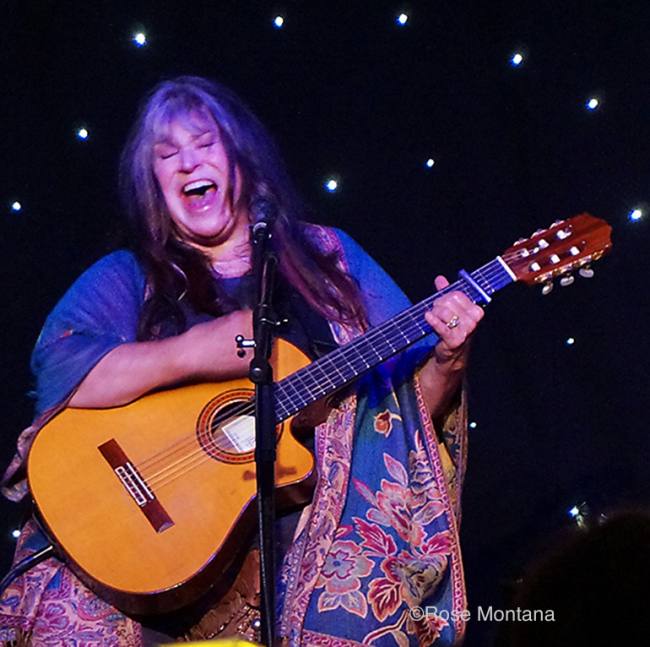 Throughout the performance Melanie’s presence and bright spirit could be felt in the crowded room. Sprinkled with stories painting the imagination, the audience was enthralled hearing her powerful voice and both her familiar and new songs.
In a private interview before the show, Melanie told of her early experiences.

Melanie performed on the Jersey Shore with her mother Polly at The Quay (pronounced key) in Seabright when she was only sixteen years old. Being underage for the venue, during breaks Melanie hid in the bathroom. Already a songwriter, Melanie was uncomfortably seated on a barstool with her guitar singing a few of her own songs and covering those she looked up to including Joan Baez, Pete Seeger, Ewan MacColland Jean Ritchie. For four sets a night, the pay was $20.

Originally called “An Aquarian Expedition: 3 Days of Peace & Music” Melanie was encouraged by her husband Pater to perform at the now legendary 1969 event held at Max Yasgur’s 600 acre dairy farm near White Lake in Bethel, NY about 40 miles outside of Woodstock, NY. With the mountain country setting, a 22 year old Melanie envisioned a picnic.

During the year of planning this “picnic” Melanie was working on a movie score in England with producer John Cameron.

Festivals were new and became Melanie thought it was just a small concert, she thought about skipping it and staying in England to finish work on the movie score.

With no manager, promoter, agent, or helper, Melanie left England for the event. Because of traffic and misdirection, a helicopter was sent to transport Melanie. While flying, Melanie saw a colorful ground beneath her and asked the pilot what crop was growing there. He responded telling her it was people. She now says it was a sea of beautiful people. Asking where the stage was, he pointed to an area as large as a football field. She tells me she thought, “I’m going to die here.” Over 400,000 were in attendance.

While her song, “Beautiful People” had been played underground radio in Europe on pirate stations, Melanie felt she was not recognizable. She recalled a VIP tent with Sly Stone and Janice Joplin, but chose a smaller tent with a dirt floor because she didn’t think anyone would know her. From her spot , she recognized a voice she knew well from the Greenwich Village days. It was Richie Havens on stage singing, “Freedom.”

Melanie began to developed a cough. From the VIP tent Joan Baez heard her coughing and sent over a pot of tea with lemon and honey. Joan Baez was her favorite singer-songwriter and this gave provided a warm fuzzy feeling until the tea was gone. Then panic!

Night came and it was raining. Melanie thought everyone would go home and didn’t know that they would stay and it would become what it did.

Melanie recalls feeling as if her body left her body and she was watching her body. It was an out of body experience and a spiritual experience in front of 500,000 people. Because of darkness, concert people had begun to give out candles and they started at the top of a hill and as the candles got passed down the hill and lit Melanie saw this flickering in front of her come to life slowly down the hill.

She wrote “Lay Down (Candles in the Rain) for that moment in time. Melanie compares Woodstock and a spiritual, generational awakening reminding her of the scene from “Close Encounters of the Third Kind” when Richard Dreyfuss is recalling something in his past and molding it out of mashed potatoes. Melanie said, “Woodstock is a is a living thing and it is still alive. That day I was given a great gift of knowing who I was. I take this experience with me wherever I go. It will never leave me. The  moment will never fade.”

Before this day, the largest crowd Melanie performed for was 500 people in Philadelphia, PA. In Philly, Beautiful People buttons were handed out by promoters.  Now she would become known as the reason people hold up lighted objects at the end of concerts.

Melanie will appear at the Red Bank Oysterfest, Red Bank, NJ on Sunday, September 30, 2018. Details can be found on http://www.rueevents.com/

Melanie has performed professionally since 1967 and is best known for her hits “Brand New Key” , “Ruby Tuesday“, “What Have They Done to My Song Ma“, and her song about performing at the 1969 Woodstock Music Festival, “Lay Down (Candles in the Rain)“. Currently on tour, her new  release is a double CD “Center Stage at Central Park” recorded in 1974. Melanie’s McLoone’s show was produced by http://www.rueevents.com/
[Show slideshow] 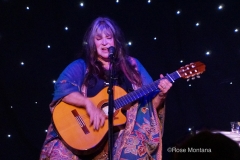 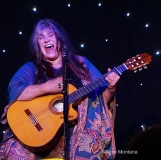 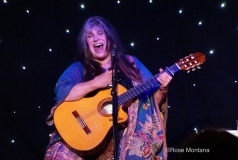 Photos and Review/Interview by Rose A. Montana