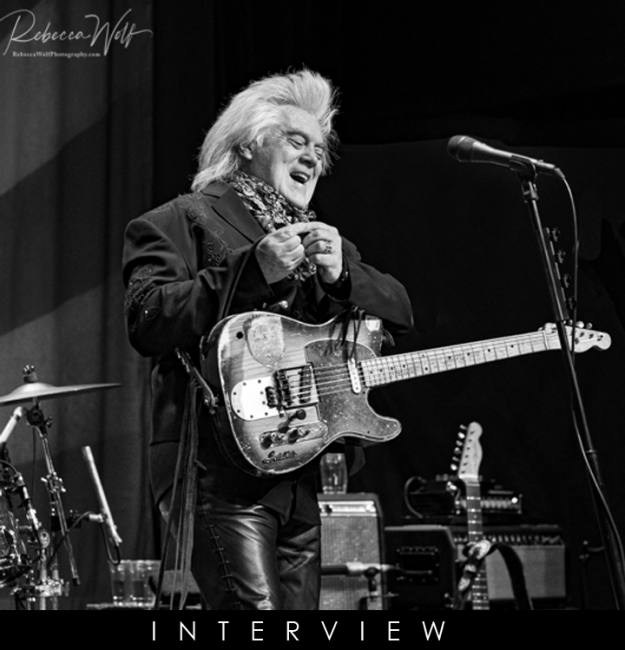 Marty Stuart is a country music singer, songwriter and musician. In his early teenage years, Stuart began playing in the bands of country legends, before launching his own successful solo career. Stuart has recorded over 20 studio albums, has had over 30 songs on the Billboard Hot Country Songs charts, has won 5 Grammy Awards and was recently inducted into the Country Music Hall of Fame. For the past 20 years, Stuart has been playing with his band, Marty Stuart & His Fabulous Superlatives. The band continues to tour throughout the US and I had the good fortune to speak with Marty Stuart prior to his recent show in Newton, NJ.

Interview and photo by Rebecca Wolf.
Click here to see photos and review of Marty Stuart & His Fabulous Superlatives performing.

Marty Stuart: I feel like traditional country music has to step it up and fight right now because it’s probably the least regarded inside the country music industry. It’s probably the faintest voice out there. It comes and goes in cycles.  Sometimes it’s 10 years, sometimes it’s 20 years.  What would bring country music back faster than anything else would be a good looking 20-year-old kid who sings a country song that’s a big hit, that’s gargantuan.  Then, all of a sudden, the industry would follow that for another 10 more years. That’s just how it works. But, regardless whether that happens or not, traditional country music is the bedrock of the culture. It’s the empowering force. It’s the timeless zone and it really doesn’t depend on whether anybody is paying attention to it or not because it’s always going to be there.  There’s enough story up under it now that it gives country music its long-lasting credibility. It’s beyond numbers; it’s beyond trend; so, it’s here to stay and it’s just a matter of if the audience comes, then that’s just how it is, the fickle part of the culture. That’s ok. Traditional country music is here to stay.

RW:  There’s a lot of music now that’s called country rock, southern rock and Americana.  Do you see those genres as offshoots of country music?

MS: I do. Well, in the grander scheme of things, in the American Songbook, there’s blues, and rock and roll and jazz and it’s all kind of embedded down there, but I think country music has inspired a lot of other branches of cultures or niches and filled them up with music. Country music has broad shoulders…it could do that.

RW:  For me it’s a bit nebulous when something says country rock or southern rock or Americana. Do you see them as different?

MS: I don’t know. I’m with you. It’s either listenable or not.

RW:  Do you feel in this era musical genres cross more lines and are less defined than they used to be and that things are more kind of mixed than in the past?

MS: I do and I think it’s a marketing thing more than anything.  If you just turn on SiriusXM there seems to be a strand and a sliver of music for everybody.  If you like the light side of jazz or traditional jazz or if you like country gospel or whatever. There seems to be a sliver in there for everybody so you don’t have to compromise who and what you are and what you believe in and what you like. I guess that’s good. We used to have to go to one record store to get what we wanted to listen to. Now we have a record store on the radio that serves everybody and I think …I miss the camaraderie of the other. We kind of isolate; audiences are more isolated. I guess that’s what I am trying to say.

RW:  Do you feel artists are more willing to collaborate with different genres than in the past?

RW:  I know you talk about your love for traditional country music but your music has lots of flavors of other genres, like rock or gospel. Do you feel your early exposure to so many different genres brings lots of flavors to your music?

MS: I do. Back to my home state of Mississippi…. When you drive across the state line it says,  “Welcome to the birthplace of America’s music” and that could be backed up.  But really it goes back to my hometown radio station. They signed on playing country music in the morning and at noon they played southern gospel and afternoon was rock and roll and top 40, and late afternoon was jazz and easy listening and they signed off with classical music. I thought everybody’s radio station was like that. So, that kind of informed me. Above and beyond all that it was the country music portion that got my heart and that’s what I loved the most. But, I heard all of those other things alongside country music and they probably followed me into my musical life.

RW:  So, with The Songs I Sing in the Dark project, was it challenging to pare down to the 20 songs that you ended up picking?

MS: That was a pandemic project since the band wasn’t able to play.  I had that title in my mind for a long time. It was kind of a rescue mission for some forgotten songs, overlooked songs, or songs I just loved, songs that we had in the set list for years. So, that was the reason to do something while the band couldn’t play.  There were 20 songs and yeah, I could keep going and probably turn it into 100 songs before it’s over. The Superlatives have a cosmic cowboy kinda record called Altitude ready to go, an original 20-song instrumental record and then Songs I Sing in the Dark. So, I think Altitude will be the first one up and we will see where it goes from there.

RW:  Do you feel differently connected when you’re recording covers vs songs written by a songwriter vs song you’ve written for an album?

MS: I prefer to record songs I’ve written. I love writing but when I do step up and do something that is a cover I think the first and foremost thing is to unlock the song and find a way to personalize it. There’s really no reason to record a song and just follow the dots and do what’s always been done. It’s harder to cover songs unless you can personalize them. That’s a challenge.

RW:  In that vein, for Songs I Sing in the Dark you did the Tom Petty & the Heartbreakers’ “Fault Lines,” and it’s a rock song. Does it automatically translate in your head to a country song or does it evolve into a country song as you are playing it?

MS: I think it evolves. The night before I recorded “Fault Lines” I called Mike Campbell, Tom’s guitar player. There was a chord in there I could not figure out so I had a guitar lesson on the phone.  Campbell and I were laughing and he said, ‘That’s why we never played the song because we could never make that chord.’  On the way to the studio the next day I went, “I wonder how it would sound if I played it on the mandolin?” So, it was just a make it up on the spot thing and I recorded that song one time and what you hear is what happened. I’ve been a part of enough recordings to know when something has it and when something doesn’t but that one kind of had it.

MS: I never know when songs are going to come out of the air. I like having a destination for songs. When I did my TV show I had a destination for songs. If I needed a particular kind of song I knew if I could find the time to sit down and write it I had a place to play it. The same with making records. I love writing just to write but I also love having a destination. Honestly, you’re a writer, you know what I’m talking about. A deadline helps sometimes.

RW:  I definitely agree. When you have something, you have to get out you definitely are motivated. I’m very inspired that you’re a photographer. Are there specific subjects you like to photograph or just life as you are experiencing it.

MS: Pretty much life. My mother is a great photographer. She’s my favorite photographer. Cameras were always around. When I was 14 years old, on my first trip to NYC, I discovered the work of a jazz bass player named Milt Hinton. He seemed to have his bass in one hand and his camera in the other hand. What I saw in his work was he had total access as an insider into the family of jazz. He had scenes he photographed that a commercial photographer could never get into. It dawned on me while I was looking at his work that I had the same access that he has but in the world of country music. So, I called my mother and asked her to send me a camera and I proceeded to take pictures of the world of country music. That was always my greatest inspiration, to document the world around me. Back in the early 70s nobody seemed to have a camera out on the road or at recording sessions. Now everybody takes pictures on their phones but then it was not like that.

RW:  Yes, having access at concerts means everything. It’s different from having a phone.

MS: Yeah, that’s right. You know, I didn’t say I was a great photographer because it’s really my hobby but with some of the subjects I’ve had in front of my camera, I’ve thought, ‘If you can just get this in focus you’d have a profound shot.’

RW:  Are there still musicians you’d like to collaborate with that you haven’t had the opportunity?

MS: No. I’ve pretty much checked it all off!