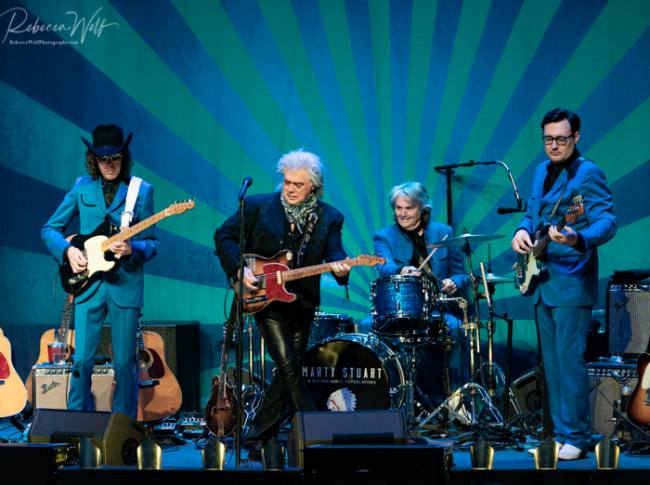 You can see InFocusVision interview with Marty Stuart here!

It was a bitter cold day on Saturday January 29th and much of the Northeast had just been blanketed in a heavy layer of snow. However, luckily much of North Jersey was spared from these blizzard conditions, allowing Marty Stuart & His Fabulous Superlatives to roll into Newtown, NJ to perform at The Newton Theatre. One might think having a few inches of snow might deter some fans from venturing outdoors, especially those who may no longer be as confident drivers. However, from the looks inside the crowded theater that night these were diehard Marty Stuart fans and nothing was going to derail them from a show they’d been waiting to see since prior to the pandemic. Then again, New Jerseyans are tough; we don’t let much stand in the way of reaching where we are going or getting what we want!

Country music, once considered belonging to the Southern regions of the US, has exponentially spread its reach in the past two decades, and has become a significant part of mainstream America, be it in the North, South, East or West. Although country music will always have its roots in the traditional country artists and the traditional country sound, over time there have been new artists who’ve led the genre down a slightly different path and deviated from the traditional sound.  While this may have altered the original parameters of country music, it feels (to me) that these new paths have broadened the scope of country music and expanded the genre. In doing so, this has introduced the genre to a greater audience and brought more fans into the fold. Once in the fold, there’s often interest in looking back at the past and learning about the original foundation, which helps keep the traditional music alive.

As the sound and feel of current country music has changed, there appears be an increased connection between this “new country music” and the sub genres of country rock, roots rock, Southern rock, and Americana. For decades, these sub genres, blends of country, rock, folk, blues, and bluegrass, seemed more of an off-shoot of rock music. However, now the clear boundaries between country and these sub genres have  loosened. Throughout the music industry, with most music, it appears the blending of genres is occurring to a larger extent than in prior generations. This may possibly be related to the greater accessibility of a wider range of music through a variety of platforms. With this accessibility, individuals of all ages are now able to easily experiment with music they may never would’ve considered opening their minds too.

It’s this accessibility that recently led me down the road to discovering a number of new artists, in genres I previously had limited familiarity with. One of these artists was Marty Stuart. Having encountered Marty Stuart & His Fabulous Superlatives at a festival in Philadelphia a few years ago. I was intrigued by his appearance, passion for his music and beautifully warm, rich voice, regardless of the genre of music he was performing. I was taken in by “this” musician (whose name I didn’t know at the time) and vowed to see him perform and photograph him again.

Marty Stuart has been on the road playing music since hitting his teenage years. He’s performed and recorded with country music legends, released solo albums, and continues to record with his band Marty Stuart & His Superlatives, including Kenny Vaughn on guitar, Harry Stinton on drums, and Chris Scruggs on bass. Stuart’s vast catalog includes traditional country songs, as well as ones with hints of rock, blues, bluegrass and gospel. As great as Stuart’s music is to sit and listen to at home, in your car, or on a mobile device, hearing Stuart perform live takes his music to a whole different level. Fast forward a few years from my introduction to Marty Stuart, and I was again lucky enough to experience Stuart and his band again on the snowy night of January 29th.  Maybe it was the sound and feel of the live vocals and instruments wafting through the open space of the theater; maybe it was Stuart’s thrill for performing and stage presence that amplified the spirit of the music; maybe it was a combination of these factors. Whatever the reason, being present for a Marty Stuart & His Superlatives performance was more engaging, entertaining, and energizing than I even expected.

The evening’s set list included hits from Stuart’s solo career, songs from his musical collaborations, covers from Stuart’s favorite country musicians, and numbers from his recordings with The Superlatives. Energetic numbers, included fan favorites “Hillbilly Rock,” which hit #8 in 1990 on the Billboard Hot Country Singles & Tracks chart and “The Whiskey Ain’t Workin’” (recorded with Travis Tritt) which won the Grammy for Best Country Collaboration with Vocals in 1992.  Additional favorites included, “Matches,” a perfect vehicle for displaying Stuart’s warm, rich country vocals, accompanied by the deep twangs of the strings on Scruggs’ double bass, as well as “Tempted,” which reached #5 in 1991 on the Billboard Hot Country Song charts. Scruggs further demonstrated his musical fortitude while singing a classic Bob Wills’ blues number.  Although often appearing subdued on stage, while showcasing his melodic, bluesy voice, Scrugg was spirited, energetic and obviously enjoyed singing and playing the bass.

With his black cowboy hat, sunglasses, aqua blue suit and stoic facial expression, “Cousin” Kenny Vaughn, appeared to be a unique, unflappable presence on stage. However, when “Cousin” Kenny stepped up to the microphone to sing lead and jam on his guitar, an air of fun and lightness overtook him and his personality came alive. The Superlatives not only have a guitarist and a bass player who are vocalists. Their drummer is a multi-instrumentalist, with a tremendous country voice. “Handsome” Harry, singing Woody Guthrie’s “Pretty Boy Floyd,” displayed a strong, smooth tone and an incredible ability to hold a note, with his lung power on  “Oklahoooooooo……..ma,” bringing astonished applause from the crowd. Additionally impressive was Stinton’s so-called “costume change,” as he removed the snare drum from around his neck, strapped on an acoustic guitar, and began to play alongside Stuart, while singing the beautiful, folksy “Ballad of Easy Rider.”

Enthusiastically speaking with the crowd, Marty noted, “Country music has created many bonafide folk heroes and Willie Nelson is one of them. I love Willy. He inspires me.” “He should be on Mt. Rushmore!” came a shout from the crowd. With a broad smile and a gleam in his eyes Stuart responded, “Damn right he should be on Mt. Rushmore!” Singing Nelson’s “Me and Paul,” Stuart’s voice had a deep, warm, texture, mixed with the right amount of country rumble. As the beautiful melancholy instrumental passages began to trail off, and the instruments become quieter and quieter, the air in the theater became completely still; you could hear a pin drop, as the crowd was drawn to hearing every last note. It was as if Marty Stuart had his audience under a country music spell.

From additional instrumental numbers, the Western-influenced “Mojave,” to the Southern-touched “Alabama Jubilee,” to Stuart’s new, energetic, rock-infused number, “Sitting Alone”, debuted that night, to the evening’s appropriate final number, Cody Jinks’ “Ready for the Times to Get Better,” every song and verbal interaction grabbed the full attention of all present.  This is not surprising, once you’ve witnessed firsthand Stuart’s stage presence, his joy for creating country music and his incredible desire to share this love with his audience. After three encore songs, the evening came to an end. Speaking to the crowd Stuart expressed,“I meant it that it’s an honor to be here. When we left the road it was for a year and a half. Then last June we came back on the road. That first time back on stage I told myself, ‘I will never take this for granted again!’ Maybe the next time there won’t be snow on the ground and we will stay for two nights!” As Stuart proudly exited the stage, shouting the words, “I love you very much!” the crowd’s enormous cheers gave testament to the love shining back on Stuart that night. Hopefully, bright enough to keep him warm as he existed into the 8 degree night. 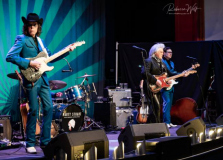 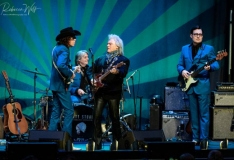 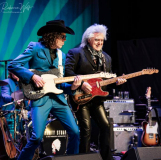 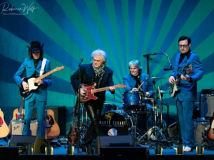 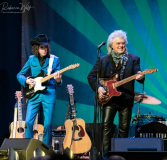