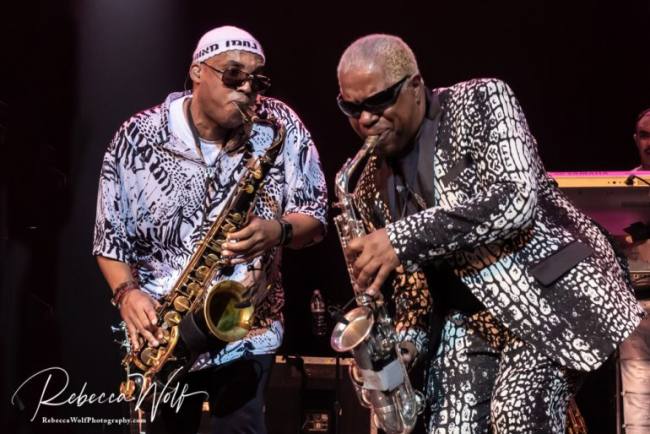 With about 10 musicians on stage, all singing, dancing and playing musical instruments, this group could definitely be described as a gang. However, this is no ordinary gang, nor a gang looking to cause havoc.  This is a gang aiming to spread joy and harmony, to bring people to their feet and songs to their lips. This gang is Kool & The Gang. This year marks 50 years since the creation of Kool & The Gang, and after a half century the band (mostly not original members) continues to radiate energy and spirit, and sounds phenomenal while doing so.

At the St. George Theater on February 15th, founding band members, Robert “Kool” Bell and Dennis “DT” Thomas, were joined on stage by a gang of musicians. Some have been with the band for 20, 30 and 40 years, while others joined the fold in the past decade. However, working as a collaborative effort, there was an abundance of positive communication and shared passion between all members. Equally as evident, was the level of respect towards “founding fathers” Bell and Thomas, which was observed on lead singer Shawn McQuiller’s face, when introducing the two to the cheering crowd. Moving about the stage with his bass guitar, Bell’s wide smile throughout the performance appeared to be enjoyment for playing the music, as well as pride in having created this musical legacy. While Thomas did not remain on stage for the entire show, each time he joined to showcase his amazing talents on the alto saxophone his bandmates were enthused by his presence. Most excited in the gang was his fellow alto sax player, who was beyond thrilled to jam with Thomas at each opportunity.

Trumpet player Michael Ray, in the band since 1979, is the longest non-original member in Kool & The Gang. The sparkles in his shirt matched his radiating smile, as he exuded pure joy while playing his instrument.  Lead singer McQuiller, in the gang since 1991, manned the helm, with his strong stage presence and fabulous voice. Newest and youngest band member (since 2016), Walt Anderson is the second lead singer. Anderson’s charm was as apparent as his gorgeous voice , as he came to the edge of the stage to sing to the audience and dance along with adoring fans in the front rows. While the band members sang and played their instruments, they danced in unison throughout the evening. Before the night was through, the packed house was on their feet, singing ,dancing, joining in the “Celebration”, having a “Ladies Night”, enjoying the opportunity to “Get Down On It” and definitely feeling thrilled to “Cherish” a gang as great as Kool & The Gang. 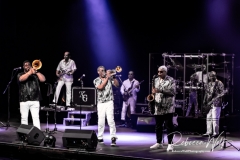 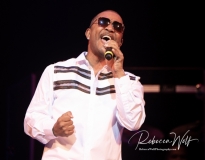 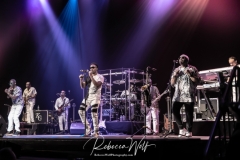 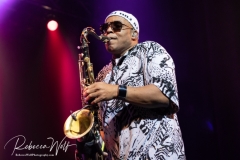 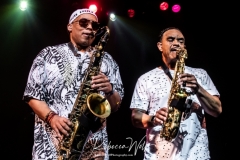 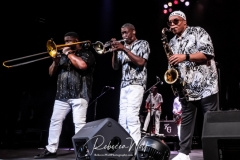 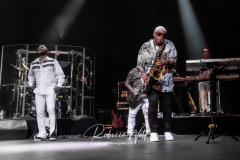 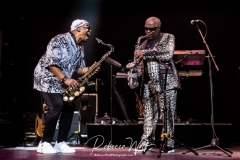 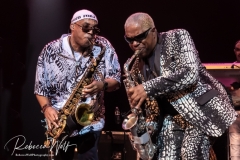