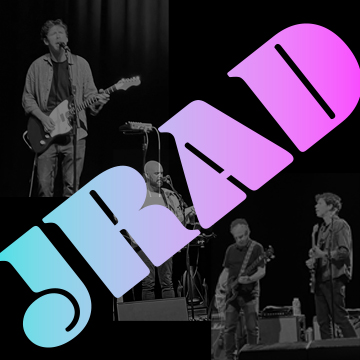 The big man is smiling somewhere.  At least that’s what I choose to believe.  Nearly 30 years following the passing of Jerry Garcia, there are still a profusion of triumphant celebrations of these songs that he helped bring to life.  The local and regional acts that play at the corner watering holes bring smiles to a multitude of communities.  Dead & Company and Phil & Friends have played consistently throughout the years. Dead and Company is a tight knit unit that still soars. Yeah.  That 2007 Rolling Stone cover with Derek Trucks, John Frusciante and John Mayer pretty much nailed it on all three fronts.  Phil weaves in an assortment of elite musicians at each show.  The Q still ranks #1 as my personal favorite post Jerry incarnation.  Dark Star Orchestra recreates specific Dead shows from the past and do it with vigor and joy.

That age old adage about there is nothing like a Grateful Dead show applies to Joe Russo’s Almost Dead.

Joe Russo, played with Bob Weir and Phil Lesh of the Grateful Dead in Further, one of the post Jerry manifestations. He has been involved with many exploratory musical projects including Fat Mama which was an ethereal jazz/fusion band that would leave audiences wondering what the hell that had just witnessed. While playing with Further, Russo was involved in a project known as Bustle in Your Hedgerow, a Led Zeppelin instrumental band.  Scott Metzger (Guitar), Marco Benevetto (Keys) and Dave Dreiwitz (Ween bassist) were all involved with this enterprise.  In early 2013, at a party in NYC, the organizer was looking for something a bit different, phone calls were made, Tom Hamilton joined the fray as another guitar player and JRAD was born.

JRAD is comprised of monstrous musicians.

Was it in Fear & Loathing where Hunter Thompson gnawed on an adrenal gland?  Well, JRAD takes these wonderfully crafted songs and injects them with a sizable dose of adrenaline.

If you are inclined to shake your bones at shows, you best be careful because you may break an ankle keeping up with the tempo that JRAD lays down.  You can catch the band nodding and smiling at each other when they know they just seamlessly pulled off a difficult segue during a song or going from one song to another.  Anyone familiar with jambands knows that the > symbol indicates one song that bleeds into the next.  JRAD leads the league in >.  There was one pause at the Boston show and that was deep into the 2nd set.

Leader Bank Pavilion is a beautiful amphitheater on the water in Boston. A comfortable 5,000 seat venue that sells Ben & Jerry’s Ice Cream and Dels Lemonade.  If you don’t know about Dels, you need to check out this frozen cup of goodness.  It was a perfect summer night. Strolling on stage at 7:15PM, the band took off with an opening jam that led into Foolish Heart.  Hamilton delivered an elegant solo and handled lead vocals.  Hamilton handles the vocals on Jerry tunes, while Scott Metzger takes care of the Bobby songs. This led into a funky/swampy Minglewood Blues.  This had an edge to it and at one point Dreiwitz’s bass playing could be felt up in Gloucester.  Smoothly drifting from the intense Minglewood into a penetrating rendition of Birdsong.  This expansive musical journey led into a feverish, hard hitting version of the classic Black Throated Wind. “You ain’t gonna learn what you don’t wanna know”. Russo set the pace and drove the band to seek new territory.  If I was starting a Rock n Roll band, any type of Rock N Roll band, my first call would be to Joe Russo.  He is the embodiment of drumming perfection. Following the frantic pace of Black Throated Wind, the band eased into fan favorite Scarlet>Fire to close the first set.  An hour and ten minutes of auditory goosebumps.

Following a short break, the band reappeared with Lost Sailor>Saint of Circumstance.  This is where Metzger would set the tone for the 2nd set.  His soaring guitar work would lay the groundwork for the band to transition into the Pink Floyd song Echoes.  Echoes reckoned back to Fat Mama as it was jazzy and progressive with Marco Benevetto at the forefront of driving this cosmic bus.  I’m guessing all musicians enjoy exploring sounds, but Benevetto seems to thrive on it and can never stop attempting new methods to provide audiences with different vibrations.  Without taking a breath the band went from the progressive Echoes into the Dead classic Terrapin Station.  Wow!  I would be hard pressed to find a better version of this song.  Hard hitting. Heavy.  The band took this into expansive territory.  Russo was relentless. That’s the exact moment where JRAD went completely off whatever playbook may have existed. Terrapin>Throwing Stones.  When you thought they would settle with that combination, Throwing Stones suddenly emerged as the Allman Brothers instrumental classic Jessica.  I guess that would be coined JRABB. Jessica took a circuitous route back to a grunge tinged finish to Throwing Stones.  Metzger was fierce during this second set closer. The entire night, at different moments, there was a woman holding up a sign from the 5th row that simply said Ramble on Rose.  She got her wish for the encore. A perfect ending to a magnificent night of music.  The crowd singing along to the revered lyrics and smiling along with the band.

JRAD is not to be missed.  They honor these masterfully crafted songs in a manner that simply shakes you in the right places.