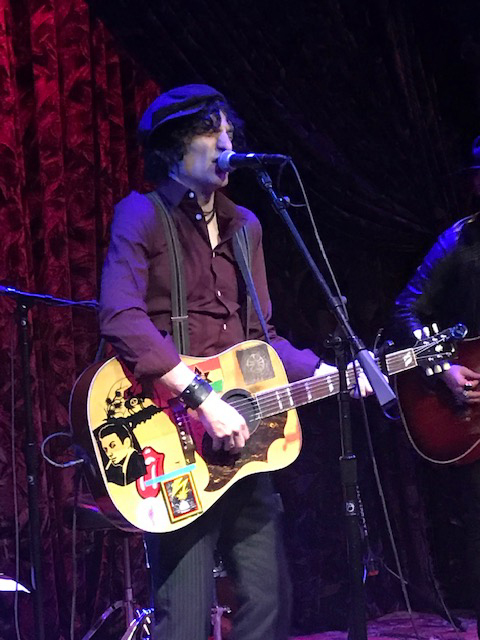 With a new album release announced for August the same day as the show, Jesse took the small stage at the Analog (at The Hutton Hotel, Nashville) Tuesday night.  The room is geared towards listening to music. Plush couches and seats right up to the stage surround the room and a large chandelier hangs above. It was a perfect intimate venue for the southern debut of these personal songs.

Accompanied by only a guitarist, Jesse played stripped down versions of some older material. “Wendy” & “Black Haired Girl” sounded fresh in this setting.  Jesse rocked the crowd and played the natural story teller, talking about NYC, punk rock, Elton John and… his babysitter as a kid.

The new material seems more soul searching than his past music.  The song “Shine Down”  was a true standout.  Jesse told the crowd a story of working with Lucinda Williams, the producer on this album, and having gone to see her play at the famed Hollywood Bowl while she was on tour with Tom Petty.  He had seen Petty before as a younger man, and well, just wasn’t that impressed.  But this time – he was blown away.  A week later, Tom Petty passed away unexpectedly.  The Las Vegas shootings were the same day.  And Jesse was visiting his father who was also ill.  “Shine Down” is about being present with those around you, how life is short, those memories precious.  It was a haunting, touching song.

Other new songs “Revelations” and “Room 13” (on the album sung with Lucinda Williams) were also revealing about Jesse’s direction.
Nashville hasn’t heard the last of Jesse Malin!

Review and Photo by Lori Smith