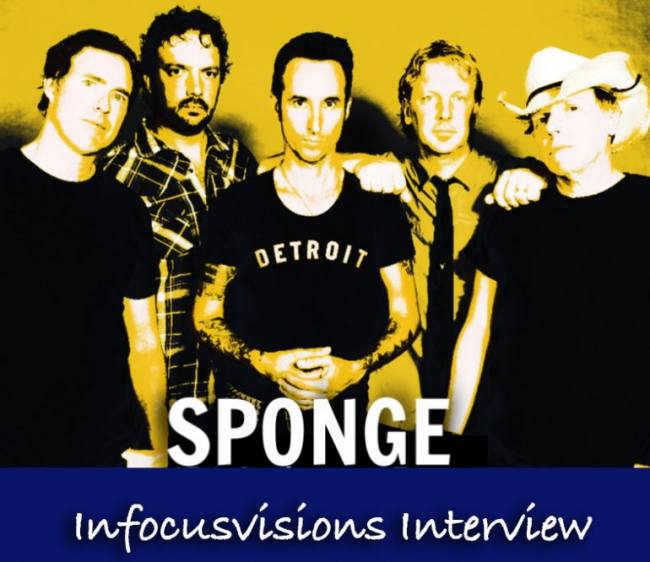 I had the pleasure of speaking with veteran alternative rock band Sponge frontman/founder and lead vocalist Vinnie Dombroski, ahead of the band’s performance on Thursday evening at one of the most iconic New Jersey live music venues, The Stanhope House. Sponge has performed at the Sussex County roadhouse three times to date as Dombroski had heaps of praise for a house manager named Jesse for “always taking care of the band and making us feel welcome.” Dombroski enthusiastically noted that the band is “really looking forward to this show because it’s a chance for us to perform in an intimate setting”.

Sponge is currently on a 13-stop tour that began last week in Coldwater,
Michigan as the band took to the road via tour bus and trailer for their north to south route that ends mid-July at the Big Kahuna Music Fest in
Providence, Rhode Island.

As veterans of the 90s era music scene, where the absence of cell phones
and social media during that time was the norm, the band continues to best
connect with fans at Merch tables after shows, shaking hands and meeting
people face to face. Dombroski also noted that “modern technology and
Facebook Live is also a valuable tool for bringing the band closer to reaching more people worldwide.”

The five-member band, hailing from Detroit, Michigan released their eighth
studio album, “The Beer Sessions” in 2016 at the annual Detroit Music
Awards. An occasion which saw the original lineup of Vinnie Dombroski, Tim Cross, Jimmy Paluzzi, Mike Cross, and Joey Mazzola reunited for one night only. This was the first time in 24 years that all of the original Sponge
members shared the stage.

When asked about where the idea for the LP title came from, Dombroski
fondly reminisced how “a friend who was a master brewmaster expressed
interest in sitting in and observing the creative process that went into
producing a music track. He brought along a sampling of beers for everyone to enjoy and a camera crew was invited to document the session as well.”

The experience was so positive that the band invited several more
brewmasters to join them in the studio (and bring their beers to sample) as
six of the nine tracks on the album were produced in this manner.

Dombroski candidly discussed the early days of growing up in the Motor City. A time when blues and jazz clubs permeated the urban landscape, giving Detroit’s inhabitants a deep appreciation for both the Blues and Motown sound. Both he and fellow band members were fortunate enough to be able to attend shows at iconic St. Andrew’s Hall, and noted influential musicians that helped to shape their musical DNA: Mitch Rider, Iggy Pop, Bob Seger, The Police then punk and later, Jane’s Addiction.

When asked about how the band was able to remain successful after 30 years; continue producing records, getting radio airplay and touring,
Dombroski discussed perseverance, and the continual habit of collaborating with fellow band members outside of a label and producing records on their own terms. The songwriting is a shared responsibility that includes creative input from then-producer and current bandmate Andy Patalan (guitar) who joined the band in 2004.

As the 30-minute interview progressed, it seemed more like a conversation
between two old friends than the typical Q & A session. Dombroski was
completely at ease and had an infectious enthusiasm creating an instant
connection between us. We spoke of what he was currently listening to:
Mark Lanegan (Screaming Trees), and The Pixies. Then discussed albums
he’d bring to a deserted island; the Hank Williams boxed set, Deftones, Fear
and the Sex Pistols. He is excited to hit the road in the band’s tour bus and
trailer as well, meeting people and sharing the band’s 30-plus years of
music.