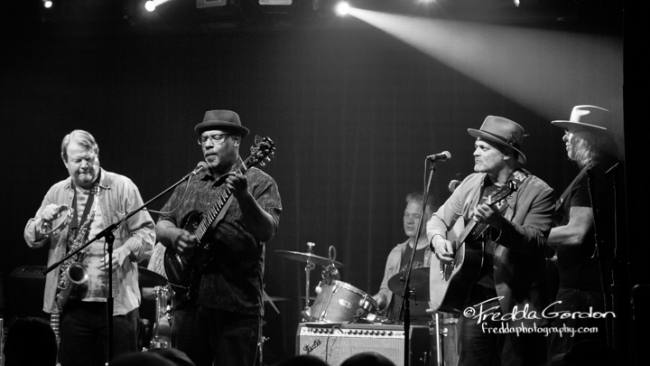 Friends of the Brothers performed last night at the Acoustic Cafe in Bridgeport, CT and it was a great show! The combination of a small venue and a crowd connected by their love of the music left the audience feeling like everyone was a friend. The evening was dedicated to “Celebrating the music of the Allman Brothers Band,” and the musicians all have some connection to the Allman Brothers Band. They were Jr. Mack (guitar, vocals), Alan Paul (guitar, vocals), Andy Aledort (guitar, vocals), Eric Finland (keys), Craig Privett (bass), Dave Diamond and Eric Kalb (drums), and Kris Jensen (sax, flute) as a guest. They played many songs including “Ain’t Wasting Time,” “Blue Sky,” “Revival,” and one of my favorites, “Melissa.”

The band is an interesting mix. Alan Paul wrote the book about the Allman Brothers. Literally. He wrote the New York Times best-seller One Way Out: The Inside History of the Allman Brothers Band. He has a lot of other high profile writing credits under his belt, and he can play and sing! Andy Aledort, another accomplished music writer, tours with Dickey Betts and has played with countless others. Eric Finland, plays in Jaimoe’s Jasssz Band, toured with Dan Akroyd’s Blues Brothers Tour with Paul Shaffer and more.

Jr. Mack is a long time performer, with a regular gig at Terra Blues in New York City. He has also been touring with Jaimoe’s Jasssz Band for many years and played with The Allman Brothers, Gov’t Mule and others. It’s not surprising as his great voice and smokin’ guitar solos make all performances special.

The band also has two heavy hitters on the drums (no pun intended). They both play with many bands, but some standouts are that Dave Diamond plays with Assembly of Dust, and Zen Tricksters and Eric Kalb’s list of bands is long too including the Allman Brothers Band. Craig Privett plays in Dave Diamonds band. Their guest, Kris Jensen has played with The Allman Brothers Band, Gregg Allman & Friends, The Dave Matthews Band, and more.

All of these musicians working together presented a strong show and a fun night! Opening for them was Atlas Gray. You can see photos of them here. 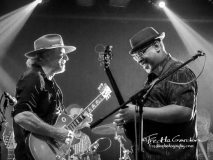 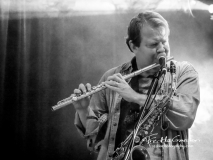 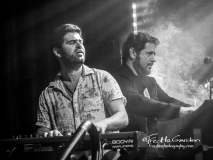