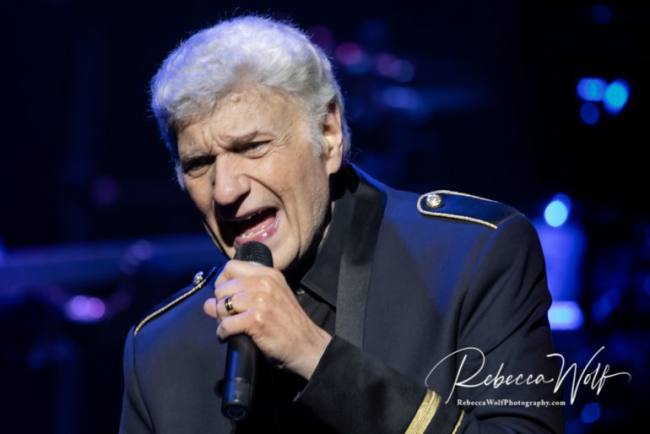 My feelings regarding the Dennis DeYoung show at the St. George Theater would be quite evident, if I expressed my first thought as DeYoung and his band members left the stage. Before even gathering my belongings to leave the theater the thought racing through my head was, “Is it possible that they have another show in this area in the near future? I need to go again!” While I was fortunate enough to have seen DeYoung and his band last spring as well, I don’t want to wait another year to experience the pure joy of hearing DeYoung’s still amazing voice, and the incredible music of Styx…..music that transports many of us who grew up during Styx’s glory days to a time and place and feelings of decades ago.

Standing on stage at the St. George Theater, Dennis DeYoung, singer-songwriter, musician and producer, a founding member, lead vocalist and keyboardist of the rock band Styx, enthusiastically questioned the crowd before him.  “Who is seeing me for the first time tonight?” As a smattering of audience members cheered, DeYoung proudly responded, “What’s taken you so long? I’m 72 years old!” bringing applause from the adoring crowd. DeYoung’s pride in the music he’s created, in his current band, in his wife of 49 years (a back-up singer for the band), as well as in his ongoing ability to perform, is clearly evident. At 72 years old DeYoung has no plans to stop, as he informed his thrilled fans that he’s in the process of recording a new album.

The sound and spirit of DeYoung and his band members felt completely authentic and true to the music of Styx.  As eager as DeYoung’s fans were to hear the music of Styx, DeYoung himself appeared as nostalgic and as appreciative fat continuing to have the opportunity to share the music that’s been part of his life for over 4 decades.  As awed as his fans that time has passed so quickly, and it’s been 40 years since releasing The Grand Illusion, DeYoung quipped, “I heard 70 is the new 50. I guess 50 feels feels pretty bad then!” While DeYoung joked about his age, the energy, spirit and musical abilities he presented belied his 72 years.  Moving across the stage from lead vocalist to keyboardist, DeYoung showcased his skills and theatrical nature, with his expressions, movements and audience banter

It was apparent that DeYoung’s energy and spirit was boosted by that of his talented bandmates. His strong connection with his two guitar players, with whom he shares the front of the stage, was clearly evident.  August Zadra, lead guitar player and singer, joined the band in 2010, after being discovered by DeYoung’s son in a Styx cover band on YouTube. DeYoung relayed to the audience his thrill at the unexpected discovery of Zadra, since DeYoung previously didn’t want to perform Styx songs sang by original band member Tommy Shaw, as DeYoung wanted Styx music to remain authentic-sounding.  Well, not only is Zadra a look-alike and sound-alike for Tommy Shaw, but Zadra demonstrated an abundance of joy and enthusiasm, as well as an obvious love and respect for the music of Styx and Dennis DeYoung.

There was a connection as well between DeYoung and Jimmy Leahey, and a camaraderie between Zadra and Leahey.  Leahey demonstrated rock star guitar skills, with his platinum hair obscuring half his face and a devilish grin. Jamming together throughout the evening, Zadra’s and Leahey’s investment in the music was evidenced by their level of engagement and passion. From keyboardist John Blasucci, to bass player and back-up vocalist Craig Carter, to drummer Michael Morales, to back-up vocalist and adoring wife Suzanne DeYoung, all of the band members demonstrated a genuine enthusiasm and apparent love for the music of Styx, and for their leader Dennis DeYoung. So, if you are looking to hear the sounds of Styx, to recall the feelings and memories of your yesteryears, and to be surrounded by the skill and spirit of an incredible band of musicians, look for the next date that Dennis DeYoung will be playing in your area….I know I already am! 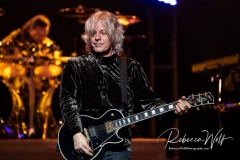 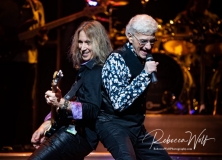 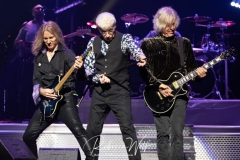 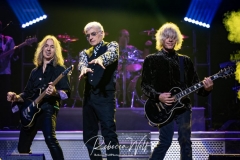 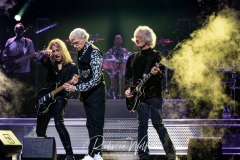 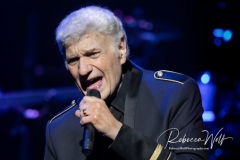 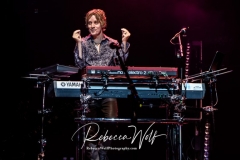 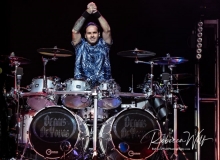 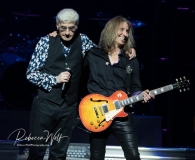 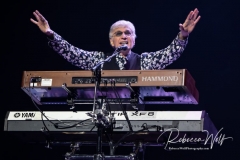