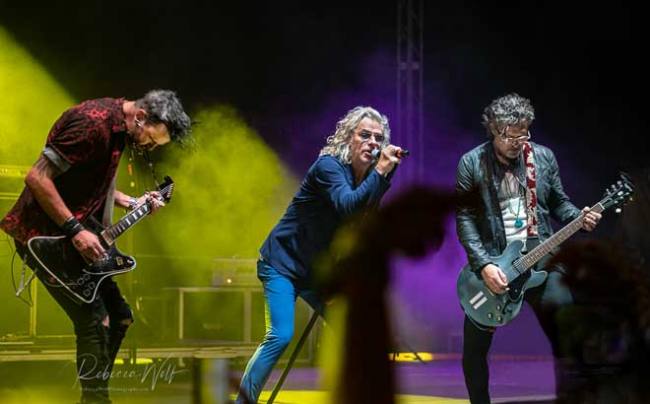 It was a hot, humid evening on July 29th at the NJ Festival of Ballooning, the opening night of a weekend slated to be filled with hot air balloons, helicopter rides, carnival games, amusement rides, mouthwatering treats and dozens of vendors. Sporadic rain droplets threatened to turn into a full-fledged storm.  With impending rain and a strong breeze, those present to witness the hot air balloon lift-off were disappointed that the balloons would remain grounded. While a few sprinkles and some wind can wreak havoc on hot air balloons, this slight weather disturbance did nothing to affect the evening’s musical performance on the festival’s main stage. The band ushering in this weekend of festivities is a band that’s energized fans with their music and live performances for almost three decades. Releasing their eleventh studio album on August 12th, this band is the chart-topping, alternative rock band, Collective Soul.

Collective Soul, originally from Stockbridge, Georgia, consists of five members, including Ed Roland, lead vocals and guitar, Dean Roland, rhythm guitar, Will Turpin, bass and backing vocals, Johnny Rabb, drums/percussion, and Jesse Triplett, lead guitar and backing vocals. The former three have been with the band since its origination, while Rabb joined in 2012 and Triplett in 2014. While only two of the five band members are actual brothers, these five musicians gel like a band of brothers from the moment they hit the stage. However, even a band of brothers generally has a leader in the pack…one who stands at the helm, takes charge, and points all in the right direction. For anyone who’s had the good fortune to see Collective Soul live, there’s no doubt that the leader in this pack is the energetic, effusive, wildly talented Ed Roland.

When Ed Roland emerged onstage at the NJ Festival of Ballooning he sent a wave of electricity directly through the crowd, igniting a spark in all present. It’s impossible not to absorb Roland’s energy and to feel those vibrations. How fitting that Collective Soul’s forthcoming album is entitled “Vibrating.” The set began with “Precious Declaration,” from the band’s third album, Disciplined Breakdown, a #1 hit on the Mainstream Rock Tracks. With strong guitar riffs, a methodical drum beat and powerful vocals from Roland and Turpin, this song makes a definitive declaration. On this evening, the song strongly declared that Collective Soul was present and to be prepared for an evening of powerful, spirited, and skillfully performed music. The positive energy reflected back from the crowd was an avid approval of this declaration.

From the band’s new album Vibrating, “All Our Pieces”had a rhythmic, upbeat, catchy vibe, incorporating melodic vocal harmonies. During “Undone,” the urgency in Roland’s vocals, coupled with the intensity of the drum beats, created a desperate sense of coming “undone.” After almost 30 years the band continues to create fresh music with a classic Collective Soul energy, feel and sound. This is a testament to the incredible songwriting skills and vocal abilities of Ed Roland, along with the musicianship of his bandmates.

Beyond Roland’s songwriting and vocal abilities, he’s an incredible performer. Some people learn to perform or to entertain a crowd. Then there are those, like Roland, where it’s apparent that it’s embedded in every fiber of their being. From the expressions on Roland’s face, to his dances with the microphone, to the grand arm gestures, to his twists and turns across the stage, to his overall dramatic flair, it’s virtually impossible to divert your attention away from Ed Roland. Throughout the performance there was never a moment when Roland was not 100% absorbed in the moment, in the music, in performing, and in translating his musical joy to the crowd.

The hour and a half set included several numbers from the band’s 1995 self-titled, triple platinum album, including their two major hits “December” and “The World I Know,” as well as “Gel” and “Where the River Flows.” Each song has a different sound and feel due to the incredible creativity and diversity of Roland’s songwriting. “December” brought Roland to the edge of the stage, with arms raised in the air, generating cheers from the crowd. As the song began with its repetitive electric guitar notes, Roland sang in a sultry, smokey voice, as Triplett finished the number with a powerful guitar jam. “The World I Know,” with Roland on acoustic guitar, showcased melodic, breathy vocals that had audience members on their feet, passionately singing in unison. “Gel” had Triplett and both Rolands centerstage for a rock and roll musical trio, and “Where the River Flows” provided the perfect opportunity for Triplett to demonstrate his guitar flair upfront and centerstage.

Rabb’s pulsating drum beat during “Heavy,” from 1999’s Dosage, was the perfect backdrop for the song’s fierce vocals, accompanied by the squeals of Triplett’s guitar. Of course no Collective Soul set would be complete without the band’s 1993 hit “Shine,” from Hints, Allegations, and Things Left Unsaid, a song that brought every fan to their feet and had hundreds accompanying the band for each resonating “Yeah! Whoa, Heaven let your love shine down.”

During the performance Roland communicated with the crowd and relayed his connections to the music. “I wanted to write a protest song but I couldn’t. I only can write love songs. So, I decided to write a song about the best writer of protest songs….Bob Dylan!” he stated emphatically, as he began playing “Bob Dylan Where Are You Today?”  With the band’s roots in Georgia, Roland gave thanks to the Georgia musical artists who’ve influenced them, including band favorite, REM. The crowd again rose to their feet with cheers to sing along to REM’s beloved hit, “The One I love.”

Enthusiastic fans sang, danced and stood at their seats throughout the performance. Many attempted to move closer to the stage but were repeatedly thwarted by security. About three-quarters of the way though the show, Roland bent down from his perch onstage and addressed the security. “It’s ok, let them come….it’s ok. Nothing is going to happen.” While security looked skeptical for a moment, Roland was persistent. It’s obvious that Roland wanted to share his energy and exuberance, and what better way than to have the audience at the stage with him, singing and dancing along.

While this night at the NJ Festival of Ballooning began with the threat of storms, the passion, energy and musical spirit of Ed Roland and Collective Soul kept the rain at bay.“Vibrating,” seems to be a perfect name for the band’s upcoming  release, as I believe that not a member of the audience left without feeling the vibrations of this incredible band. 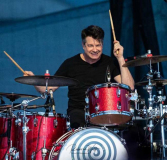 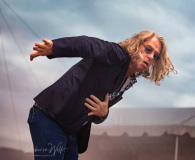 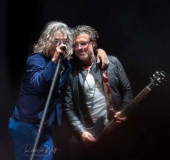