The over 230 ft. furnaces, “stacks,” remnants of The Bethlehem Steel plant, stand as a powerful, foreboding but simultaneously majestic backdrop for the Levitt Pavilion SteelStacks stage. On Sept. 9, 2021, as the moon began to rise and the sky darkened, there was an incredible juxtaposition between the industrial coldness of the steel manufacturing plant (built over 100 years ago) and the vibrant glow of the multi-colored lights illuminating the “stacks,” and signifying the colorfulness and change of the current times.

SteelStacks in Bethlehem, PA, currently a “campus” dedicated to arts and entertainment, dates back to the late 1800s, when The Bethlehem Steel Company was formed. When the Bethlehem Steel plant closed in 1995, the structure remained vacant for more than a decade. However, the  belief in the importance of preserving this historical site, led to a partnership between the City of Bethlehem, a nonprofit arts organization, a redevelopment company, a local public TV station and a retail corporation. This partnership, along with government funding and private donations, led to the 2011 development of SteelStacks which currently includes the ArtsQuest Center, the Levitt Pavilion SteelStacks and the Bethlehem Visitor Center.

While most of Sept. 9th was dreary and rainy, as evening rolled around the skies cleared and the heaviness in the air lifted.  At the Levitt Pavilion SteelStacks, fans filed in with chairs and blankets and filled the lawn with excitement and anticipation. This was to be a night filled with great 90s alternative rock, not from just one phenomenal band, but an additional two crowd-favorite opening acts. The headlining band, Collective Soul, from Atlanta, celebrated their 25th anniversary in 2019 with a yearlong tour, and the release of their album, “Blood.” While the band planned to continue in their musical journey in 2020, Covid put an abrupt end to all plans. However, they returned to the road, bursting with energy and ready to perform, and brought with them two bands, who were the perfect prelude to an evening of spirited, electric rock music.

Along for the cross-country tour was Tonic, originating in L.A. in 1993, and recently celebrating the 25th anniversary of their first album, the platinum selling Lemon Parade.  The band, consists of founding members, Emerson Hart (songwriter, vocalist, guitarist) and Jeff Russo (guitarist, vocalist), as well as veteran member since 1996, Dan Lavery (bassist), and returning drummer, Kevin Shepard. Most often, opening bands have much smaller crowds during their performances, as fans who’ve coming for the headliner are frequently not in their seats or not paying attention to the opening act. This was not the case though for Tonic, who had fans filling the pavilion lawn, eagerly standing in front of the stage, and singing along to every song lyric.

Beginning the performance with “Open Up Your Eyes,” a rhythmic anthem filled with heavy drums and bass, provided a foundation of energy and power to the band’s 8-song set. “Liar,” and “You Wanted More” showcased Tonic’s harder rock sound, while “Take Me As I Am,” added a dose of emotion, and highlighted Hart’s powerful but melodic voice. Passionately sharing a songwriting tale with the audience, Hart expressed, “When I was 21 I told my mom I’d fallen in love. I fell hard and fast. My mom said I was too young, but I said, ‘if you could only see how she loves me.’ My mom was right…it was a disaster.” To the cheers of the crowd, Hart began, “If You Could Only See,” the single from Lemon Parade which reached #11 on the Billboard Airplay Hot 100 in 1997, and 25 years later, remains an obvious fan favorite.

The energy of the band was matched by that of the crowd, many of whom remained on their feet, cheering and singing throughout the performance. As Tonic exited the stage fans began to mill around the venue, many remained lost in the moment as they continued singing Tonic songs to themselves.  A passing fan was heard saying, “That literally made my heart full.” “I know…so good, so good!” her friend agreed. Those sentiments seemed a perfectly succinct review of the performance.

While the lawn had a substantial crowd for Tonic, fans continued to fill in empty spaces in anticipation of the arrival of the second band, coming straight out of New Orleans. Better Than Ezra, originally formed in 1998, currently consists of two founding members, Kevin Griffin (songwriter, vocalist, guitarist) and Tom Drummond (bassist, backing vocalist), as well as, James Arthur Payne, Jr. (guitar, keyboards, backing vocals since 1996) and Michael Jerome, drummer (since 2009.)  Better Than Ezra’s first nationally distributed album, Deluxe, was initially released by the band’s own label in 1993. However, it wasn’t until 1995, when reissued by Elektra Records, that it hit platinum status, with the single “Good” reaching #1 on the Hot Modern Rock Tracks. In the 25+ years since, Better Than Ezra has released 6 studio albums, and a single track, “Grateful,” in 2018.  Their sound has a different feel than that of Tonic, whose sound has a harder edge, with heavier bass and drums. Better Than Ezra has created songs with a primarily lighter, pop-rock, bob-your-head-to-the-music feel. “Good” is catchy and breezy, a song you’d listen to while driving down the highway with the windows open. It has remained a fan favorite for 25 years, and was the opening number of the band’s 9-song set.

From the moment lead singer Griffin walked onto the stage it was obvious he intended to abandon all constraints. With his energy and effervescent spirit, it was as if Griffin was hosting a party and the thrilled audience had been invited as guests. Drummer Michael Jerome played with enthusiasm throughout the set and led fans on a “percussion journey,” showcasing his expertise, as he exuberantly played a range of instruments (including cowbells) held up by his bandmates.  While,Tom Drummond played bass with focus and intensity, his passion for the music was evidenced by his squinting eyes and pouting lower lip. Although Better than Ezra has not done extensive touring in recent years, last month they performed two sold out hometown shows, at the House of Blues, to celebrate the 25th Anniversary of their 2nd album, Friction, Baby. Now on the road with Collective Soul and Tonic, the strong bond these band members share and the enjoyment of each other’s company remains obvious. “This is a big night,” Griffin shared with the crowd. “We are all friends (indicating his bandmates) but it’s fantasy football ….the shit-talking has begun!”

Throughout the set, the crowd responded to the band’s energy and spirit with cheers, impassioned singing, and continuous head-bobbing. The songs in this jam-packed set included, “Misunderstood,” full of catchy hooks, “At the Stars,” with a beautiful melody and ear-catching harmonizing, and band’s newest song, “Grateful,” with strong vocals and harmonies. With lyrics, “I’m going to be grateful every day,” the song sends a strong message, about gratefulness, even in the face of hardship. By the looks on these musicians’ faces, and the energy and spirit they dedicated to their performance, their gratefulness came shining through.

Having witnessed Griffin’s enthusiastic performance, I wasn’t expecting anyone to present as more energetic and enthused. That was until Ed Roland of “Collective Soul” came bounding onto the stage with his electricity and flair. Roland was captivating from the band’s opening number, “Who Loves.” In his sparkling silver suit it was difficult to take your eyes off Roland as he played his acoustic guitar, gestured his arms in the air, and danced around the stage. No one could ever deny that Roland loves what he does. Whether he was singing and playing guitar or focusing all his attention vocally, Roland was equally as energetic and animated, and his voice has remained powerful and gritty. Being off the road for a year and a half hasn’t diminished his vocal abilities, nor has the almost 30 years since the formation of the band.

Collective Soul was formed by Ed Roland, along with Dean Roland (rhythm guitarist and brother) and Will Turpin (bass player and backing vocalist), who’ve remained with the band. While the band has seen several changes over the years in lead guitar player and drummer, Johnny Rabb has now been the drummer/percussionist since 2012 and Jesse Triplett has been on lead guitarist /backing vocalist since 2014. Over the years, the band has released 10 studio albums, the 2nd of which was certified triple platinum and remained on the Billboard 200 chart for 76 weeks. The album’s single “December” reached #1 on the Mainstream Rock and Modern Rock charts and the band again achieved #1 ranking on the Mainstream Rock chart with singles “Precious Declaration,” “Listen’” and “Heavy.”

During moments throughout the performance, especially high-energy fan-favorites like “Shine,” Roland crossed the stage from end to end, passionately encouraging fans to join him in the singing and spirit of the band. While these fans were already hooting and cheering, their enthusiasm skyrocketed with the encouragement from Roland. As much as Roland was enjoying his role as a showman, it was obvious he liked making a real connection to the fans. Speaking to the audience Roland queried, “We were out west last week when you got the rains. Is everyone good out there? We were praying for you.” Fans responded with enthusiastic cheers. Roland continued, “We don’t believe in the States of America; we believe in the United States of America so we are here for all of you just like we would expect you to be here for us.” The crescendo of cheers from the crowd was a good sign these fans felt the same.

Demonstrating his own passionate performance was lead guitarist Jesse Triplett. Triplett was the consummate rock guitar player, jamming on his double-neck guitar, playing to fans from the edge of the stage, and engaging his whole body in his music. While Dean Roland, Will Turpin and Johnny Rabb did not employ the same level of outward flair, their passion for the music that had fans on their feet for the entire performance was strikingly apparent. “We love being out here playing for you, and we love this venue. Your people are so darn cool,” said Roland, to the applause and hoots of the crowd. The 14-song set included songs with heavier instrumentals, like “Heavy,” and “Why, Pt. 2, and quieter, more vocally-based numbers like, “The World I Know”, “December” and “Run.”

Speaking about their roots, Roland stated, “We are from the state of Georgia and we love where we are from…so many influential bands, like James Brown, Otis Reading, Ray Charles, the Indigo Girls….. We want to play a song from one that influenced us, but you have to sing the chorus.” As the band began playing REM’s “The One I Love,” the adoring audience members didn’t have to be convinced to join in. I have a feeling with almost 3 decades in the industry, 10 studio albums, multiple hits, and legions of fans, Collective Soul has been themselves been influential for many musicians and bands. From the oldest to the newest songs, their music continues to sound relevant and fresh, and their performances are equally as invigorating and engaging. What more can a band that’s been around for decades ask for!! 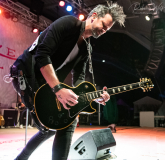 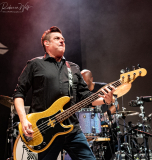 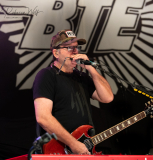 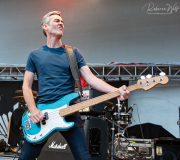