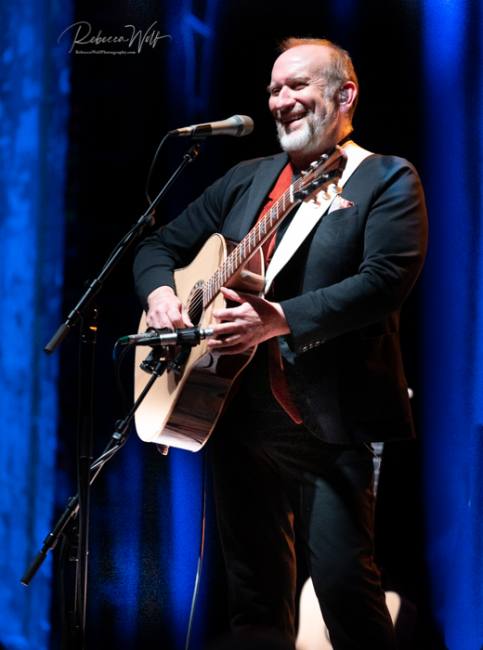 “Weren’t we supposed to be here two years ago?” Colin Hay quipped, with a broad smile across his face as he greeted the packed house at the Keswick Theatre on April 6, 2022? Yes, he was correct. This performance was supposed to have occurred in April 2020. Did we lose these past two years somewhere? Did we all fall asleep and awaken after a two year nightmare? Unfortunately, the nightmare has not completely departed. While we were all fortunate enough that evening to be in-person for a live musical performance, the virus has not been eradicated and restrictions remain in a number of locations, including the Keswick Theatre, where mask wearing continues. However, on this night no one appeared to be feeling anything beyond excitement about a performance for which they’d been waiting two years.

Colin Hay appears like an “everyman,” no flash, no pretense, no airs. He presents himself as down to earth, humble and chill. However, at the same time there’s a part of Hay that seems inwardly melancholy, while being outwardly quite humorous. Hay is someone you could sit down with for a cup of coffee and never get the feeling you’re conversing with a Grammy Award winner. It’s this depth of character, along with Hay’s sense of self that makes him a wonderful songwriter and storyteller.

While Hay stood alone center stage at the Keswick Theatre, his three additional guitars remained propped behind him, like background band members. Although physically performing solo, Hay’s humorous stories filed the stage with figures from his life, and filled the venue with laughter from the adoring crowd. As anyone who’s seen a Colin Hay show can affirm, as much as Hay’s performances are for showcasing his music, he equally revels in sharing about the people, places and moments in his life. These stories are not meaningless, silly tales but rather significant time capsules from Hay’s past. As a skilled orator, Hay spun tales that kept the audience completely locked into his every word. Suddenly, Hay stopped his train of thought mid-sentence and with a grin queried the crowd, “Am I talking too much?” Receiving feedback indicating enjoyment of his sharing, Hay continued on, and with a chuckle shared about a friend who’d accompanied him to shows and stood in the wings energetically motioning to Hay to cut off his talking and move on with his “performing.” The audience joined in Hay’s laughter at this depiction, knowing full well that Hay’s storytelling is just part of his performing.….a beautiful part.

A benefit of having this performance postponed by two years is that Hay has just released a new album that he’s now able to share with fans. Now and The Evermore, continues his passion for sharing tales, including  “Agatha Bell,” one woman’s story of finding happiness and love after the death of her husband, as well as personal beliefs, including the album’s title track about mortality. Regardless of the lyrical content of Hay’s new material, the vibe of the songs are typically upbeat and light. In addition to performing these two numbers at the Keswick Theatre, Hay performed “Starfish and Unicorns,” a song he relayed to the audience as having connection to the memory of his parents. Throughout the evening Hay took moments to share meaningful stories and commentary about his beloved parents. It was very touching to hear the love and respect Hay holds for both his mother and father and how they shaped him into the person he became. Telling one of his father’s favorite jokes, and getting laughter from the crowd, Hay looked skyward and lovingly stated, “See dad, you’re still killing it!!”

The evening’s set included several of Hay’s earlier releases with sentimental lyrics and touching tones, including “I Just Don’t Think I Will Get Over You,” originally released on his 1998 album Transcendental Highway, as well as “Waiting for My Real Life to Begin,” “Maggie,” and “Beautiful World” from 2001’s Going Somewhere. “Beautiful World,” depicts a simplistic, beautiful world, with Hay’s melodic, uniquely soothing tone, while “Maggie,” is a reminiscence about a sweet childhood love, described by Hay as his first “love” of an older 9 year old woman, as a younger boy of 8 1/2.

Of course no Colin Hay performance would be complete without including numbers from his Grammy Award winning band Men at Work, which put Hay’s musical name on the map. While Colin Hay has been a solo artist for decades,

Men at Work’s short career remains well-respected due to their incredible success. While longstanding fans of Hay are enthused to attend his performances and experience the breadth of his incredible work, hearing those iconic Men at Work numbers will always bring an abundance of cheers and applause from the crowd. “Who Can it Be Now,” and Down Under,” from Men at Work’s 1981 debut album Business as Usual, and “Overkill,” from 1983’s Cargo, have different vibes as acoustic numbers, but still ring out with the uniquely identifiable sound and energy of Hay’s voice, and provide the same thrill. “Down Under” was the perfect number to end an evening that had the audience emotionally included throughout the performance and now had them musically included as well, as all in attendance joined in the chorus of, “who can it be now?” While the wait for this performance was two years, it was surely worth the wait. Colin Hay, this incredibly talented, humble, humorous “everyman” will aways be worth the wait.