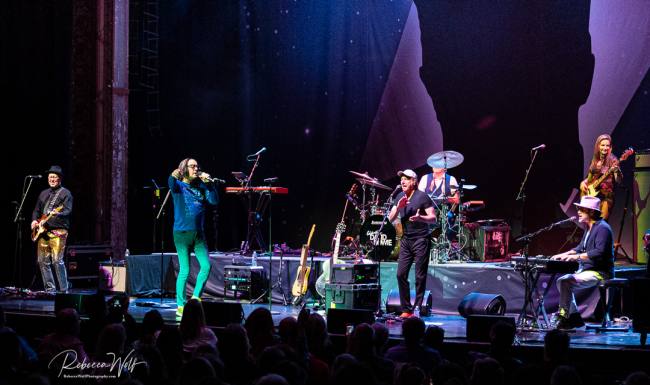 This coming weekend marks the end of the Fall ’22  tour of Celebrating David Bowie, produced by Angelo “Scrote” Bundini and Miles Copeland.  The original performance of Celebrating David Bowie took place in 2016 shortly after Bowie’s passing, and was created by Scrote as a one night event to honor the legendary icon. The tremendous feedback resulted in a tour that has now gone worldwide, crossing 5 continents and 17 countries. The interest in the tour was not solely from fans but from musicians as well. However, it was important to Scrote that the performers fit naturally together, and the focus of the show remained David Bowie, not any individual artist.

Scrote is an accomplished musician who began his musical life in jazz, orchestral and electronic music.  Through an unexpected connection to Adrian Belew, Scrote found his way to the world of David Bowie. Belew is a singer, songwriter, multi-instrumentalist and record producer. He’s worked as a session musician for the likes of Frank Zappa, Talking Heads and Bowie (later producing Bowie’s 1990 Sound + Vision Tour), spent 28 years as singer and guitarist for King Crimson, and has released 20 solo albums, including alternative rock and new wave. Belew has been alongside Scrote from the original 2016 performance through this current tour.

Since the pandemic, Miles Coleman has joined in producing the performance, allowing Scrote to focus on the role he enjoys the most, music director and band leader. The current tour line up was set to tour in 2020 when Covid hit. Now, more than 2 years later, these musicians are back on the road in celebration of the incredible musical, theatrical master. The Fall ’22 Tour has included Scrote, Belew, and Todd Rundgren on guitar and vocals, Royston Langdon on keyboard, guitar and vocals, Ron Dziubla on saxophone and keyboard, Travis McNabb on drums, Angeline Saris on bass, and on select dates, Jeffrey Gaines on guitar and vocals and Angelo Moore on vocals. In the course of 5 weeks this fall, the tour has travelled across the US from San Diego to Montreal to NYC, and will end in Phoenix. Along the way stops have included Atlanta, Nashville and Denver

I was fortunate to attend a performance at the Keswick Theater, in Glenside, PA, as Celebrating David Bowie travelled through the northeast. In the packed theater the excitement was palpable, and the crowd abuzz, as all eagerly awaited the start of the show. As the lights arose onstage, the incredible backdrop featuring a towering silhouette of Bowie was a striking reminder of the legend being celebrated on this evening. Cheers erupted throughout the crowd as Langdon, Dziubla, Saris, and McNabb took their places onstage and Scrote welcomed the crowd. The cheers continued as Belew joined his bandmates to open the night with “Sound and Vision.” Belew, accompanied by the harmonies of Scrote, the rhythmic drums of McNabb and the keyboard chords of Langdon, set the powerful, energetic vibe that continued with the musicians and the audience throughout the night.

With Bowie’s 50 year career there was a vast amount of music that could be chosen to showcase his brilliant career. Celebrating David Bowie successfully created a setlist that pulled from music that spanned Bowie’s career. With the number of talented musicians and singers on one stage, each vocalist had the opportunity to perform as lead singer on songs best suited to their vocal style and ability. Similar to Bowie’s every-changing energy, style and spirit, the change of lead vocalists brought an added a layer of excitement and electricity to both the stage and the audience.

With the crowd now fully amped, the beloved Todd Rundgren entered the stage,  in a bright yellow suit, to the roar of his fans. Rundgren, like Bowie is known for his unique style, energy and diverse musical abilities. There is no one quite like Rundgren and what better place for Rundgren to perform than in the suburbs of his Philadelphia hometown.  Rundgren expertly performed “Young Americans,” spitting out lyrics at lightning speed, while dancing across the stage (as only Rundgren can do), as the crowd joined in for the chorus and rocked along in their seats. With fans singing and rocking from the onset of show it was clear the spirit in the audience would only exponentially rise as the night progressed.

If it wasn’t fantastic enough to have one hometown musician on stage, the audience was enthralled to have the incredible rock guitarist, singer and Pennsylvania native, Jeffrey Gaines performing on the tour. Swaggering on stage with his long dreadlocks, velvet blazer, and colorful scarf, Gaines presented with a dynamic spirit that matched his powerful, rich vocals, and brought the passion of “Moonage Daydream” to life.  It’s no wonder with this emotive energy that over the course of the evening Gaines performed several of Bowie’s numbers that embody a soulful, emotive vibe, including “Five Years” and “Win,” as well as the passionately energetic “Rebel Rebel” and “Suffragette City.”

Royston Langdon was first showcased on lead vocals during “Rock and Roll Suicide,” from Bowie’s incredible creation, The Rise and Fall of Ziggy Stardust. As Langdon sauntered across the stage and peered from beneath his large, white, brimmed hat he sang with a sultry, aching voice well-matched for the song’s quiet intensity. Singing the album’s title number, Langdon added the perfect rawness and dramatic emotion for this iconic musical number and for the iconic persona created by David Bowie. The mysterious nature of Langdon’s vocals and his overall stage presence were perfectly suited for the mystical number “The Man Who Stole the World,” while Langdon’s ability to smoothly flow from a deep, alluring tone to a beautiful falsetto was perfectly highlighted in “Golden Years.” Whether playing keyboards, guitar, and/or singing, Langdon presented a vibe of external coolness and mystery, with momentary bursts of powerful rock and roll spirit to fit the musical moment. Such was the moment during “Let’s Dance,” Bowie’s chart-topping 1983 hit. With Scrote announcing to the crowd, “We want to see you dancing in the aisles,” audience members were on their feet as the passionate, seductive rumble of Langdon’s vocals were perfectly suited for, “Put on your red shoes and dance the blues.”

Avid fans of Todd Rundgren filled the crowd. Rundgren has an immensely devoted fanbase and they were thrilled to have yet another opportunity to witness Rundgren’s incredible showmanship, alongside his fantastic vocal and instrumental abilities. As is quintessentially Rundgren, there were multiple outfit changes. Each time Rundgren departed the stage he returned with a new, colorful, eye-catching ensemble. Rundgren easily morphed his voice to the song and the mood, whether singing the spirited, beloved classic “Changes,” to the passionately chilling “Life on Mars?” to the foreboding “Space Oddity,” to the anthem-like feel of “All the Young Dudes,” with audience members enthusiastically providing the chorus, “All the young dudes, carry the news!”

Space was a theme that Bowie focused on across his musical career and Scrote was able to showcase his abilities as not only a musical director but skilled guitar player and vocalist on “The Stars (Are Out Tonight),” from 2013’s The Next Day and “Hallo Spaceboy,” from1995’s Outside, perfect for Scrote’s musical roots with its electronica, industrial feel. And, Belew played acoustic guitar and sang the soaring “Starman” while the crowd was again thrilled to join on the chorus, “There’s a starman waiting in the sky.”

Bowie did not solely focus on space and stars. Rather, Bowie had definitive thoughts on fame and fashion. During the opening of the funk rock tune “Fame,” McNabb energetically performed on drums before Belew joined on electric guitar and fiercely sang lyrics written to represent Bowie’s momentary disdain with the world of fame. “Fashion,” Bowie’s funk rock number from 1980’s Scary Monsters, was expertly performed by Scrote on vocals, while Belew showcased searing electric guitar skills and Saris passionately kept rhythm on the bass.

Dziubla’s stellar skills on sax were on display throughout the performance, but highlighted during “Moonage Daydream,” when Dziubla descended from his perch behind the keyboard to jam with Scrote, and later performed a rocking sax solo centerstage. Band members were instrumentally highlighted at various points throughout the set, including Rundgren and Belew with guitar solos during “Stay,” and Scrote during “Moonage Daydream.” For over two hours, these amazingly skilled, dedicated musicians performed as a well-oiled machine, combining their hearts, souls and talents to celebrate the incredible musical legacy of the one and only David Bowie. The enthusiasm in the audience, lasting throughout the spectacular celebration, was a testament not only to Bowie’s music but to the performances of Scrote, Belew, Rundgren, Langdon, McNabb, Dziubla, Saris and Gaines.

As the show came to a close, band members and audience members passionately sang the final words of “Heroes” in unison. “We can be heroes, just for one day!”  In a world currently filled with stress, strife, and uncertainty, what a perfect note to end on. Shouldn’t we all be heroes…even just for one day! 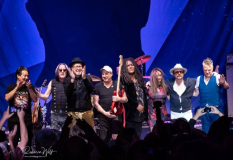