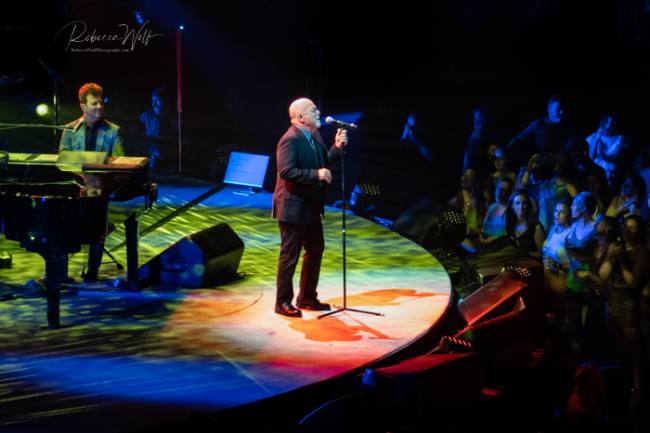 On July 20th I sat in Madison Square Garden awaiting my third time seeing a Billy Joel performance at MSG. However, this time was extra special because I was now with my two daughters, ages 21 and 24, who grew up listening to all of their mother’s favorite music. While other parents drove their cars playing Kids Bop and Disney tunes, my children were immersed in the music of the 70s and 80s, including Billy Joel.  Madison Square Garden was sold out on July 20th, as it has been every night Billy Joel began playing in his MSG residency in January 2014. My daughters looked around the arena in awe. “I’ve never seen any venue so packed,” one daughter said in amazement. “Look, there are people sitting behind the stage,” the other one commented in disbelief. By the end of the show it was obvious to both why the arena was sold out for each monthly performance, and why hearing Billy Joel perform live is worth it even for fans sitting behind the stage.

I have two very distinct memories connected to Billy Joel, that amongst the others, hold specific place markers in my life. When The Stranger was released in Fall 1977 I’d just turned 12 years old, recently started 7th grade, and was going to my first school dance. In the foyer of the middle school was a showcase with three new vinyl records to be raffled. I stood examining the albums behind the glass. While I didn’t know who Billy Joel was, I was fascinated by the black and white album cover and the man sitting on the bed. I decided then and there that if I won the raffle I’d choose that album. While I didn’t win the raffle, by spring 1978, with The Stranger in the top 10 of the Billboard 200 chart, I surely knew who Billy Joel was and was a fan of his music.

It’s no surprise that six years later, as a Freshman in college, I was sitting outside Boston Garden overnight with a group of friends, to be the first in line to buy tickets for Billy Joel’s An Innocent Man Tour…my first concert. Our group of 10 garnered seats in the 1st and 2nd rows. It was exciting enough to be at a first concert, but to be seated in the front, to have Christy Brinkley sit alongside your friend group, to get to stand at the edge of the stage and be handed the guitar player’s pick…it was more than my 18 year old brain could handle.

Thirty-plus years later, after Billy Joel began his residency at Madison Square Garden, I finally attended another Billy Joel performance. I was enthralled enough to return two years later. When sitting a distance from the stage the natural reaction is to fluctuate between watching the stage and the Jumbotron  screens in the center of the arena. During the performance, as cheers swelled in the front, fans eagerly attempted to get a glimpse of what was causing this commotion. As Billy Joel began to sing “Uptown Girl” the video camera on stage panned to the front row, and projected on the screens was Christie Brinkley, joyfully singing along to her ex-husband’s tribute to his then uptown girlfriend. While it had been years since the dissolution of their marriage, the still positive connection between the two was a pleasure to witness….although I was not this time sitting alongside Brinkley to feel it!

Now 38 years since my first Billy Joel concert, I sat at Madison Square Garden, as Billy Joel stood with his mic and spoke to the crowd of 20,000 about the song he was about to sing….one he’d written in 1982. At 73 years old he stated that voices change and he wasn’t confident if he’d be able to hit the high note. “It’s okay if you boo me,” he said with a chuckle and a broad smile across his face. As the first notes of “An Innocent Man” began I felt my heart skip a beat, as I immediately was brought back to 1984….sitting under the tracks of the T (Boston’s railway system) in front of Boston Garden, waiting for the ticket window to open at 8am (the realness of which young people today will never experience.)  Everyone at MSG sat holding their breath; would Billy Joel hit the high note? With every ounce of vocal power in him, Joel hit…”I AMMMMM an innocent man. Oh yes I am, an innocent man.”  The roaring cheers of the crowd, matched the triumphant look on his face.

Over the course of the more than 2 1/2 hour show, Joel performed a range of songs from his 50 year career, including cuts more familiar to his devout fans, as well as hits known by all. Each time Joel was set to play a potentially less well-known number he’d introduce it, as if to give fans a heads up that this was likely not one of the greatest hit they were awaiting. However, there were enough passionate Billy Joel devotees in the crowd that every song brought cheers , as well as a back-up chorus of thousands. However, there was a definite shift when Joel played his hits, including “Movin’ Out,” “Only the Good Die Young,” “Piano Man,” “We Didn’t Start the Fire,” “It’s Still Rock and Roll to Me,” and “You May Be Right,” when the crowd rose to their feet, sang along at full volume and brought down the house.

It can be hard to see the artists from your younger years age and change. It’s a striking reminder of the passage of time and your own aging. However, there’s a sense of comfort when you experience one of those musicians who’s able to perform with ongoing energy, passion and skills, and can momentarily return you to those days of your youth. Billy Joel provided that for me on June 20th. Now, if I can only return for another show, sit in the front, and get the guitar player’s pick. I will have then come full-circle. 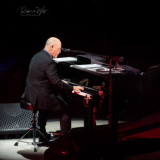 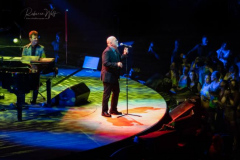 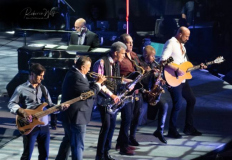 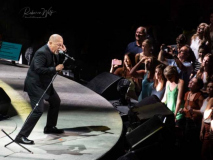