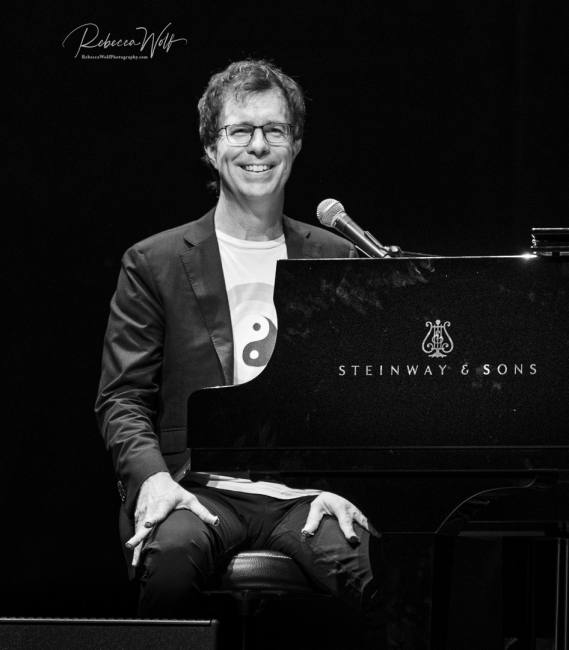 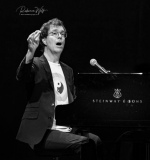 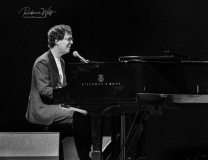 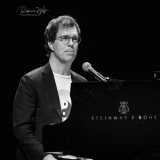 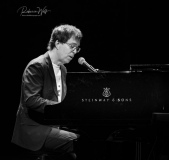 When attending concerts I’m often as surprised by an audience’s reaction as I am thrilled by an artist’s performance. Of course you expect every show to have a crowd filled with devotees of the performer. However, each audience reacts with a unique spirit and energy, and connects differently to the musician(s) on stage. On September 2nd, at the Count Basie Center for the Arts I again experienced this combination of surprise and thrill.  When I entered the theater for the Ben Folds performance I had no idea what to expect from Folds or the crowd. While I had some familiarity with Ben Folds and Ben Folds Five (the alternative rock band Folds fronted and played piano for from 1993-2000 and again in the early 2010s), I’d never seen him play live, and was not well-versed in his musical catalogue, or the devotion of his fanbase. However, on this evening I was positively thrilled with Folds’ unbelievably skilled and intense piano playing, his soulful singing, and heartfelt storytelling, as well as surprised by the audience’s incredible vocal participation and passionate excitement for Folds and his performance.

Ben Folds is a singer-songwriter, composer and multi-instrumentalist. He began his musical life as a drummer, and additionally plays the bass and guitar. However, it’s the piano that led Folds to achieve his greatest musical recognition. While Folds formed his first band in 1988, it was with Ben Folds Five that he gained commercial success with the single “Brick” from the band’s 1997 album Whatever and Ever Amen. Over the past two decades Folds has continued his work as a solo musician, has collaborated with a number of artists, and has continued his live performances. While Folds might not be a name known by all, and does not tour on a continuous basis, he surely was  held in extremely high regard by the approximately 1200 fans at the Count Basie Center for the Arts on September 2nd.

Ben Folds entered the stage to the thunderous applause of the crowd. The high level of enthusiasm felt more likely to be aimed at a large rock and roll band, rather than a middle-age man in a suit jacket, at a Steinway piano. However, over the next 90 minutes the crowd repeatedly demonstrated their incredible devotion to Folds with ongoing cheers and passionate vocals. Folds opened the set with the upbeat “So There,” the title track from his 2015 album, followed by “Annie Waits” from his 2001 debut solo album Rockin’ the Suburbs. “Still Fighting It,” also from his solo debut,brought loud cheers from the crowd. Each time it seemed the crowd couldn’t cheer more enthusiastically this assumption was proven wrong.  In between the cheering, fans yelled songs they hoped Folds would sing. While Folds never entertained these requests, he instead made up an impromptu number about performing in NJ, at the Count Basie, and having a dressing room with a poster of Joan Jett. As Folds sang his fingers quickly made their way along the keys, and he brought the crowd to laughter with this spontaneous jazzy ditty.

Folds’ fingers delicately flew across the keys in some moments, but at other points they landed on the ivories with an incredibly heavy force. Although Folds’ energy on the piano could be powerful, it was never without a melodic tone. His fiercely passionate playing brought an additional layer of emotion to the music and provided an indication of Folds’ intense feelings. Just listening to the lyrics of many of Folds’ songs, it’s evident that Folds is not a writer of breezy, carefree, meaningless music. Rather, Folds’ songwriting comes from deeper thoughts and heartfelt feelings. Throughout the performance, Folds vocals were smooth and clean, not too high and not too low, perfect for his musical storytelling. Folds obviously liked sharing stories and frequently provided tales of his songs’ origins. Some stories were melancholy, like “Fred Jones, Pt. 2,” from Rockin’ the Suburbs, and “Cigarette,” from “Whatever and Ever Amen,” the prequel of Fred Jones’ story. Other tales were more upbeat. As the crowd sat in silence, eagerly listening to every word, Folds spoke with a grin, “The producer of my first solo album didn’t get it; he didn’t understand the lyrics. I tried to explain it to him but he still didn’t understand. So, maybe you will have a mind like me and you will.” Sitting back at the piano Folds began playing “Zak and Sara,” to enthused audience members who definitely seemed to have a mind like Folds.

With the first notes of “Effington,” from 2008’s Way to Normal, Folds pointed to the audience, prompting his devoted fans to instantly begin reciting the opening line of the song with unexpected power and gusto. “If there’s a God he’s laughing at us and our football team!” This was surely not the only moment when the evening went from a one-man performance to a thousand-person show.  As Folds segwayed to “You Don’t Know Me,” featuring Regina Spektor, from Way to Normal, he instructed the crowd, “If you know Regina’s part sing it!” Audience members eagerly followed Folds’ direction and filled the theater with their beautiful, melodic voices. Confused by the beauty of the sound, I momentarily wondered if there were theater speakers playing a professional choir on a vocal track. I again experienced this same disbelief during “Army,” from Bend Folds Five’s 1999 The Unauthorized Biography of Reinhold Messner, as the crowd’s powerful clapping turned to an incredible, full-audience choir. Again I looked around in disbelief, having  never attended a performance with audience members singing as passionately and beautifully as Ben Folds fans.

While many performers end their shows with their most upbeat, high-spirited, energetic song of the night, Folds ended his performance with “The Luckiest,” a solemn, introspective, heart-touching number. A beautiful song to complete a night of incredible musical storytelling. Ben Folds’ performance that evening was a thrill.  It was also a night of wondrous surprise at the audience’s incredible participation and excitement.  During the show I overheard a fan comment to his friend, “He’s brilliant!” The word “brilliant” seems to perfectly sums up fans’ feelings about Folds and his performance that evening.