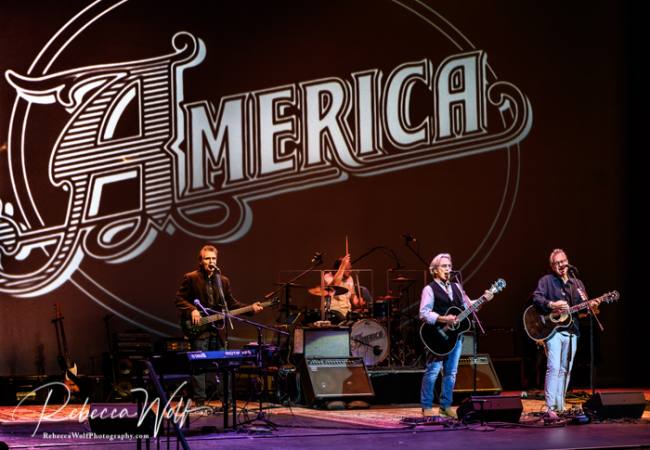 Nostalgia. Those of us who love classic rock, attend our favorite 70s-80s concerts not only because we love the music but because we love that the songs bring back precious childhood memories. To me the band America and their library of iconic music is all about nostalgia…50 years of nostalgia. Dewey Bunnell and Gerry Beckley, as well as former band member (Dan Peek), met as teenagers in the mid-60s in London, while their fathers were stationed at the US Air Force base. Forming a bond, as well as a band in 1970, they dubbed themselves “America”, to assure they were recognized as Americans (not Brits attempting to sound like Americans.) While Peek left the band in 1977, Burnell and Beckley have remained together for the last half-century. As proudly noted by Dewey Bunnell during their show at the St. George Theater, America has played at least 100 shows a year for the past 50 years. “As long as you keep coming we will keep playing,” Burnell exclaimed to the cheers of the packed house.  Can any bands can equal that track record?

There is a distinct connection between the name of the band and the music they’ve created. Their melodies and lyrics evoke an All-American feeling, and there’s a light, relaxed, breeziness to many of their songs. When you listen to “Venture Highway” you envision yourself riding down that open road with the warm breeze blowing through your hair, and from the first guitar strums of “A Horse With No Name”, you feel yourself crossing that hot, dry desert.

Friday night’s performance at the St. George Theater opened up with the band’s 1974 #4 hit “Tin Man”, followed by their 1982 song, “You Can Do Magic”, the band’s first major success after 7 years.  The show covered all of America’s hits, two covers, and a few deeper cuts. Bunnell and Beckley obviously enjoyed performing, enjoyed the energy of the audience and enjoyed each other. They shared a connection as well, with the 3 additional band members, Richard Campbell (bass, vocals), Ryland Steen (drums, percussion, vocals) and newest member, Steve Fekete (lead guitar, keyboards vocals.)  Rich Campbell, with the band for 16 years, demonstrated his guitar prowess and enthusiasm, as he traveled to the front of the stage to play alongside his fellow bandmates. Steve Fekete, was a whirlwind on the guitar, while jamming with Bunnell and Beckley.  Ryland Steen, with America since 2014, further lifted the energy of his bandmates and the crowd with his intensity and passion on the drums.

The fantastic guitar jamming, coupled with the powerful percussions, added an amplified rock and roll vibe to the atmosphere, beyond what one would typically expect from a folk rock band. Audience members enthusiastically sang along throughout the performance, with fan-favorites bringing many to their feet. From the opening number, to the encore, “A Horse With No Name”, the night was filled with the warmth, spirit and passion that only comes from artists who truly love what they do, have an amazing connection with each other, and want to share that with their fans. That’s Dewey Bunnell and Gerry Beckley, that’s America, one of the greatest 70s folk/soft rock bands.…delivering a night of feel-good, nostalgic music and wonderful memories. 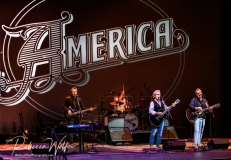 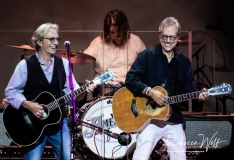 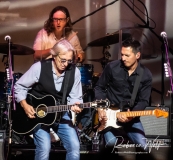 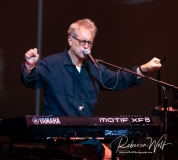 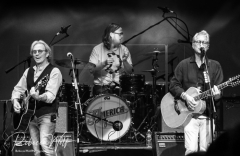 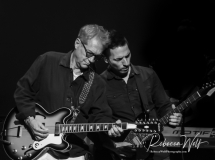