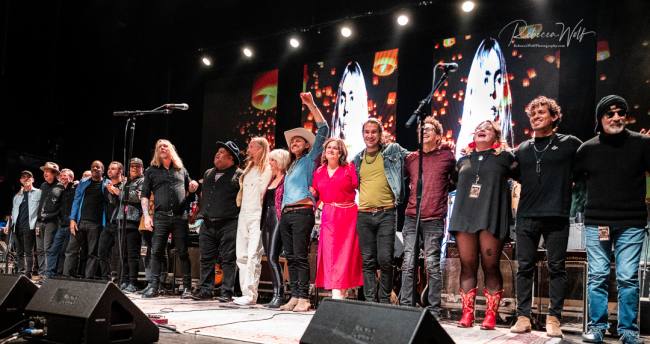 The Allman Family Revival 2022 marks the 5th anniversary (6th tour) of a musical celebration that began in December 2017 to pay tribute to the life, music and spirit of the legendary Gregg Allman. Allman passed away on May 27, 2017 and that December’s performances paid homage to Allman on what would’ve been his 70th birthday. The tour was spearheaded by Allman’s son, singer-songwriter, guitarist, blues rock musician Devon Allman. Five years since Allman’s passing and the inaugural tour, there still remains an overwhelming desire for friends, family, musicians and fans to continue celebrating and paying tribute to the music icon. With The Devon Allman Project as the show’s centerpiece, the Allman Family Revival has brought a wide range of musicians together each year to showcase the musical history of Gregg Allman and The Allman Brothers Band, as well as music from artists on the tour. With close to 20 stops on each tour, various musicians join “the family” along the road, and on the stage, making for a dynamic mix of artistry and skill.

On December 2, 2022 the Allman Family Revival arrived for their performance at the equally iconic Beacon Theatre in NYC. For many years, the Beacon Theatre was home to The Allman Brothers Band, who performed a month-long string of shows at the theater each spring, consistently packing the house for every show. With this treasured history, it’s no surprise that the Beacon Theatre has been a sacred tour stop for the Allman Family Revival each year, as The Allman Brothers and the Beacon will forever be indelibly connected.  With Devon Allman as ringleader of the Allman Family Revival, the performers for the 2022 Beacon show included Allman’s bandmates, John Lum, John Ginty, R. Scott Bryan, Justin Corgan, David Gomez, Jackson Stokes and Duane Betts, as well as, Alex Orbison, Larry McCray, Luther Dickinson, Donavon Frankenreiter, Maggie Rose, Jimmy Hall, and The River Kittens.

From the moment you stepped inside the majestic Beacon Theatre you could feel the excitement and electricity in the air.  The theater was abuzz with avid Allman fans, eager to share in the celebration of Gregg Allman’s upcoming 75th birthday. More than 50 years since the release of The Allman Brothers Band’s 1969, self-titled, debut album and the fans’ passion for the band, the musicians, and the music they created, has not diminished. Nostalgia for the past, one’s youth, and an era when down-home, good ole rock and roll was king, has kept alive a generation of die-hard Allman Brothers enthusiasts.  And, there’s no musician from the Allman Brothers Band who’s engendered as much devotion as Greg Allman.  As the lights arose onstage at the Beacon Theatre, thunderous cheers rang out from the floor seats to the uppermost balcony. A towering backdrop with illuminated portraits of Gregg Allman lit the back of the stage, leaving no doubt who everyone was there to celebrate.

If there was ever a doubt about the specialness of the Beacon Theatre and the crowd to the Allman family, this notion was immediately dispelled when Devon announced that the evening’s setlist would be all Allman… “the first in 6 years of Revival shows!” The resounding cheers reflected back that feeling of specialness and emotional connection directly to Allman and all the Revival musicians. Throughout the evening’s 2-hour set, Allman introduced Revival family members who joined the celebration center-stage and showcased their skills on classic Allman Brothers favorites. While Allman performed on lead guitar and vocals for various numbers, upon turning the spotlight on a Revival member, Allman periodically left the stage, allowing the focus to be directly shined on the musical guest.

With a white fedora atop his head and his trusted harmonica in-hand, Southern rock legend Jimmy Hall entered the stage with a strut in his step and a sparkle in his eye to perform the beloved, foot-tapping, jiving “Statesboro Blues.” Accompanying Hall on lead guitar and showcasing his incredible skills was Luther Dickinson, whose fingers flew across the frets as he deftly and soulfully played the blues. “Blue Sky,” provided another opportunity for Dickinson to share his passionate energy, spirit and phenomenal skills on lead guitar, with Duane Betts on lead vocals and guitar, and Allman supporting on background vocals and guitar.  As the incredible 8-minute jam rolled to a close the audience roared with cheers, whistles and applause, only quieting to hear the unmistakable keyboard notes of John Ginty that open “Ain’t Wastin’ No More Time,” performed by Devon Allman, with his deep, warm, soulful voice.

Bluesman Larry McCray, with his Flying V Guitar, mesmerized the crowd with his emotive guitar playing and blues singing during “Soulshine.” McCray’s passion was written all over his face as he closed his eyes, tilted his head and allowed the spirit of the music to flow through his guitar. “Nobody Left to Run,” brought Hall back to the stage with Maggie Rose, who later returned to share her powerful, sultry vocals skills on “Whipping Post,” to which hundreds in the crowd resolutely responded, “Good Lord, I feel like I’m dyin’!” Maggie Rose’s velvety vocals were also on display during a touching acoustic duet of “These Days,” with Allman, their voices intertwining and creating a beautiful, melancholic spirit, a soundtrack to the heart-touching slideshow of Allman Brothers photos illuminating the stage backdrop.

Additional songs in the set include “Southbound,” showcasing Donavon Frankenreiter, “Come and Go Blues,” with the River Kittens, as well as “Dreams” and “Melissa,” featuring Allman on vocals, the latter of which felt sentimentally chilling. Throughout the show there was no shortage of phenomenal percussion skills, with John Lum and Alex Orbison on drums, David Gomez on congas/bongos and R. Scott Bryan on adding additional percussion instruments.  As Allman noted, this was surely something special, as not many performances have four percussionists.

It’s no surprise that the final song of the evening was the beloved classic Allman Brothers Band hit, “Midnight Rider,” which brought all the Allman Family Revival musicians back to the stage. The joyful energy onstage was matched by the effusive enthusiasm in the crowd, as all in attendance were on their feet, singing at full volume, while the Allman Brothers Band joined in spirit, playing along on the stage backdrop. The music and the moment felt simultaneously celebratory and sentimental. There will never be another Allman Brothers Band nor another Gregg Allman, but the Allman Family Revival has continued to be an amazing opportunity for bringing together musicians and fan, friends and family, to celebrate the life, the spirit and the music of this legend! Happy 75th Birthday Gregg!! 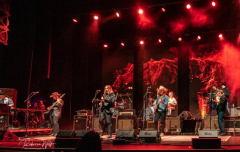 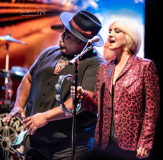 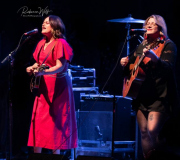 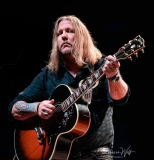