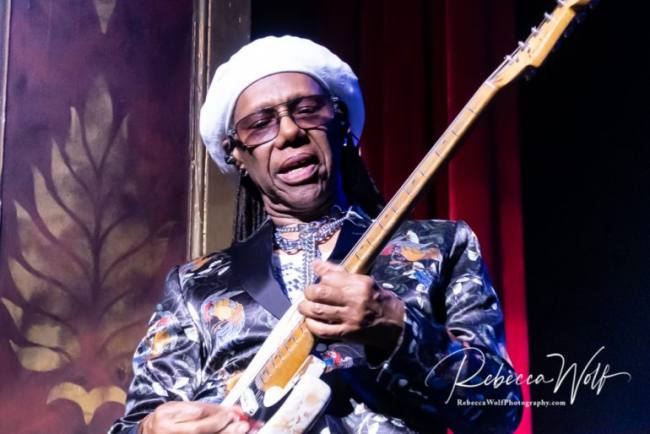 Watching Nile Rogers it was impossible not to notice the pure joy he exuded the minute he stepped onto the stage. Along with this immense joy, Rogers displayed great pride in his many accomplishments, as he shared stories of the famously talented musicians he’s collaborated with as a music producer, composer, guitarist and songwriter for the past 40+ years. Rogers, co-founder of the band Chic, three-time Grammy Award winner, Rock and Roll Hall of Fame Inductee, and chairman of the Songwriters Hall of Fame, has written, produced and performed on more than 500 million albums worldwide.  With Chic, Rogers co-wrote and produced their hit singles, “Dance, Dance Dance, “ “I Want Your Love, ” “Everybody Dance,” “Le Freak,” and “Good Times.” As a collaborator, Rogers is responsible for the production of David Bowie’s biggest selling album, Let’s Dance, for Madonna’s hit album Like a Virgin, for co-writing and producing Diana Ross’s “I’m Coming Out”, as well as Sister Sledge’s “We Are Family.” He worked extensively with Duran Duran on “The Reflex”, and their album Notorius, and throughout the 1980s producing albums for Mick Jagger, Jeff Beck, the Thompson Twins, Grace Jones, and the B-52’s (amongst others.) In the new millenium, Rogers worked extensively on film soundtracks, completed an autobiography, worked with French electronic band Daft Punk, earning 3 Grammy Awards for the worldwide hit, “Get Lucky,” and was inducted into both the Songwriters Hall of Fame and the Rock and Roll Hall of Fame.

If these accomplishments were not enough reasons for the broad smile spread across Rogers’ face, Rogers’ gratitude for being a recent cancer survivor, after a discouraging prognosis, makes it abundantly clear why he glows with positive energy and spirit, and wants to share this with his fans.  Thrilled to be playing for his hometown crowd at the iconic Capitol Theater, Rogers eagerly encouraged the audience to join his energized state and to sing and dance along to songs that most present have loved since childhood. During the hour and 45 minute set, Rogers and Chic played their hits, including “Dance, Dance, Dance,” “I Want Your Love,” “Le Freak” and “Good Times”, as well as the music Rogers collaborated on, including “We Are Family,” “Like a Virgin”, “Let’s Dance,” and “Get Lucky.” In a show of hit songs the star singers were Chic’s two female vocalists, Kimberly Davis and Folami. The voices of these women were phenomenal, with the word  “amazing” additionally added on for Ms. Davis, whose voice had unbelievable power and range and a beautiful tone.

For the musical finale “Good Times,” VIP members joined the band on the stage (what Rogers does at every show), heightening the dance party atmosphere of the night. Rogers obviously enjoyed being part of the energy and sharing himself with the fans, as he weaved amongst the crowd, singing and playing his guitar with eyes twinkling.  During the evening Rogers commented that he’s been asked many times to categorize his music, the music of Chic. His response was, “It is disco, it is R&B, it is funk, it is soul. It HAS soul.” And that is does. Rogers’ music has soul because it comes from a phenomenal musical talent, who embodies the word soul and wants to share it with everyone. I can’t think of a more uplifting way to spend an evening than in the presence of this positive spirit and soul….and that’s Nile Rogers. 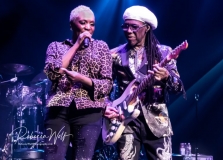 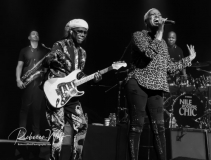 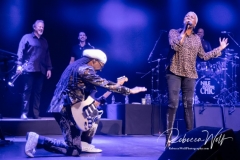 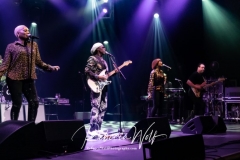 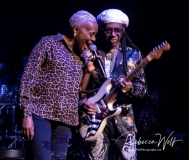 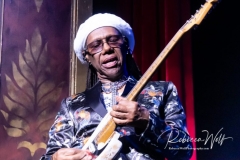