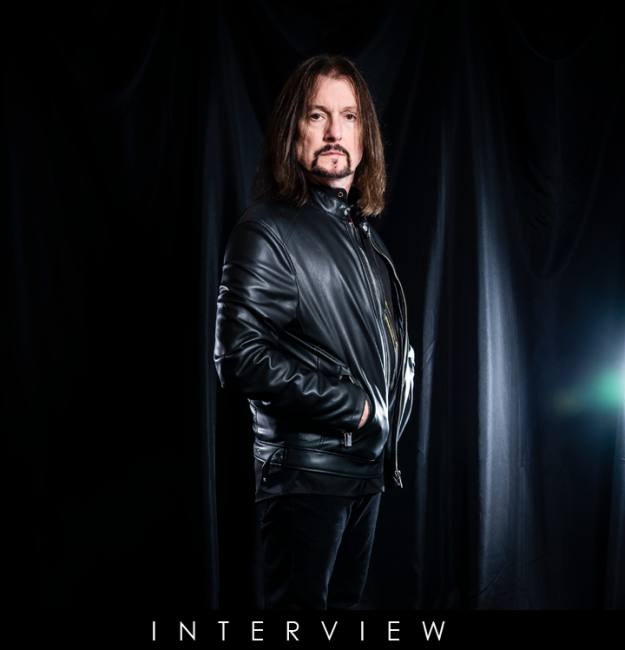 Jimmy Waldo has had a long and prolific career as the keyboardist and leader of the hard rock band, Alcatrazz.  Throughout our interview, Jimmy was very candid about the foibles of sustaining a band, being true to its sound and why he is re-releasing a double CD of his early 90’s hard rock band, Blackthorne. The first CD of this double release is “Afterlife” which has sustained popularity in the hard rock world, together with the never before released “Don’t Kill the Thrill”.  Under the musical influence of the latest legendary assemblage of Alcatrazz, their collaborative sound has naturally progressed into metal with the release of “V” in October. Fans are anxiously anticipating Alcatrazz’ European tour taking off this November. Click here to learn more about Alcatrazz.

Maria Passannante-Derr: It appears that Alcatrazz has been the mainstay throughout your  musical career and Blackthorne, for a variety of reasons, briefly lead the band down another path.

Jimmy Waldo: I had a band in the 70’s called New England. During that time, I lived in New York and met Bob Kurlick at a KISS show at the Beacon. Bob wrote several songs for KISS. We knew that we always wanted to work together. We lost touch for a few years. I moved to LA, did three Alcatrazz albums and some touring. He then moved to LA from New York. Alcatrazz broke up and Bob and I got back in touch and started writing. I wanted to put a band together. At that point, Graham Bonnet was in Australia but wanted to return to the United States so we got him back here. Then, I got Chuck Wright on the bass and Frankie Banali for drums and bass, started rehearsing and got a record deal. That was the formation of Blackthorne.

JW: Yes, very heavy hard rock; but, Grunge was a big deal at that time (circa 1992-93) so we didn’t do well. We were in the wrong place at the wrong time. We got a deal with a small record label but the album never really came out because they did not have the money to promote the record. We then got a deal from Polydor and a publishing deal from Sony, finished the record and got ready to record the sequel, “Don’t Kill the Thrill”.  At that point, lead vocalist Graham Bonnet left and it was just Bob and I. We got dropped from Polydor, got another deal in Japan with a smaller label and decided to do another record.

MP-D: So the never released part two of the of the double re-release is “Don’t Kill the Thrill”?

JW: The body of work of this current release, “Don’t Kill the Thrill” came from my tapes that were stored in my garage. I had all these boxes of masters and demos that were created in my home studio.  We were getting ready to move and my manager at the time, who was a big Blackthorne fan, coordinated putting the tapes together. It was necessary to have all of these analogue tapes baked, otherwise they would stick together and fall apart.

MP-D: Was “Don’t Kill the Thrill” an extension of “Afterlife”?

JW: Yes, basically. Bob and I wrote a lot for Blackthorne.

MP-D: What is the strategy behind the release of “Afterlife” and “Don’t kill the Thrill” at this time?

JW: There is no big strategy. People don’t make money from records anymore.  People don’t buy CDs because of streaming and downloading. It used to be, “Let’s get the big record deal,” and we would receive $200,000.00. New England wasn’t even a big band and Capital gave us a $250,000.00 advance. We would receive 2 to 3 to 400,000 dollars in advances back in those days. You had to make a record if you wanted to tour, but you also did it for your cut of that advance. You made the record for $100,000 and then lived on the rest. Nowadays, there is no record advance. You make a record and there is very little money in it.

I want these albums out there out there because I am very, very proud of these songs and I know Bob Kulick and Frankie Banali would have wanted this as well. Such a tragedy that Bob passed away a few years ago. I know he was proud of “Don’t Kill the Thrill”. It was such a great record and it is crazy not to have it out there. I want people to hear it. So, that is the strategy behind this double release,  just get it out there for personal reasons.

MP-D: My impression is that the Blackthorne sound is very significant part of your ongoing artistic musical journey?

JW: Yes, it is. In touring around the world we sold many “Afterlife” CDs. On a subsequent tour, in Spain, we opened up with “Afterlife” and a fan came up to me and asked me to sign his old, beat-up CD of “Afterlife”. I am looking forward to seeing people in Germany and England with the new double record and all these extra songs.

MP-D: Will you be playing Blackthorne songs on tour?

JW: No, the tour is Alcatrazz and new original songs.

MP-D: Your new Alcatrazz album, “V” (five) is scheduled for release in October.  How is it a different sound from Blackthorne?

JW: It certainly has more keyboards. With Blackthorne, even though I co-wrote most of those songs, they didn’t feature keyboards but that wasn’t the intent. Alcatrazz is more of a heavy guitar band. It’s all about the guitar player. At the same time, the keyboards play an important role, sometimes in just a textural way and sometimes in a very musical way where I play harmonies or lines with the guitar player. The songs I write are more keyboard oriented, but it’s a heavy band with heavy guitar players. I love guitar playing like that so even though I’m a keyboard player I really like that kind of playing. It’s fun for me. I like the challenge.

Our current guitar player, Joe Stump, is fantastic. He has taught at Berkley for years. When Joe writes songs it’s a really good piece of music. There is Gary Shea on bass and back vocals, Doogie White on lead vocals, Mark Benequechea on drums and me on keyboards.  It’s what Alcatrazz started out to be originally. Then we veered off course somewhere along the way. After a distance, it’s now back on track. This music, however, is heavier, a bit more progressive, a bit more power metal than what we have done in the past. It’s the way this group of musicians think and write and play. It’s a natural progression for us to do this. Doogie has been doing this throughout his whole career. He has always been in bands like this. It’s also more competitive with what is going on out there in today’s market. We are all on the same page. MP-D: What is the difference between metal and hard rock?  Is metal more minor scales because it is dark and hard rock more major scales?

JW: Well, metal is not as sleazy and slinky as some groove rock, like some early Aerosmith, which I love, but it’s a different style.  We’re definitely into the darker stuff whereas in rock, like Van Halen, and I love Van Halen, or Bon Jovi, it’s just not that dark. What we do is a lot darker, a lot more minor keys, darker melodies and chord changes.  You don’t necessarily have to play minor chords to make a verse progression dark. It depends on the melody on top of it and the way the singer is singing. And the lyrics, Oh my God, there’s so many bands that year after year and album after album, write the same lyrics and I think, ‘How any times can you write about that?’ I wouldn’t necessarily call our lyrics dark subjects but you wouldn’t find them in an airport.

MP-D: Is “V” a concept album or an album where each of you came together with your original songs plus some co-writing?

JW: It wasn’t like we wrote a bunch of songs outside and came together. Joe Stump and I have been putting songs together on the road for a year and a half. My computer system is with me all the times and we can record anywhere while on tour. After we accumulated a lot of demos, I went to Boston and we worked for a week recording more songs.

JW: Yes, the music got heavier and live it will be heavier and a little bit more in your face just naturally with the changes that have gone on. Faster and more furious.

MP-D: Do the vocals compete with the rest of the instruments or are they a blend?

JW: It’s a blend. Doogie is perfect as the “front man”. He has been doing this kind of music his whole career so he’s very good at it. Everything is about the song and the melody and the voice. Joes Stump is a song guy. Again, it’s all about the song and the changes and what works, always with the singer in mind.

MP-D: Anything plans for future endeavors and projects with this group?

JW: Not now, I’m just gonna tour this one out.  I love what we’re doing. I love the people I’m working with so if it works, don’t fix it. Overlapping projects are stressful for me, trying to do it all at one time. I want to concentrate on practicing right now for the tour, really learning the songs, programming, getting all the material together as a keyboard player. When we show up at rehearsals, we have to know the songs cold. We don’t sit at rehearsal and say “let’s play it again. I don’t know where’s the chorus comes in”. Right now, it’s all about Alcatrazz. I don’t have any plans for anything other than maybe some more writing.  The fact is that Alcatrazz has changed and now we’re slipping into metal a bit but it is good to change, good to grow.

MP-D: Over your long and very productive career, what have been your musical influences?

JW: My influences go back to Cream, Hendrix, The Who, Led Zeppelin and the Beatles. Those are my big influences. Seeing The Who live was a life changer for me. Townsend kept moving around and Keith Moon was climbing on his drum kit, broke a few things but he was more funny than anything. They were super entertaining. I didn’t get to see Cream and Hendrix live but I love them. I love Zeppelin.  John Paul Jones, known for his bass of course, is an incredibly underrated keyboard player. I don’t listen to a lot of music these days because I’m doing music all day every day. I’m here practicing writing, programming sounds and stuff like that.

MP-D: What inspires you as an artist year in and year out?

MP-D: Is there anything else you would like the readers and your fans to know about you either personally or professionally?

JW:  Personally, what you see is what you get. I do not claim to be something I’m not. I don’t try to do anything that that I shouldn’t be doing. I love music and I love what I’m doing. Professionally, I just want to be able to tour and make records. Touring is my passion. I love to do it.