The 50th Anniversary Jethro Tull concert started at the Beacon Theater, September 11th, with the old fashion TV that looked almost real. News reels from the 1960s flashed on the screen including scenes from the vietnam war, flashes of newspaper articles on Jethro Tull’s musicians and scenes from live performances. The audience, dominated by people who grew up in that era, exploded as the band took the stage. They continued to be warm and enthusiastic throughout the celebration of the band’s 50 years, led by Ian Anderson, the only original band member.

The band began with the early work and progressed through the years. The show was peppered with video cameos of former band members, and other prominent musicians, requesting songs and lauding Jethro Tull. Videos of musicians including Joe Bonamassa, Tony Iommi, Slash, Jeffrey Hammond-Hammond, Mick Abrahams Joe Elliott, John Evans (dressed as a flower), and more, added to the retrospective look at Tull’s history. There were also videos of past Tull performances of seemingly the same songs we were hearing. Although it was an interesting contrast, I found it a distraction which left me wishing I was seeing that performance rather then the one in front of me.

Speaking of the performance in front of me, I was very impressed with Ian Anderson. His flute playing was tremendous and he danced around the stage with boundless energy. Although his voice struggled a bit, his performance, and the fact that he is Ian Anderson and still doing this at 71 years old, made up for that. His signature leg kicks and stealth moves were abundant and I never tired of seeing them.

What surprised me most about the show was the lack of support from the band. While Anderson was running around the stage, his band, David Goodier (bass), John O’Hara (keyboards), Florian Opahle (guitar), Scott Hammond (drums) all seemed to be standing still, playing their parts competently but without the passion and fire present in the original performances. There was a little more life in the second half of the show, but still not what it could have been. At one point, I stepped out of the theater and heard a female voice join the group. I was intrigued and went back in only to find that the woman, along with a couple of men, were floating heads singing on the video screen in unison with the band. Talk about “phoning it in!” This WAS phoned in. Literally.

They used this effect again at the end for the much anticipated song Aqualung. An uncredited singer alternated with Anderson for a powerful duet. His voice was strong and a great accompaniment to the song. I found myself wishing that he was physically on stage singing, and that he had joined them earlier in the night. They also could have used a few more musicians, or backup singers working together so that at the end of the show, Ian Anderson wasn’t the only one sweating.

Review and photos by Fredda Gordon 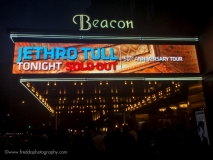 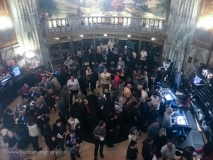 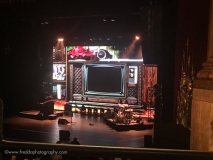 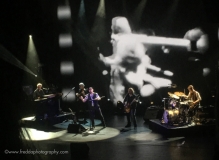 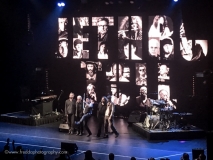 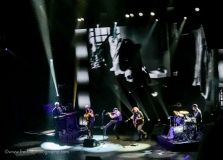