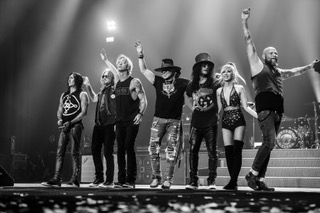 ROCK LEGEND GUNS N’ ROSES BACK IN EUROPE IN 2022

With more than 100 million albums sold, as well as completely sold-out open-air performances and festivals, Guns N’ Roses are and remain one of the most important and influential bands in music history. They are considered the benchmark for live performances in rock’n’roll. In June, the super group will present their celebrated mammoth show with all the hits and anthems at a stadium show in Munich. The record-breaking concert series brought 1.6 million fans to their feet in 2017 and 2018 with its impressive stage show in Europe alone.