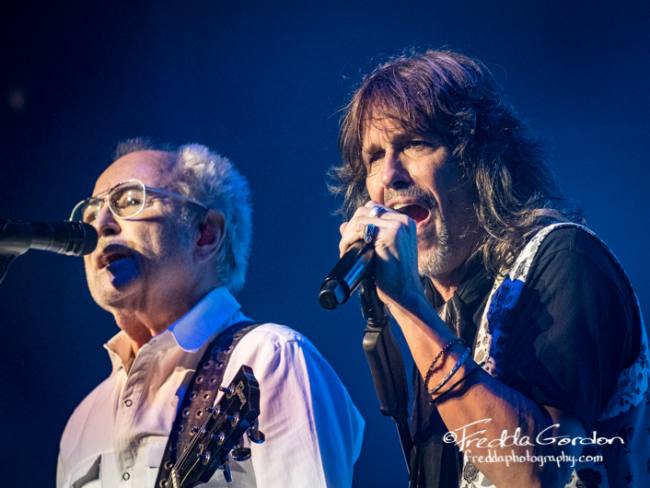 After interviewing Tom Gimbel (Click here for interview) I was intrigued by this latest Foreigner tour. I got to see them perform tonite at the Mohegan Sun Arena in Uncasville, CT, a fun place to see a show. It was a special night because they were joined by some former band members. Foreigner is still going strong after 43 years and it was great to see lots of years of contributors side by side. Watching the current band members play with past members Ian McDonald, Rick Wills, and Al Greenwood was heartwarming. The new members showed their respect for these musicians and a sense of family came through.

“The boys” as lead singer Kelly Hansen called them, Mick Jones (founder of the band, sound synthesizers, guitar), Thom Gimbel (guitar, keys, sax, etc.), Jeff Pilson (bass), Michael Bluestein (keys), Chris Frazier (drums), and Bruce Watson (lead guitar) bounded across the stage throughout the show energizing the other performers and the crowd. As for Hansen, his energy was especially contagious. If you don’t know better you may mistake him for a younger Steven Tyler, scarf and everything, which somehow works for this band.

In the interview Gimbel noted that they found a drummer that really fits and he wasn’t exaggerating. Frazier was amazing provided a deep steady beat that really moved. The whole band worked together shared their talents to bring to life many of Foreigner’s hits including Cold as Ice, Head Games, Juke Box Hero, Headknocker, Sad Monday, Waiting for a Girl Like You, and Urgent. It was gratifying to see Gimbel wail on Urgent with his famous sax solo, hitting the difficult notes effortlessly. Throughout the night entire audience was on their feet, dancing and singing every word to every song.

They sang their biggest hit, I Want to Know What Love is, with a local high school chorus joining them onstage. They introduced the song talking about love and then requested audience members put their arm around the person next to them for the song. One audience member said “I had my arm around some stranger for 5 minutes and it was fun and a good idea!” It was a great way to bring people together, share their connection and add warmth to the show. And, a great show it was! 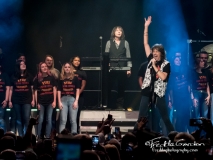 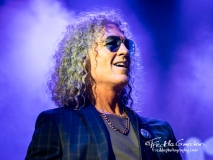 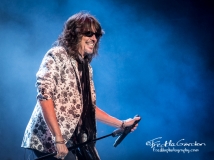 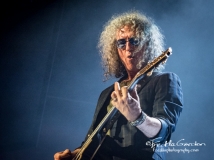 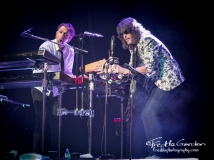 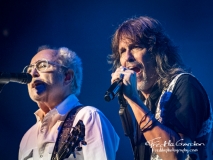 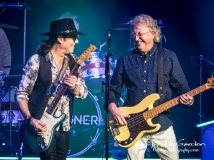 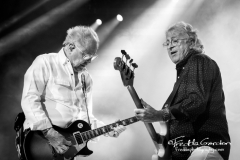