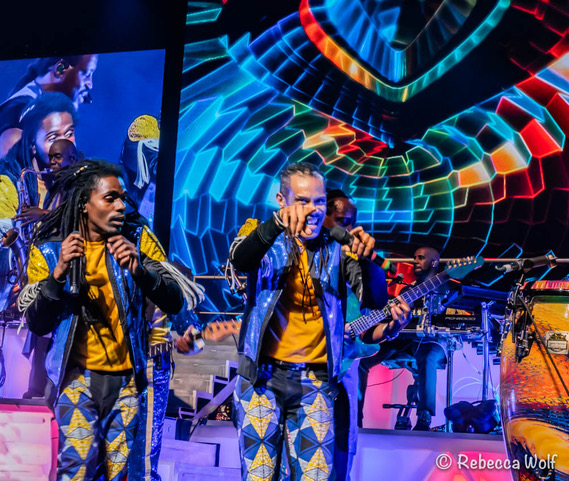 The mood at the Earth Wind and Fire concert at NJPAC on 6/5/18, was as energetic and enthusiastic on stage as it was in the packed house. The band, including the three remaining original EWF members, Philip Bailey, Verdine White and Ralph Johnson, sang, danced and partied with their adoring fans with the same passion, after 40+ years, as bands on their first tour. From the moment EWF burst onto the stage, in their flashy sequined attire, their love for sharing their music with fans was extraordinarily apparent. In addition to the original members, the band includes David Whitworth, Myron McKinley, John Paris, Philip Doron Bailey, Morris O’Connor, Serg Dimitrijevic, and the EWF Horns.

Philip Bailey, lead singer for most of the show, continues to have a beautifully smooth, rich voice, whether the song is upbeat or a ballad. Most astounding about Bailey’s voice is his range. The piercing high notes he’s able to hit are apparent when he sings “Reasons”. When Bailey let go of the final note to breathe, the audience’s gasps turned to thunderous applause, and his grin appeared to say he’d even impressed himself.

While Bailey’s enthusiasm was evident throughout the show, it never equalled the effervescence displayed by the high-kicking, expression-filled Verdine White. Many people consider the bass player’s role as solely adding a secondary layer to the music, and bass players are often outside the spotlight. However, not Verdine White. At times, it was hard to draw you attention away from White, with his unbridled jumps, twirls and comical expressions.

Ralph Johnson, though less theatrical, seamlessly moved between vocals and sharing percussion duties with one of the longest members of EWF.  B. David Whitworth has been with EWF since 1996, as a percussionist and vocalist, sharing lead vocals with Bailey on several numbers. Beyond his phenomenal singing, his dancing and command of the stage were eye catching. Whitworth’s  dancing “partner”, equally displaying boundless energy, while singing and playing percussion, was Philip Doron Bailey (Bailey’s son). Since 2008, the younger Bailey has joined his father in bringing EWF’s music to adoring crowds at every tour stop. June 5th at NJPAC was no different.

The excitement in the crowd was present throughout the evening. However, when the band began to play “September”, not a soul remained seated. Prudential Hall, has four tiers of seating, rising four stories above the stage. I looked in amazement at the thousands of people dancing and singing above me. Directly in front of me sat the security guard, with his back to the stage. Throughout the show he sang along to every song, and I smiled to myself, as I noticed him glancing over his shoulder at the stage on several occasions. As the crowd stood singing “September”, the guard looked at the upper tiers in awe, “It’s a party!” he laughed…it was! One I hope to attend again.