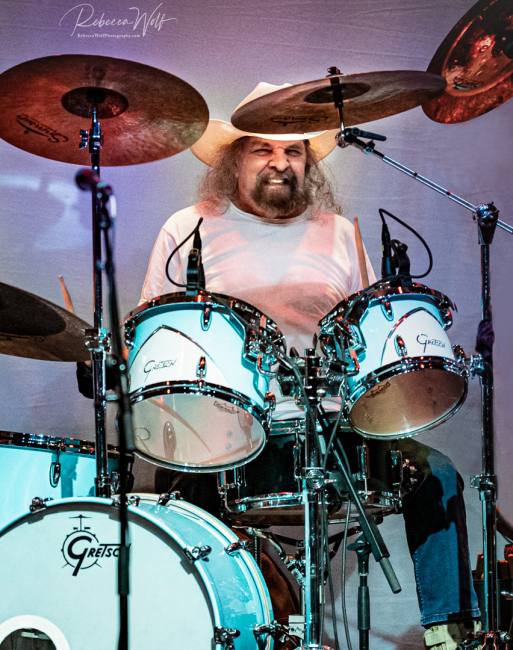 Artimus Pyle arrived with his band to a packed house at The Newton Theatre on November 25th. After a Thanksgiving Day of food, family, and Black Friday shopping, these devoted fans were ready for some rocking Lynyrd Skynyrd music, performed by the band’s legendary drummer and bandmates. The energy and excitement were immediately apparent from the bustling lobby, into the theater, as fans socialized in the aisles and eagerly awaited the start of the show. A staff member informed me that in the hour prior to door opening they’d just sold 50 tickets… “it was crazy!” she said.

Before the Artimus Pyle Band began their Southern rock and roll performance for their adoring crowd, the stage and theater were brought to life by the music of the passionate, energetic and proudly American George Becker and his band.

George Becker, singer-songwriter and guitarist, is the founder of the rock band Jaded Past, which released its debut album in 2012. A decade later, Becker released his first solo country album in 2022, as well as several single releases. At The Newton Theatre, Becker hit the stage emblazoned with patriotism, with a flag wrapped around his mic-stand, a white flag printed on his black t-shirt and patches of stars and stripes adorning his pants.

Performing several songs from Jaded Past’s 2016 rock album, Believe, including “Tattered,” “Be My Lady,” and “Whiskey Dreams,” Becker’s powerful, gritty voice was well-suited for the energetic, spirited numbers. Additional songs in the setlist included ones Becker’s released as a country crossover solo artist, including ”Songs Left in It,” from his 2022 self-titled country album, as well as his single “It’s All About Freedom.” These songs were not lamenting country ballads but passionate country rock anthems, that had guitarists Pete Fry, Jon Giesler, and bass player, Leo Sabatino, jamming in full-force, along with the dynamic beats of Pete Giordano’s drums. The audience joined in Becker’s enthusiasm, as he spoke about his love for being an American, and rocked with the band throughout the 30-minute set.  Now, with spirts at an even greater height the crowd was primed and ready for the Artimus Pyle Band.

From the moment Artimus Pyle emerged on stage, with his signature cowboy hat, white t-shirt and long curls, the audience was on fire. The electricity in the crowd remained throughout the evening as fans cheered, danced in their seats, and sang along to 90-minute set of Lynyrd Skynyrd favorites. The evening opened up with “The Needle and The Spoon,” from Skynyrd’s second album Second Helping. Additional songs from the album included “Call Me the Breeze,” “The Ballad of Curtis Loew,” “Swamp Music,” and the band’s highest-charting single, “Sweet Home Alabama.”  Of course, no performance of Lynyrd Skynyrd music would feel complete without hits from the band’s self-titled debut album Pronounced ‘Leh-‘nerd ‘Skin-‘nerd, including “Simple Man,” Gimme Three Steps,” and the beloved “Free Bird.” However, whether the songs were radio hits or not, to the devoted Skynyrd fans at The Newton Theatre, every song was a favorite and worthy of the energetic accolades.

This positivity in the crowd was matched by the electricity on stage.  Each musician performed with passion and skill, as guitarists Jerry Lyda and Scott Raines jammed alongside bass player Dave Fowler, creating a powerful trio of electric guitars. Raines, on vocals as well as guitar player, was the consummate performer, as he made his way about the stage and demonstrated his thrill at performing through the multitude of expressions on his face. However, if one wanted to witness joy personified, then one had to look no further than Dave Fowler. Fowler played bass not only with heartfelt passion, but with a look of joy equivalent to a child on Christmas morning. You couldn’t help but smile along with Fowler, who appeared enthralled to be performing this legendary music with the Artimus Pyle Band. Brad Durden on keyboard and vocals, beautifully showcased his warm, rich voice throughout the performance, and of course the iconic Artimus Pyle, though “hidden” in the back on his drum kit (like all drummers) could never be missed with the intensity of his passion and skill.

The high spirits of the evening were especially important for a group of individuals hailing from Mahwah, NJ who came as a memorial to Joe Ulrich, a 39-year member of the Mahwah Fire Co. 2, and retiree from the Mahwah DPW, who passed away on 10/8/22. “Where’s my Mahwah group?” Lyda queried the crowd. As friends and family stood and cheered, the band performed and a slide show paid tribute to the life of Joe; a beautiful tribute to a man with a life of public service and a love for the incredible music of Lynyrd Skynyrd.

The encore brought the band back on stage for “Free Bird,” a song that has grown to have a life beyond anything Ronnie Van Zant probably could have imagined. While the song was released 50 years ago, it remains as iconic now, and has become a staple of American music and culture. As the band performed all audience members were on their feet, in the aisles, singing, and joining in the energy and passion that “Free Bird” engenders.  On the day after Thanksgiving, a day of reflection and gratitude, music and the artists who create it, are surely something to give thanks for! 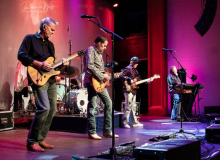 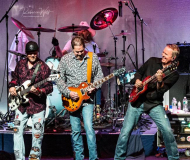 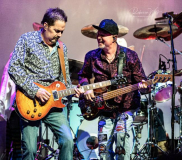 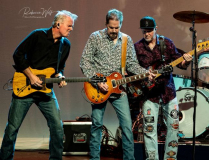 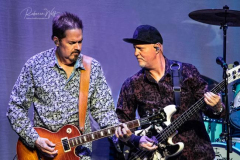 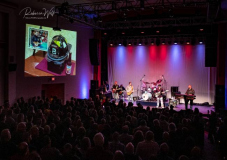 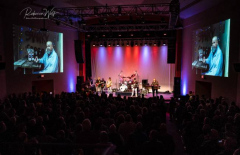 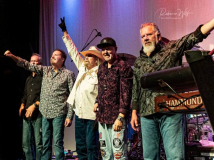