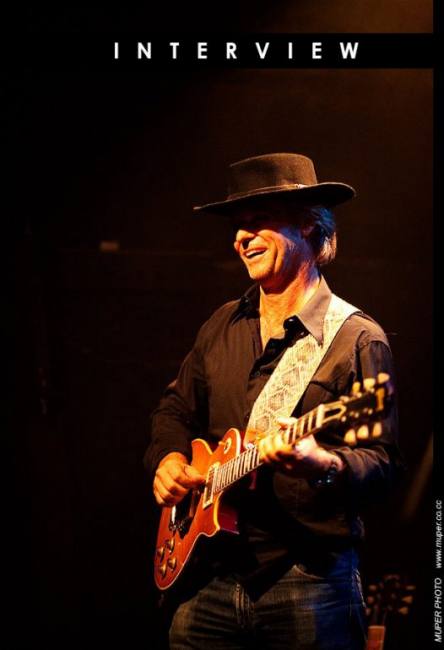 Andy Watts, known as the “Ambassador of the Blues for Israel” is an influential Israeli musician. He started listening to American Blues when he was twelve years old. It was then that he became hooked on the repetitive pattern and vibe of American Blues.  He picked up a six string, learned a few basic chords from a friend and has been writing and performing ever since. He performs solo and with his nine-piece band, “Blues on Fire”. His mission is to bring American Blues to Israel and in doing so, he has played and recorded with some of the greatest American Blues musicians: Joe Louis Walker, Kenny Neal, Rick Estrin, Lucky Peterson, Johnny Winter, Eliza Neals and Bernard Alison.

Maria Passannante-Derr: How did you come to be known as the “Ambassador of the Blues for Israel”?

Andy Watts: It has and continues to be a work in progress. It is not an appointment by the Israeli government; but, for the past fifteen years, I have brought some of the best blues musicians in the world to Israel. The plan was to enlarge the audience and showcase the quality of American Blues. In the process, it has been a great opportunity for me to play with these artists.  Over the years, it has been so much fun that we have recorded tracks in the studio.

MP-D: Is “Blues on Fire” your touring band?

AW: “Blues on Fire” is my nine-piece band and the name of my show. I also released an album of that name in 2018 where Joe Louis Walker did the vocals on the title track.

MP-D: I read that one of the biggest influences on your music is Peter Green?

AW: Yes, his minimalist approach appealed to me because it is more difficult to play less and say a lot and he managed to do that. I have listened to American blues programs since I was 12 years old.  I never formally studied so I probably break all the rules. I have developed my own approach to the guitar and it works for me as my style of writing and performing. AW: Yes, even with all the great influences like Peter Green, Hendrix, Albert King, you still have to find your own sound. I did few covers on “Supergroove”; but, it is not “cut and paste”. I put my own twist on the music so it identifies with the band sound. I think the challenge for any artist today is to be able to renew yourself but still somehow, sound the same so the listener identifies with you.

AW: I always like to kick off my shows with an instrumental and take off from there.  “Supergroove” was a riff in the back of my mind but I wanted something catchy, like the groove and vibe of Johnny Winter, Albert King and Freddie King who started in Texas with the great instrumental bands. Then I added the vocals, the hammond and the horns. I really like the big, bold, low mid-tones of the baritone sax. It suited the track and gave a good balance to the song.

MP-D: You end the album with a cover of a Peter Green instrumental?

AW: I started the album with “Supergroove”. It’s energetic, it’s the whole band, its guitar and its full throttle from the first second! I knew that after all the songs on the album, I wanted to land at “Supernatural”, not only because of the name association with “super” but it seemed to be a natural way to end the album. That song is very spiritual to me. It’s a haunting, introvert, beautiful instrumental that Peter Green, may he rest in peace, did on the ‘67 John Mayall Bluesbreakers album, “A Hard Road”. You have to be on top of your game to play that song, in the zone because it requires long sustained notes. I changed it a bit, added a trumpet, trombone and sax. I am blessed with a great horn section who are all professional musicians who assist me with the proper arrangements.

MP-D:  You have performed with many of the modern blues greats, like Joe Louis Walker, Kenny Neal, who co-produced your album, Lucky Peterson, Johnny Winter and Rick Estrin. That is quite a career so far.

AW: That is part of playing and paying my dues for earning my title “Ambassador of the Blues for Israel”. For example, Joe Louis Walker has been to Israel three times. He is a dear friend, so much experience and has done so many incredible things in his life. I love him dearly. He is the reason that I play a long guitar intro on ”Straight Shooting Woman”. On a prior album, he advised “don’t fade out and don’t be afraid to play. In America, people love the electric guitar! Just play your guitar!”

The amazing Kenny Neal and I hit it off and ended up co-producing “Supergroove”. Rick Estrin performs on “Don’t Take My Blues Away” and “Living Hand To Mouth”, ironically, when we were living hand to mouth. I was thrilled to have him on board.

MP-D: There is also the talented Eliza Neals singing “Blues of the Month Club” on “Supergroove”.

AW: I have played that song many times with Joe Louis Walker. He recommended Eliza Neals. He said, “she has good pipes”. I added a horn section. I did a different attitude on the guitar and took the song up a step for a female vocalist. She did a tremendous job. She really brings a great interpretation to the song and It added another dimension to the album.

MP-D: “Supergroove” continues to be your approach of collaboration with these tremendous blues talents. I am referring to the Denny Shoshan vocals on “Straight Shooting Woman”.

AW: Denny is a veteran musician/performer and formerly a member of a famous band that Queen opened for in London. He was on the same bill with Hendrix in Hamburg in the 60’s. He is currently a member of “Blues on Fire”. MP-D: Where do you tour and what are your plans?

AW: Europe mostly. Right now, we are reassessing to see where things will take us, looking at festivals in Europe, riding this wave of the tremendous reception that “Supergroove” has received. I did my last show on March 11th. I am tremendously thankful for this album which is a project in of itself. I am busy all the time promoting “Supergroove” with interviews and interacting with fans all over the world.  I have also used the time to write another new album and will, in the future, bounce ideas off of Kenny.

MP-D: You are a producer, a songwriter, an arranger and a live performance artist and we have already discussed some of the songs on “Supergroove”. I want to discuss a very interesting track called “Don’t Take My Blues Away”, first, because of that raspy voice of Roy Young and second, because of some of the lyrics, “You know my faith is strong, nothing can go wrong”.

AW: Everything I have written, is before Covid but it is relevant today. Look at a song, like “Living Hand to Mouth” which is relevant now. When Kenny came to Israel, part of his, and other visiting musicians’, Israeli experience is that you have to endure three shows with me! I was traveling with Kenny; and, this of course, led to him co-producing the album. We were having a drink in Jersusalem and listening to some my music and he said, “Andy, wait a second, everyone wants to get rid of the blues” and you say, don’t take them away”.  I firmly believe that you should preserve the few things that are precious in life and keep and treasure everything that you value and not let someone take it away from you. The only way to do that is to have a strong belief and have faith.

MP-D: What inspires your creativity?

AW:  I avoid writing “lockdown blues” or something with a clear direction to it. I like to write grey, not white nor black. It’s up to the listener to interpret the lyrics that suits his reality. I give a map, with hints, first a chord progression or a riff. I like to see how the melody is going, then find lyrics suitable to the melody as well as to the attitude and vibe of the song.

MP-D: What else would you like your fans to know about “Supergroove”?

AW: I chose “Don’t You Let Me Down” because it is a song with a very psychedelic sound with cool vocals and I feel that it just suits the album. “Raw” is in the album because of the name “raw”. I wanted to make one song that is a bit more pure, a bit more rock n roll, four minutes in your face of pure adrenaline where I can showcase my Gibson, Les Paul sound intro and my Stratocaster for the solo. By going that high, it is only natural to chill down and slide out with “Supernatural”.

MP-D: Why are you posing with a rhino on the front cover photo?

AW: That photo was shot in  a very cool neighborhood  in Tel Aviv called Florentine. It is a hipster neighborhood like Williamsburg in New York City where there is a lot of graffiti. As an artist, if people ask questions, then you are succeeding in what you are doing. So, if I put myself on the front cover with a rhino, I am sure people will ask “Why?”

MP-D: What advice today would you give to your younger self 20-25 years ago?

AW: Blues is one of those musical structures that ages best with time. If I could today, meet myself 20-25 years ago, I would say “Don’t rush, take you time and don’t play every note. Keep space between the notes. Concentrate on getting a good sound.”  You start with the sound and then you focus on what you are going to play. “Burning Deep” is a good example where the sound really comes together on the album.

MP-D: Yes and great lyrics as well … “You know you bring out the best of the worst in me.”

AW:  It applies to all relationships, people just manage to bring out the best of the worst in others.

MP-D: Is there anything else you would like your fans to know?

AW:  The best time in your life is always now because you have no alternative and you have to deal with what you have now. The only way we are going to get through this is if we all pull the same way together because this virus in very democratic. It is affecting everybody. I am a firm believer that 2021 will look better; and, in 2022, I hope we can look back and say, you know, it was a test for humanity. We failed in the beginning but in the end we pulled together and we came through it better than ever.

Recorded at Kibbutz Ma’abarot in Israel

“Don’t Take My Blues Away”

Please use the following links below to access all things Andy Watts: