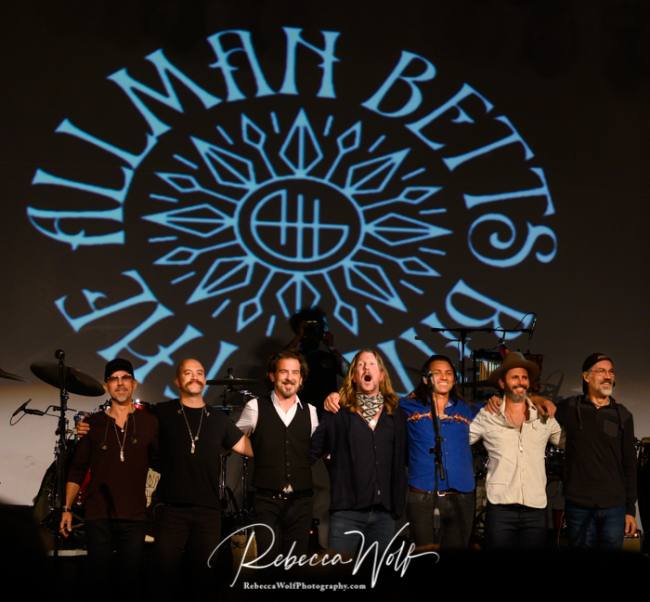 I am a lover of classic rock, whether it leans towards pop rock, folk rock, southern rock …. (just not hard rock.) Generally, if it’s connected to the 70s, I love it. Seventies rock still brings me back to a long gone time and place and evokes poignant memories and feelings. I believe music can do that for everyone. Just like our favorite music can have us frozen in an era of time, we have the tendency to think (wish maybe), that our musical icons are frozen in time as well.  Getting a glimpse at them as elderly individuals can be quite jarring, and is a reminder of our own aging. It’s become even more upsetting recently as we’ve started to lose a number of our rock and roll heroes.

It’s been a challenge as well for those of us raised on rock and roll (music played by actual bands), to witness the current changes in the music industry and how it’s often created and performed today. While a musician might play the guitar, or a piano, it is exceedingly rare to see musicians forming bands, creating music together and performing as a unit. Today music is often generated by computers; electronics fill in the spaces where musicians once played. A DJ may be seen stage left, occupying the space where a keyboard player used to run his fingers across the keys. Dancers may fill the concert stage behind the lead singer, where guitars players and percussionists would previously jam.

Times change and we all need to accept change….however, we don’t have to like it, do we? That’s why the concerts that have continued to be my favorite are those of my beloved classic rock artists. However, what I’ve recently been thrilled to experience are a few “younger” musicians (a generation down from our 70s icons), who still play music in a band….who want to hold onto the rock vibe and legacy. These musicians don’t want to just play music of the past generation, they want to create their own rock and roll. While their music may have the vibe many of us classic rock enthusiasts cling to, it’s also a sound and feel that’s all their own.

One of these bands I’ve been fortunate enough to experience is the Allman Betts Band, a band formed by the off-spring of the Allman Brothers Band, including, Devon Allman, son of Greg Allman, Duane Betts, son of Dickey Betts and Berry Oakley Jr., son of Berry Oakley. These musicians have joined creative forces to honor the legacy of their fathers’ music, while forging ahead to create a name (and music) all their own. Embarking on their first worldwide tour in March 2019, the band released their debut studio album, entitled Down To The River in June. The album, recorded at the famed Muscle Shoals Sound Studio also includes songs from the solo projects of Devon Allman and Duane Betts.

From the moment the band members stepped foot on the stage at the Sherman Theater there was a spirited but also laid back vibe to their sound….each song possessing a level of depth and soul. Whether the songs were higher energy like opening numbers, “All Night,” and “Shinin’” or more melodic and intense, like, “Down to the River,” and “Autumn Breeze,” you were apt to find found yourself lost in the music, the moment, and the feeling.  Allman’s voice is the perfect combination of Southern grit, mixed with full, warm richness. It’s a voice that catches your attention and draws you in with its power and soul.

Betts, taking the lead on the band’s longest song, “Autumn Breeze,” showcased his incredible guitar skills alongside master guitarist Johnny Stachela, with his fast picking, lightning quick chord changes, and slide guitar moves.  These gentlemen are guitar players to their inner core, and their emotions emanated through the vibrating strings of their instruments. The connection between the musicians was clearly visible throughout the performance…an  ease amongst them.  Upon introducing Oakley Jr. to the crowd, Allman called him, “my soul brother,” and Betts, “one of my best friends.”

Oakley Jr. demonstrated passion and skill on the bass and obvious pleasure at being part of this musical family.  Completing the band were  percussionists R. Scott Bryan and John Lum, and keyboardist, John Ginty, all phenomenal musicians, whose skills added rhythm and soul to the music. The songs easily flowed from one to the next, including an impassioned cover of Prince’s “Purple Rain,” with a backdrop of brightly lit, purple falling rain. The colorful lights and images throughout the performance added a visual experience to match each musical piece.

Throughout the evening, the packed crowd at the Sherman Theater was vocal in their enthusiasm for the band….cheering and singing along, with arms waving in the air. The audience’s passion did not go unnoticed or unappreciated by Allman, who repeatedly announced to the crowd that he loved playing in this venue and would definitely return, if everyone in the crowd would as well. The thunderous applause were a definite sign that all present surely agreed. 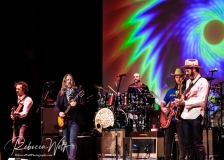 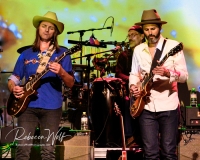 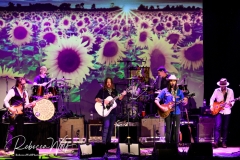 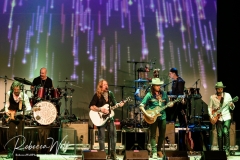 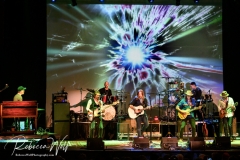 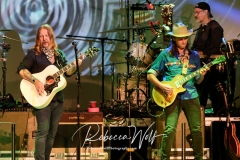 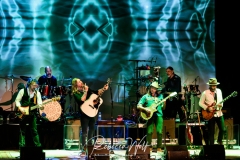 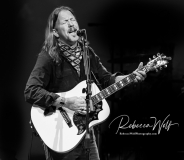 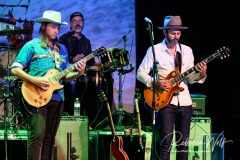 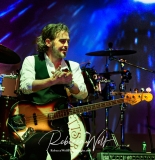 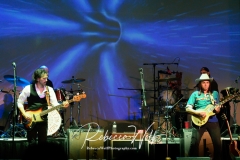 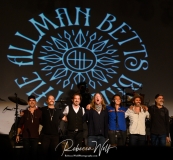 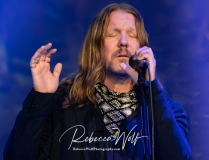