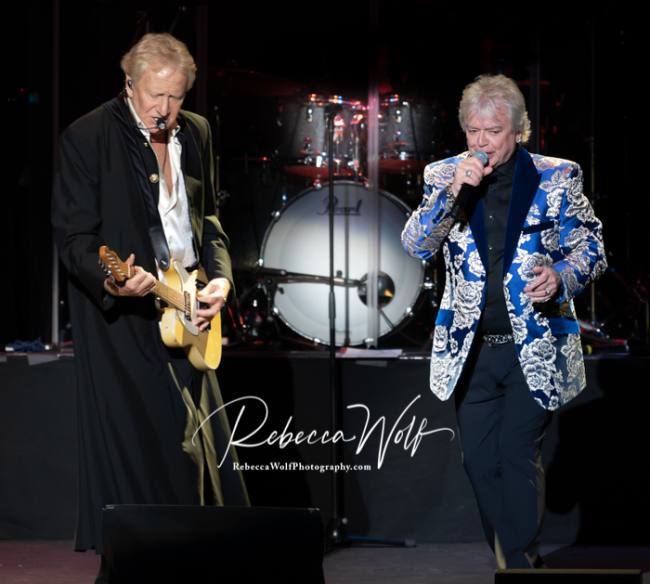 Having had the distinct pleasure of attending two Air Supply shows in February, in addition to several in prior years, I can honestly say Graham Russell and Russell Hitchcock’s performances remain stellar, even 45 years after first joining forces. Having met in Australia in a production of Jesus Christ Superstar on May 12, 1975, Hitchcock makes a proud point of highlighting this date to the audience, as it is so meaningful to them, both personally and professionally. When Hitchcock introduced Russell to the Bergen PAC audience as “my best friend”, the already present feeling of warmth created by the duo and their music, skyrocketed to another level. How special is it to know that the heartwarming vibes, and loving connection being transmitted to the audience is born out of a deep bond of friendship, one that has kept these two on the road for 100+ shows a year for 45 years.

Although recently there have been a number of bands on their 40th – 50th year anniversary tours, the majority of these bands have struggled with periods of internal strife, leading to changes in group members and/or extended breaks and reformations. However, this is not the case with Air Supply. As Russell and Hitchcock confirmed at the Count Basie Theater, the two have never had a fight in their 45-year musical partnership/friendship. This incredible friendship is hinged on the tremendous respect each has for one another and their individual skills. While Graham praised Hitchcock’s beautiful voice, Hitchcock gave accolades to Graham for his incredible songwriting. Hitchcock, the voice of the band, has maintained the ability to belt spectacular high notes, that leave audience members with chills and hearts skipping a beat. Graham Russell, the gifted songwriter, has created the foundation upon which this band has been able to build their musical success, with his beautiful music and lyrics.

Air Supply has a highly devoted fan base, no matter where they travel, and their shows are continuously sold out. And, why not? Their music is heartwarming, uplifting, memory-provoking, and all about love. Isn’t that the most beautiful thing life has to offer? From the moment these gentlemen crossed the stage at both the Count Base Theater and Bergen PAC, the energy in the crowd was electric. From shouts of love to Hitchcock and Russell, to cheers at their verbal communications, to enthused singing along to each power ballad, these fans were enthralled. With a catalogue of hits, including, “The One That You Love,” “Two Less Lonely People in the World,” “Even the Nights Are Better’” and “The One That You Love,” there was no lack of music for the audience sing along with.

If Hitchcock and Russell’s interactions with the crowd weren’t already at a peak, the two descended the stage during “Here I Am, ” walking down the aisles and connecting with fans while performing. Making themselves accessible to their adoring fans is an indicator of how much the fans really mean to these musicians and why their songs of love feel so authentic…..because Hitchcock and Russell are authentic.

During the evening, as Hitchcock took a brief leave from the stage, Russell showcased his songwriting abilities beyond the realm of romantic love, while demonstrating his own vocal strengths. “Fathers often don’t have songs written about them,” Russell stated. Playing his acoustic guitar and singing his sweet, tender ballad, “Son of a Father,” Russell honored his father, and those fathers in the crowd. Beyond songwriting, Russell is also a poet. All song lyrics can be considered poetry. However, as a prolific writer, who began with a love of words at the age of 11, Russell has feelings to share beyond his music. He expresses these feelings in his poetry. One could hear a pin drop in the packed venue, as in a gentle and soothing voice Russell recited his poem, “Am I,” an individual’s expression of identity and devotion.

Don’t let the fact that the band plays love songs fool you.  One just has to watch the fantastically intense guitar playing of the band’s lead guitarist/ musical director, Aaron Mclain, as well as keyboardist Mirko Tessandori, bass player Doug Gild, and drummer Aviv Cohen (who was absent at Bergen PAC but had an amazing fill-in), to know that these musicians all have tremendous talent and skill.

After 45 years, there are not many bands who are able to continue doing what they love, with a devoted fan-base who wants to share in their journey. Air Supply is able to do so not  solely because of their incredibly beautiful music…that’s the foundation. I believe they have kept their dream alive due to the love and connection they share between themselves and the love they project to their audience. It’s the authenticity that makes Air Supply and their music real, and gives fans the opportunity and permission to feel. So, if you have the chance to attend an Air Supply show, come ready to sing along; come ready to possibly shed a tear; and come ready to leave feeling alive. 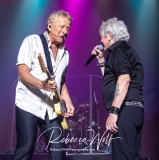 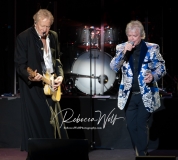 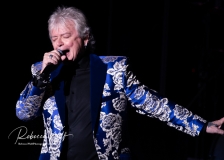 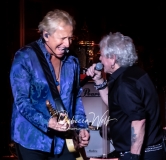 Review and Photos  by Rebecca Wolf