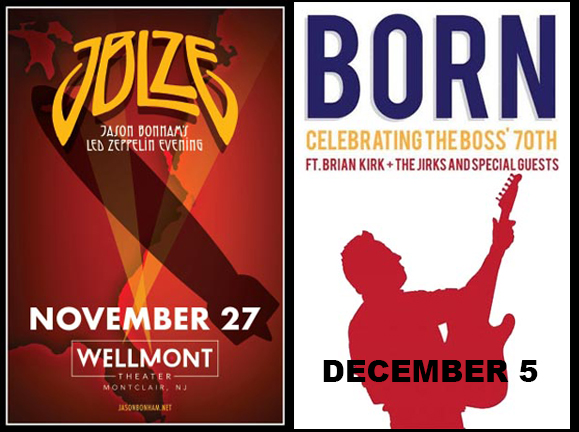 World-renowned drummer Jason Bonham brings his popular and critically acclaimed concert – which celebrates the life and music of his father, the legendary Led Zeppelin drummer John Bonham – to the Wellmont Theater this November.

The artist’s “Led Zeppelin Evening” is a riveting rock concert with iconic songs of the Mighty Zep, stunning atmospheric video and light effects. The show highlights the unique history that Bonham shares – in commemoration of his father – with the legendary rock n’ roll band. The band’s powerful live performance of Led Zeppelin’s classics takes concert-goers through a mesmerizing visual and aural journey as giant backdrops display iconic art, and Bonham’s own historical video footage, photos and stories give the show an intimate feel.

Brian Kirk & The Jirks present an evening celebrating the 70th birthday of Bruce Springsteen. Join New Jersey’s premier rockers – and a cavalcade of ‘Jersey Shore favorites – as they celebrate this milestone birthday for the state’s “native son.” “Born,” a title borrowed from two of The Boss’ best-known anthems, promises to be a celebratory night of rock that expands and salutes the Springsteen catalog.

Formed in the early 1990s, Brian Kirk & The Jirks are a premium nine-piece band specializing in interactive, high-energy music. The band’s front man has been gaining fans with his hilarious antics and infectious personality. With an endless song list, the band prides itself on packing the dance floor and creating unforgettable musical moments.

The evening will feature special guests and timeless hits like “Thunder Road,” “I’m On Fire” and “Because The Night,” among others. The Jirks’ front man, Brian Kirk, says: “I went from asking my sister who the ‘strange man with the earring’ was on her poster, to learning ‘Thunder Road’ and playing his songs on the guitar – and performing them in front of crowds. It’s quite an honor to celebrate The Boss, and I’m thankful for it.” Be a part of this North Jersey birthday jam!

Both shows are at the Wellmont Theater, 5 Seymour St., Montclair, N.J.