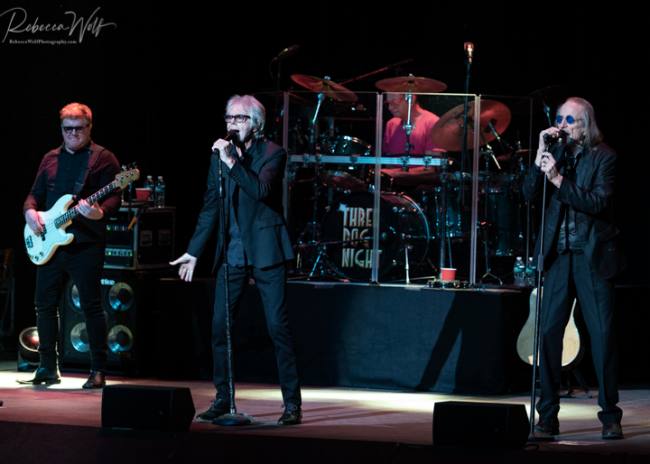 Three Dog Night, an American rock band formed in 1967, scored 21 Billboard Top 40 Hits between 1969 and 1975, including 11 Top Tens, 3 of which reached number one. While these songs were written by outside songwriters, the velvet, soulful voices, the vocal arrangements, and the harmonizing of the three original lead singers, Chuck Negron, Cory Wells and Danny Hutton, brought the songs to life and earned the band 12 gold albums. In 1969, “One” (by Harry Nilsson), became the band’s first Top Ten Hit, while a year later, the band hit number one with Randy Newman’s “Mama Told Me Not to Come.” In 1971, Three Dog Night had their biggest hit with Hoyt Axton’s “Joy to the World,” which spent 6 weeks on top of the pop charts. “Black and White” (by David Arkin & Earl Robinson) was the band’s final number one in 1972, followed by 1974’s Top Ten, “The Show Must Go On” (by Leo Sayer.) Unfortunately, issues amongst band members led to Three Dog Night’s dissolution in 1976.

In 1981, the band reunited and over the following four decades remained active with various original/early members, as well as new members, who replaced those no longer present due to personal struggles, illness and death. Over these years, Three Dog Night released several albums (including live performances and compilations) and continued to perform about 90 shows a year until 2020. During the pandemic band members worked on their first album of new material since 1978, “The Road Ahead,” which is soon to be released. They returned to touring in Spring 2021.

Of the three original lead singers, Danny Hutton is the last remaining Three Dog Night vocalist. Currently, he is the only original band member, as guitar player Michael Allsup (still part of the band) is sitting out this tour. With Allsup not present, the band’s bass player, Paul Kingery (who joined in1985) has replaced him on guitar, and Tim Hutton (Danny’s son) has stepped in on bass. Additional band members include drummer, Pat Bautz, with the band for 28 years, as well as vocalist David Morgan (2015) and keyboardist Howard Laravea (2017).

On November 3rd, as the lights rose onstage at the Bergen Performing Arts Center, the hush in the theater turned to enthusiastic applause as the band entered the stage. With their wide range of hit songs, and impressive vocal harmonies,Three Dog Night fans often come to see live performances for the nostalgia (it’s the “real” band), and for the hope of hearing the band’s original sound. However, equally, if not more essential to many audience members (some of whom have limited knowledge of the band’s original or current line-up), is just the desire to hear the band’s beloved songs (regardless of the number of original members). With songs spanning the gamut from the energetic, upbeat, “Joy to the World” and “Mama Told Me Not to Come,” to the soulful, passionate “One” and “An Old Fashioned Love Song,” to the gorgeously heart-wrenching, “Easy to Be Hard,” Three Dog Night’s songs mark a time in a one’s life; they take a listener back to a moment, a place, even an alternate emotional state. It was with this anticipation that Three Dog Night fans cheered the band’s entrance.

Like the original band, the current incarnation of Three Dog Night showcases three lead vocalists, presently Hutton, Morgan and Kingery. While each vocalist had the opportunity to demonstrate his individual vocal abilities during the set, it was their powerful, full-bodied voices, singing in three-part harmony during various moments in the performance, that were the most stirring. One only has to listen to “Shambala,” “Celebrate,” “Black and White,”  (amongst others), to bear witness to their beautiful harmonies.

It was hard to believe Morgan is a newer member, as his passion and vocal connection to the songs gave the overwhelming impression that this music had been a part of his repertoire for decades. Moving about the stage Morgan looked a bit physically weakened, having recently recovered from a hip injury. However, there was nothing weak about Morgan’s voice, as he showcased strong, dynamic, gritty vocals during “I’ve Never Been to Spain,” and harmonized with Hutton, during the hauntingly beautiful, “Easy to be Hard,” a song which allowed both to display their soulful, powerful vocals.

After more than 50 years in the band, Hutton’s continued ability to hit and sustain the higher notes, during “Black and White,” as well as the warm, rich notes of “An Old Fashioned Love Song,” was impressive. Standing front and center onstage, it was obvious that Hutton still loves Three Dog Night and performing for their fans. “We had a number of gold records and this one was our first gold single,” Hutton proudly shared. “It’s from 19…. from a looong time ago,” he chucked, to the roaring laughter of the crowd. As keyboardist Laravea began playing the first repetitive, rhythmic notes, easily identifying the band’s hit “One,” applause spread though the audience, and Kingery’s powerful voice emanated from the stage.  With Hutton and Morgan joining in, the trios dynamic sound filled the room.

Awaiting the release next month of their first new album since the 70s, “The Road Ahead,” the band shared “a very special song. It’s about the children around the world,” explained Hutton.  “It’s very appropriate for the current state of our world. It’s called, “Prayer of the Children.”” Solemnly standing along the stage front and singing accapella, the three lead singers were vocally joined by the younger Hutton. The crowd remained transfixed, taking in the gorgeous harmonizing of the four singers. As the keyboard joined in, a hymn-like spirit filled the room, resulting in a thunderous standing ovation. As “Joy to the World,” ended the evening of nostalgic music, all in attendance wholeheartedly sang along with arms raised and joy in their hearts.

This evening of Three Dog Night music was about hearing and reliving beautiful songs…and in essence, beautiful memories. What a pleasure. Days later and these songs still haven’t left my head. Now that’s what a concert is all about! 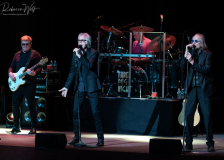