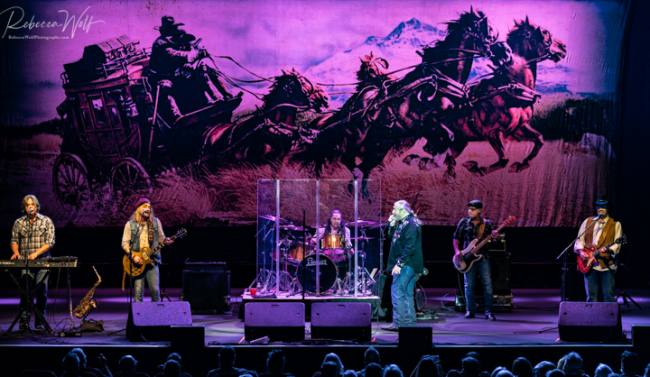 The Marshall Band & The Outlaws

On Friday, October 15th, at Mayo Performing Arts Center, all evidence pointed to the fact that avid Southern rock fans need not reside in the South, they are alive and well and adore Southern rock music, right here in the Northeast. The headline act of the night, The Marshall Tucker Band, had been rescheduled due to the pandemic and was originally slated to play with the equally illustrious Charlie Daniels Band. To the dismay of all, Charlie Daniels passed away due to a stroke, on July 6, 2020, at 83 years old. While no one would ever attempt to take the place of the Charlie Daniels Band, the perfect way to complete this musical event was to add a band to the bill with a 45 year history of Southern rock greatness. This incredible addition was The Outlaws.

With venues, bands and fans slowly reemerging into concert mode, shows often remain at less than full capacity. However, that was not the case on October 15th for The Marshall Tucker Band/ The Outlaws performance. On this evening, the venue was at full capacity and the crowd was in full spirits. From the moment The Outlaws entered the stage to begin this night of Southern rock, the audience was completely engaged and invested. Equalling the enthusiasm of the crowd, the band’s high-voltage electricity was instantaneously felt throughout the room from the band’s opening number, “There Goes Another Love Song.”

At center stage, the band’s only original member, singer/guitarist, Henry Paul, demonstrated incredible energy, vocal abilities and musicianship. There was no indication that 45 years in the business had diminished his performance abilities or musical skills. While the remaining five band members are “new” additions, with bass player, Randy Threet, and keyboardist, Dave Robbins (longtime members since 2005), all indicators pointed to the fact that the music of The Outlaws is in the heart and soul of every band member.  These are down home, Southern rock guys, with a palpable connection between them. With three guitar players and one bass player, the foursome frequently jammed together at the front of the stage, seemingly having as much of a blast as their audience.  Enthusiasm radiated from their faces and bodies, as much as from their instruments.

Bass player, Randy Threet, is everything you’d envision a Southern rocker to be, with his jeans, cowboy boots, and long hair….perfect for his incredible, gleaming hair flips.  Guitarist and sometimes lead singer, Jeff Aulich’s passion was obvious not only in his beautifully smooth and powerful voice, but in the lightening speed in which he played the guitar. Watching Aulich play, it was impossible to take your eyes off him; it was as if his fingers had a life of their own and brought Aulich along for the ride.  Aulich’s voice, on the higher end, perfectly harmonized with the deeper, raspier voice of lead singer/guitarist Henry Paul. While Paul’s voice has a raspier tone, “It’s About Pride,” showcased a beautiful, lighter, more melancholy quality and feel.  Not only did  Aulich harmonize perfectly with Paul, but with Threet as well, as the band showcased their incredible three-part harmonies,

While it was beautiful hearing the three voices and guitars melding together, the fourth player, Jimmy Dormire, added another dimension of guitar expertise. When Dormire stepped forward to play a guitar riff, this seemingly mild-mannered man, wearing circular sunglass and a black skullcap, became a speed demon on the strings. To the cheers of the crowd, Dormire’s fingers were on fire, although he never altered his calm external demeanor. Although, it was thrilling to watch each individual musician perform, when the guitar-playing foursome stood across the expanse of the stage front, it was impossible not be fixated and enthralled by their electricity and skill.  Drummer, Jaran Sorenson, was not one to be left out of this passionate display of musical passion and power. While a drummer can carry the rhythm of a song…and can frame the music with the beat of their drums, Sorenson’s thunderous drumming added a whole layer of energy, especially during “It’s About Pride,” which brought fans to a roaring cheer. Throughout the performance, keyboardist Dave Robbins, beneath his large, black cowboy hat, could be seen intently focusing on the keys, as his fingers quickly moved along the length of the keyboard.

The band’s shortened set (as the opening act), included “There Goes Another Love Song,” and “Stick Around for Rock and Roll,” both displaying their incredible harmonies, “Dixie Highway,” the title song from their new album, highlighting Paul’s powerful, raspy tone, as well as  “Green Grass and High Tides” and “Ghost Riders in the Sky,” both showcasing amazingly long, fierce guitar jams, that left the entire audience cheering and on their feet. Yes, The Outlaws are a band with incredible vocals…..but this is a band with insanely amazing guitar jams! I don’t know when, if ever, I’ve seen a band with a quartet of players jamming like this. I’m going to admit, this was my first experience with The Outlaws and their music…45 years late to the party!! I am happy to have discovered this treasure and will not be missing this party again!!

The audience was already on a high from The Outlaws performance, and were bursting with excitement, when The Marshall Tucker Band hit the stage. Applause and cheers welcomed last original band member, Doug Gray. Thanking everyone for coming to this rescheduled performance, Gray expressed his sorrow about losing his dear friend, Charlie Daniels, and expressed gratitude that The Outlaws had joined them on the tour…to more audience cheers.

“February 15th we will be around 50 years!” exclaimed Gray.  Gray was very relaxed on stage and loved engaging with the audience. It was obvious he wanted to connect with his fans, share his 50 years of music and just have fun. “You’ll come visit me in South Carolina and I will buy you’ll a drink. Just remind me that you were here and it’s on me,” he stated. If this was at all possible, you could tell Gray meant it. It was equally obvious the audience members were as enthused to be sharing this moment in time with Gray and The Marshall Tucker Band.  Between each song there were plenty of shouts, hoots and cheers, and the spirit on stage and in the crowd gave the sense of being surrounded by that Southern feel. Gray, with a grin on his face, appeared to love the acknowledgement…..even that coming from an overly boisterous “gentleman” in the back, who Gray amusingly responded to with, “Ahhh, just ignore him!”

Although Gray is the band’s only original member, their sound and feel remains amazingly authentic. Lead guitar player and vocalist, Chris Hicks, has a rich, bluesy sound which paired well with Gray’s deeper, more gravely tone. With his denim vest, yellow, circular-lens sunglasses, cap, and long hair, Hicks gives that overall  60s/70s vibe. As he jammed on the guitar, the expressions on Hicks’ face and the groove in his moves, were perfect indicators of how he embodied the music. Exceptionally impressive to watch as well, were the diverse musical skills of multi-instrumentalist Marcus James Henderson. Henderson seamlessly moved between the keyboards and flute, and even threw in some sax. When thinking about a passionate rock flutist, what typically comes to mind is the amazing Ian Anderson, of the legendary band Jethro Tull. Well, Henderson was equally as masterful and engaging with his rock and roll fluting. During “Take the Highway” Henderson jammed with Chris Hicks (a cool flute – guitar jam), while showcasing his beautifully rich voice, as he effortlessly transitioned between the flute and vocals, then returned to the keyboards….all within one song.

Throughout the hour and a half set, Gray’s energy and spirit never wavered. If he was not singing he was moving about the stage and accompanying the musicians on his tambourine. Revving up the ever-adoring crowd, Gray shouted, “We are going to have a good time tonight! Why are we going to have a good time? Because we are going to do a song that has meaning & feeling….maybe we should all learn that!” To ongoing fan cheers, Hicks sang a gorgeous, rendition of “Georgia Moon,” while Henderson accompanied on sax, and bass player, Ryan Ware, added an additional layer of rhythmic dimension.

“I have a surprise,” chuckled Gray. “Something we haven’t done in 4 years! But….we are going to do it anyway,” he said with a broad grin, as the band began playing “Cattle Drive.” Opening with a drum solo that highlighted the expertise of drummer B.B. Borden, the audience cheered their enthusiasm, as they did for each and every song, including the gorgeously harmonized, “Fire On the Mountain,” and band hits, “”Heard It In a Love Song,” and “Can’t You See,” the latter two bringing the loudest applause, and voices singing out in the crowd.  This audience participation was in full force for “Can’t You See,” as Gray encouraged fans to join in for the first verse, and all in attendance eagerly obliged.  As Gray and Hicks took over the lead, Hicks’ beautiful voice grabbed the reins for the upcoming verse, while Gray paraded around the stage with his tambourine.  Unexpectedly, as the following verse began, the lead vocals were taken over by guitar player, Rick Willis, with an incredibly powerful, bluesy, soulful sound.

As the show came to an end, audience members gave a standing ovation, cheering as Gray saluted the crowd and exited the stage. Fifty years, and these die-hard fans remained as passionate about Doug Gray, The Marshall Tucker Band, and Southern rock as they’d ever been. It’s just a reminder, that no matter where you live, North or South, East or West, or how much time has past, the music that’s in your heart and soul goes with you, and stays with you! 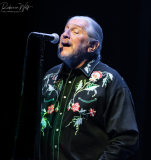 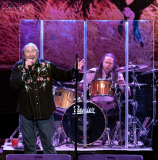 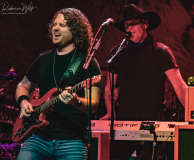